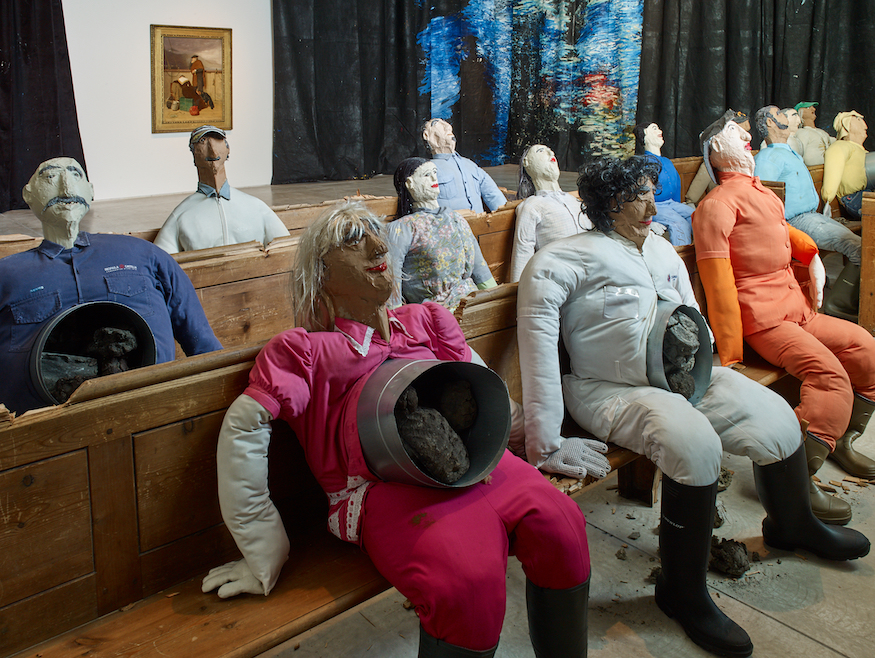 Now what’s wrong with that? Surely it’s a lovely gesture and comes at a time when, as the winners stated, there is “already so much that divides and isolates people and communities”. Host Edward Enninful particularly called out politics as a dividing force and it does feel like both sides of politics here and abroad seem to be pulling further apart.

The statement of the collective also calls out competition, capitalism and the impacts of the Conservative Government. So they want there to be harmony and a lack of division in the world … as long as it’s a Socialist one? It’s true to say that if everyone agreed with their world view then there would be less division, but I’m pretty sure that’s not how democracy works. The statement could only have been made more political if they held a giant picture of Corbyn aloft as they made it.

That’s not to say I necessarily disagree with their views, it’s just that following a lot of artists on Twitter has made me realise it’s about as left leaning a profession there is — so much so that in comparison I often come across as a raging capitalist, even though I would consider myself left of centre.

That’s not to knock any artists who are left leaning, but the divisions cited by the collective in their speech are not going to be mended by those who claim that Socialism is the only way. Particularly as the consensus of the wider public tends to be in the centre of the political spectrum, we never hear from them because they don’t shout particularly loud on social media.

Now we’ve dealt with the politics let’s look at the decision and what it means for the Turner Prize.

The decision to split it four ways is unprecedented though it’s worth noting that in 2016 Helen Marten split her prize money equally among the shortlist, even if she didn’t share the accolade. There was a joint winner of the Booker Prize and hell there have even been joint winners of The Apprentice.

True the nominees writing to the jury to request it be shared is a new move but I first came across this bold move in an episode of The Simpsons. Bart Simpson and Todd Flanders decided to share the honours at a miniature golf tournament — I would love it if the artists got this idea from The Simpsons.

The cynic in me saw this as an opportunity for the jury to make the prize relevant again. Remember the controversy that Tracey Emin’s unmade bed caused when it was first displayed? In comparison, recent contenders barely raise an eyebrow. Arguably because we’re much harder to shock these days.

Previous winners like Antony Gormley and Grayson Perry are now household names, and so is Emin even though she didn’t win. But look back more recently and even those of us in the art world are wondering what Martin Boyce (2011 winner) and Duncan Campbell (2014 winner) are up to now.  The Turner Prize has lost its heft and this proposal by the nominees was a gift of guaranteed publicity that would’ve been hard to turn down.

So what next for the Turner Prize? Shall we ditch the award and just make every year’s four nominees a joint winner? I have found it strange that the same jury picks both the nominees and the winner and I’ve always suggested the winner should be based on a visitor vote. It feels like the time is right to reinvent the prize and it just so happens that I wrote a piece on exactly this topic a few year’s ago.

Let’s not forget that if there were no competitions then all of the artists nominated wouldn’t get the publicity and the career springboard it can bring — competition isn’t always perfect but it does offer great exposure for artists. I opened this article by saying everyone won, but let’s not forget that there are still ‘losers’ – all the artists that weren’t nominated. If the aim is to be more inclusive then making the shortlist longer to include more artists would be a better way of doing it than splitting the prize equally.

This shared win isn’t really going to change up the Turner Prize but there are plenty of ways that it could get the shake up it deserves. I’ve offered my thoughts on the prize but let me know yours. I’m sure there are other great proposals for reforming the prize out there.

For more in this series, see my thoughts on artist’s request for feedback, the reaction to the shredded Banksy, #FriezeWeek, Blockchain hype, Finding art, Private views, Art itself, Appointment only exhibitions, Artificial Intelligence replacing artists, Everyone’s a Critic, Photo London, The Turner Prize, Art for art’s sake, Conceptual art is complicated, Condo, How performance art is presented in museums, Frieze week floozies, too much respect for an artist’s legacy, opinions not being welcome, an exhibition across three countries, tackling race and gender in art, artist-curators, art fair hype, top 5s and top 10s, our political art is terrible, gap left by Brian Sewell, how art never learned from the Simpsons, why artspeak won’t die, so-called reviews, bad reviews are bad for business, the $179m dollar headline, art fairs appealing to the masses, false opening hours, size matters and what’s wrong with video art.