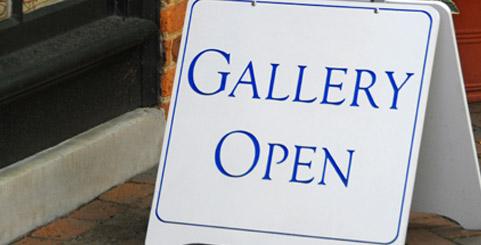 It’s important for major museums and galleries to let people know when they are open, it’s extremely annoying to turn up and find a place closed. That’s why the details can be found on the website and any other closures for private functions or due to installing a new exhibition are advertised on the site or via social media.

This isn’t the case for commercial galleries where what the website says should not always be taken as read – a correct interpretation for some galleries would be ‘these are the times we are open, but it purely depends on whether we feel like opening on that day’. It’s unfair to tar all commercial galleries with this brush as many are very good at keeping potential visitors informed but the offending galleries (who shall not be named) see no need to be quite so generous.

This problem seems to affect everything from some high end Mayfair galleries down to some of the smaller ones. The reasons can be that the person who is due to open the gallery has been delayed (we’ve all had transportation issues) but often it may be something as simple as we’ve all decided to take the bank holiday weekend off and can’t be bothered to tell anyone. Updating a website or posting on twitter is not particularly difficult to do and so this just feels lazy.

Many a time have I gone to a gallery that should be open, often having gone out of my way to get there, to find it closed with shutters down and nobody answering the bell. Many galleries would like everyone to phone up before they visit but that’s not realistic.  And if lengthy opening times are an issue then there’s no harm opening a few days of week and making other times appointment only.

I shall not name and shame the offending galleries but the question to ask is whether you’d accept this behaviour from a retail store. The answer is clearly no, so galleries should be held up to the same ideal.