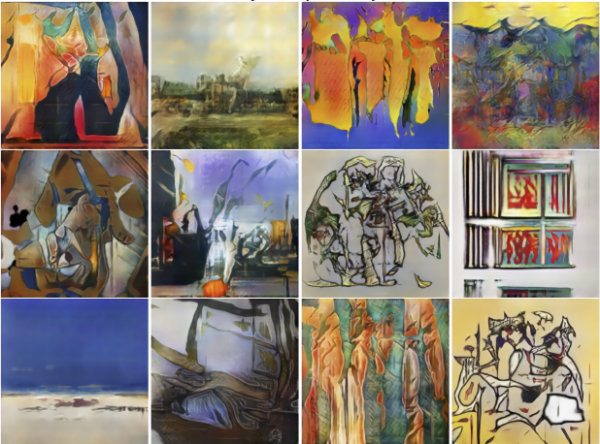 There have been several learned scientists and entrepreneurs warning us that automation will replace all our jobs, from machines replacing factory workers and surgeons, and artificial intelligence replacing journalists and lawyers.

What these articles tend to conclude is that we’ll all become artists, because creativity is one thing the machines can never replace. But is that really the case?

True, machines will struggle to start creating art from scratch, but the world is filled with art that it can use as a reference.

Imagine this future. I’m sat at home ‘walking’ through a virtual recreation of Tate Modern. Wearable technology monitors my pulse rate, pupil dilation, brain waves and breathing to determine which works I’m enjoying the most. It then uses this data to tell me where to go next based on what works in the Tate collection it thinks I will enjoy the most.

Using this information the next time I visit any museum anywhere in the world, I’ll get a route planned out for me based on my personal taste in art.

What’s so powerful about the above example is all of the technology exists today – it’s not like we need some fancy new inventions to get us there, just some improvements in user interface and a slight drop in the costs of technology and we both know from previous experience that both of these changes will happen.

Real world examples include the recommendations we receive for products from Amazon, movies on Netflix and music on Spotify. This is all done by algorithms and it’s part of our daily lives. In fact I’m surprised that Instagram isn’t already recommending local exhibitions to visit based on what you’ve posted.

If machines can predict the type of art I like, then it’s only a small step before they can create art that they think I’ll like – and in all likelihood faster and cheaper than a human artist could. It could tap into subconscious biases that I don’t even know I have – maybe I prefer the colour red to blue in my art.

Some studies are already showing that humans struggle to determine whether art is computer generated or made by a human hand.

But what about the surprise factor? One of the great aspects of art is you get taken aback by a piece that you weren’t expecting. Surely if an AI is creating art based on my preferences it will simply reinforce what I already like? Will we just end up works in the style of Warhol, Monet and Pollock?

Take a look at Spotify’s ‘Discover Weekly’ feature which picks a sample of tracks and it keeps it varied to whet your taste for a genre you may not have considered before. So if you have a strong preference for portraits then an algorithm can throw an abstract work your way every once in a while just to see if you may be tempted by different works. By constantly refining the algorithm, it will keep the ‘surprises’ at just the right level for you to feel fulfilled by the art that you see.

In case you are wondering, all of the images in the lead picture for this article were created by machines.

The one part of art that appears immune to automation is the artist herself. You can create a work using a robot but we don’t just love an artwork, we love the story behind it – the ideas, the struggle and the emotions that went into it.

But could that be replaced too? When we walk into an exhibition, see the work and read the press release we assume it’s a person who wrote those words that reach out to us. But we can’t guarantee it and in most cases we haven’t even met the artist whose words and works moved us.

For all we know we’ve seen works created by machines, read a press release written by a bot and the artist could just be the face that we’re identifying with. If you’ve seen the movie Rogue One, you’ll know we’re not far from creating computer generated faces that look human so we could replace the human face too.

I’m not advocating replacing artists with machines; simply that it’s inevitable that at some point we’ll be hanging art on our walls made by machines.

There may be some people reading this thinking ‘I will never buy art made by a machine’, as it just won’t have any ‘soul’. It’s worth noting there was a time when people were shocked by the idea that human interaction could ever be replaced by machines – and yet here we are using self-checkouts at supermarkets and letting algorithms decide what film we should watch tonight.

As the change is inevitable I’d like to see this embraced a bit more, with artists collaborating with machines to create art — see Siebren Versteeg’s paintings as an example. There are very few people in the art world looking at this right now and we all may have a Kodak or Nokia moment when we realise too late that the traditional model of an artist has been leapfrogged by technology. London has hundreds of exhibitions a year and I’m yet to have seen one where the creative sides of machines have been let loose.

The future may be intimidating but let’s see if we can’t embrace it and bring greater diversity to art. At least until the robots replace us.

For more in this series, see my thoughts on Everyone’s a Critic, Photo London, The Turner Prize, Art for art’s sake, Conceptual art is complicated, Condo, How performance art is presented in museums, Frieze week floozies, too much respect for an artist’s legacy, opinions not being welcome, an exhibition across three countries, tackling race and gender in art, artist-curators, art fair hype, top 5s and top 10s, our political art is terrible, gap left by Brian Sewell, how art never learned from the Simpsons, why artspeak won’t die, so-called reviews, bad reviews are bad for business, the $179m dollar headline, art fairs appealing to the masses, false opening hours, size matters and what’s wrong with video art.