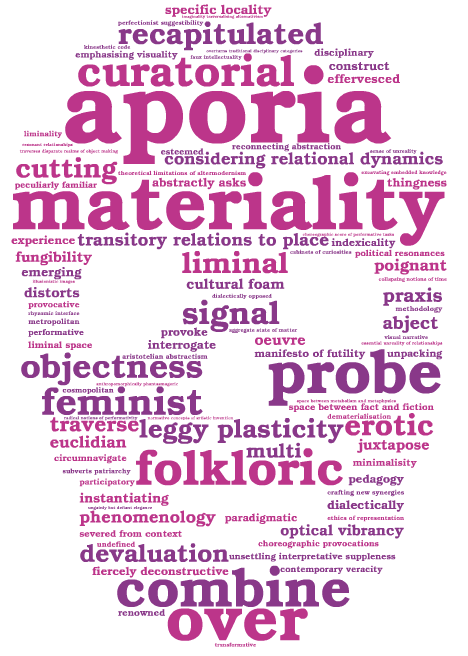 Susan Jones recently wrote an excellent article for the Guardian on ditching the phenomenon of artspeak.  It’s so ingrained in the art world it’s a language unto iteself, often referred to as International Art English.

But she is not the first writer to make a case for using simpler words where possible, speak to many critics, gallerists and artists and you’ll get the same message – it’s all very much Emperor’s new clothes and it needs to go. But these conversations haven’t been happening for several years, so why has there been no change?

The corporate world has embraced the KISS (keep it simple, stupid) principle and if any managing director of a major (or even a minor) corporation receives a report full of  flowery language, she will bin it and ask the employee to write it again and get straight to the point. So why does it persist in the art world?

The art world has essentially two halves, the academic side and the commercial side, and both of these have a vested interest in ensuring artspeak persists. I have tackled each one separately below.

The academic art world, much like any branch of academia, has those who speak a different language to anyone else. This is why professors in any scientific field are rarely the ones who write about discoveries in the newspapers. But academics in the arts are poorly paid and so need side jobs to pay the bills and these usually involve writing press release, catalogue essays and reviews. This leads to a propagation in artspeak – we’ll come on to why galleries prefer this style of writing shortly.

The academic art world is very much under threat as more and more artists eschew a formal art education and go straight to producing artworks without being fully versed in art history. The academic fight back has been to label this as ‘easy art’ – everyone gets it and therefore it lacks a deeper meaning. But to stand by this argument requires the academia to delve even deeper into making art even more difficult to understand. This results in a stronger focus on conceptual art and the use of long words to obfuscate the fact that the ideas behind the work aren’t actually that complex.

The commercial world on the other hand thrives on the mystique that artspeak brings with it, nothing sells like something shiny (see Jeff Koons) and if the work isn’t shiny then the words that go with it better be.

The truth is many collectors don’t really understand the art they buy, they’ve been advised to purchase it. But it’s important that they can ‘sell’ this work to other collectors when they’re discussing it over champagne and caviar (or similarly expensive foods and wines). Let’s face it knowledge is power and if you can convince somebody you know something they don’t, then you feel powerful. This appeals to many wealthy collectors as many are insecure and egocentric, after all very few people get rich caring about others.

So a gallery will invest in writers that are fluent in artspeak to give their works some extra gravitas and therefore lift its prices. But at the same time they will only advertise in magazines that are written in artspeak and the collectors will only read these publications. So we end up in a vicious cycle whereby everyone is trying to out-artspeak everyone else.

The only way to break the cycle is from within, but to get inside a person needs to be well versed in artspeak and it’s hard to enter the circle and not get brainwashed into dropping ontological into every other sentence. It takes bravery to challenge the established order, but let’s start by asking everyone who speaks artspeak to explain themselves again, until they get the message that we see through their nonsensical ramblings.