The exhibition, Gardens of FELT Zine Delights, is a simulated world, video series, NFT collection, and interactive experience inspired by classic icons from Hieronymus Bosch’s famed triptych, The Garden of Earthly Delights (1490 – 1510). The project stemmed from a collaboration between Mark Sabb (Concept and AI Art), Ty Vadovich (3D Artist), and Max Bochman (Web3 Developer). FELT Zine’s Gardens will debut at Gray Area on August 25th and will be open to the public through September 13th, 2022. To celebrate this moment, Gray Area and FELT Zine will partner for a night of music and immersive visuals to close out the exhibition on September 9th, 2022, featuring a curated lineup of performances by Dev Moore, Lil Ze, nextdimensional, and RITCHRD.

Located in a newly renovated space in Gray Area’s current home in the Mission District’s Grand Theater, the new Gray Area Gallery continues the tradition of making genre-bending work accessible to the public with this inaugural exhibition by collective FELT ZINE.  An internet art collective focused on creating digital and in-person experiences that examine digital activism, hip hop culture, race, gender and class, FELT Zine was founded a decade ago to give voice to art that wouldn’t likely be embraced by traditional galleries or museums.

FELT Zine is dedicated to widening the conversation around digital art, and allowing space for art that hasn’t been considered critically, and artists outside of the traditional art world circuit, to be taken seriously and included in the discourse. We represent those kinds of artists. We are those artists. We consistently discover those artists, present those artists, and elevate their work. But we’re fundamentally artist-led and driven by our enthusiasm for very interesting, dope projects. It just so happens that when you’re open to widening the playing field, you’re probably going to discover some really interesting artists and ideas along the way. Gray Area Gallery exists to show this exact type of boundary-breaking, experimental art, so we are excited to kick off their exhibition programming and amplify our shared value to the communities we serve.

Gardens of FELT Zine Delights, though originally conceived as a series of 3D-rendered sculptures and animations to be released as a collection of NFTs, has evolved into a fully developed interactive world built using a video game engine. In this fantastic environment, FELT Zine brings imagery that has been solidified in both art and popular cultural history into a contemporary canon with current visual vernacular that speaks to modern experiences with screens: meme aesthetics, video game graphics, and algorithmic feed-space.

Playing cards and their four suits—diamonds, hearts, spades, and clubs—take a central role in Gardens of FELT Zine Delights. In much art during Bosch’s time, each of the playing card suits connotated strict religious and patriarchal themes. Breaking out of this context, FELT Zine disrupts the heavy-handed imagery in Bosch’s work with simulated, internet-culture aesthetic references with specific nods to the vaporwave movement—of which FELT Zine was a founding conceiver in the late aughts—such as 3D tropical plants, neon color palettes, and shiny texture renders.

We are thrilled to premiere the Gray Area Gallery program with FELT Zine, a collective that represents the core ethos of the gallery and its founding in fulfillment of Gray Area’s mission. We wanted to create a space to highlight the cultural innovators of our community who are shaping the future of visual culture and cultural discourse. As a fixture of the internet art scene for over a decade, in San Francisco, on both coasts, and around the world, FELT Zine is of the utmost importance to the evolving legacy of our community. Cultural catalysts so often come from communities of color, and too often their contributions are erased or unseen. We are honored to offer space for the critical organizers of the FELT Zine family, who have continued to lead the way for arts and cultural groups everywhere.

In each video and still image output from the wider Gardens universe, certain content imagery—such as background textures—are fully generated by AI with no editing or interference from FELT Zine artists. Speaking to new modes of image-making taking hold of online communities across social media, particularly the rising popularity of artificial intelligence and machine vision tools like Open AI’s DALL-E, the Gardens of FELT Zine Delights is a modern visual culture touchstone for future web3 arts communities.

About FELT Zine:
FELT Zine is an experimental internet artist collective that produces web3 and metaverse projects rooted in the visionary work of underground cultural catalysts. FELT Zine hosts IRL art parties and curates exhibitions around the world. The collective was founded in 2011 as an independent fashion magazine, soon after transitioning into an art collective, and eventually 3D and digital art NFTs. @FeltZine / @feltzine / feltzine.us

Core Members:
Mark Sabb, is an artist, curator, and creative technologist. Mark is the founder of FELT Zine, an experimental internet artist collective that produces web3 and metaverse projects including NFTs. He was previously the Senior Director of Innovation at the Museum of the African Diaspora and established the Museum’s digital presence along with pioneering on-site AR/VR implementations. @markdigitalhd / @markdigitalhd

About Gray Area:
Gray Area is a 21st-century countercultural hub catalyzing creative action for social transformation. Our mission is to cultivate, sustain, and amplify a community of creative practitioners who apply antidisciplinary practice — including art, technology, science, and the humanities — towards engaging with the complex challenges facing our world. Through public events, education, incubation, and research, we maintain a platform that enables creators of diverse backgrounds and perspectives to transcend boundaries within deep artistic collaboration and gain agency to impact the world through category-defying work.

About the Gallery:
Gray Area Gallery is a permanent exhibition space within Gray Area’s current home in the historic Grand Theater on Mission Street, free and open to the public from 12-7 PM on Tuesdays and from 12-4 PM Wednesdays and Thursdays.

The new Gray Area Gallery continues the tradition of making genre-bending work accessible to the public. In tandem with broader Gray Area thematic initiatives, the first year of gallery curation will center the complicated tensions and surface areas between identity, representation, expression, oppression, and technology.

“I think the driving force behind creativity is the promise of eventual demise, and it is in the face of this that we keep creating.” 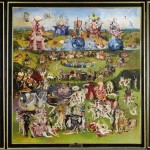 Wolfe von Lenkiewicz has transformed Bosch’s Garden of Earthly Delights into a post-historic, trans-cultural manuscript. At first glance von Lenkiewicz’s work appears to be a faithful reproduction of the original, but on closer inspection it is ‘contaminated’ with imagery from a wide range of historical and contemporary sources, both art historical and pop cultural. 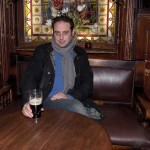 Day one: So, I arrived yesterday afternoon in New York at around 3pm, but didn’t actually get into the City […]