Here are some further examples, following on from last week. 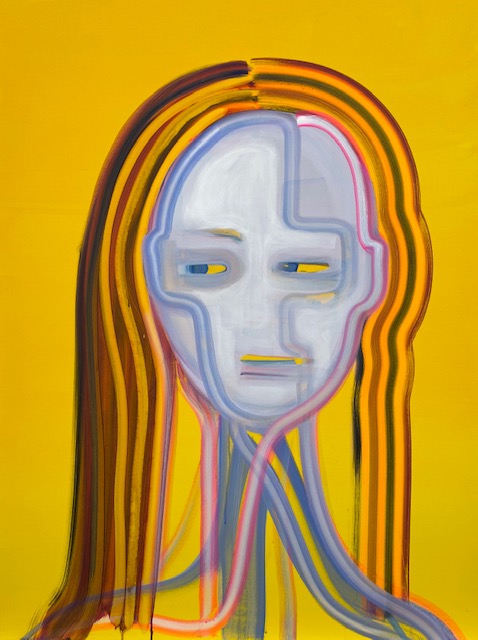 Canadian painter Wanda Koop is known for her environmentally aware landscapes, but during lockdown she has developed (see top and bottom) a stream of robotic humanoid heads. She sees them as ‘portraits of uncertainty – sort of like MRIs of the human psyche – for the past, present and future’. There’s a darkness to them, but not only that, and just now they resonate with how much of our contact is mediated through technology… 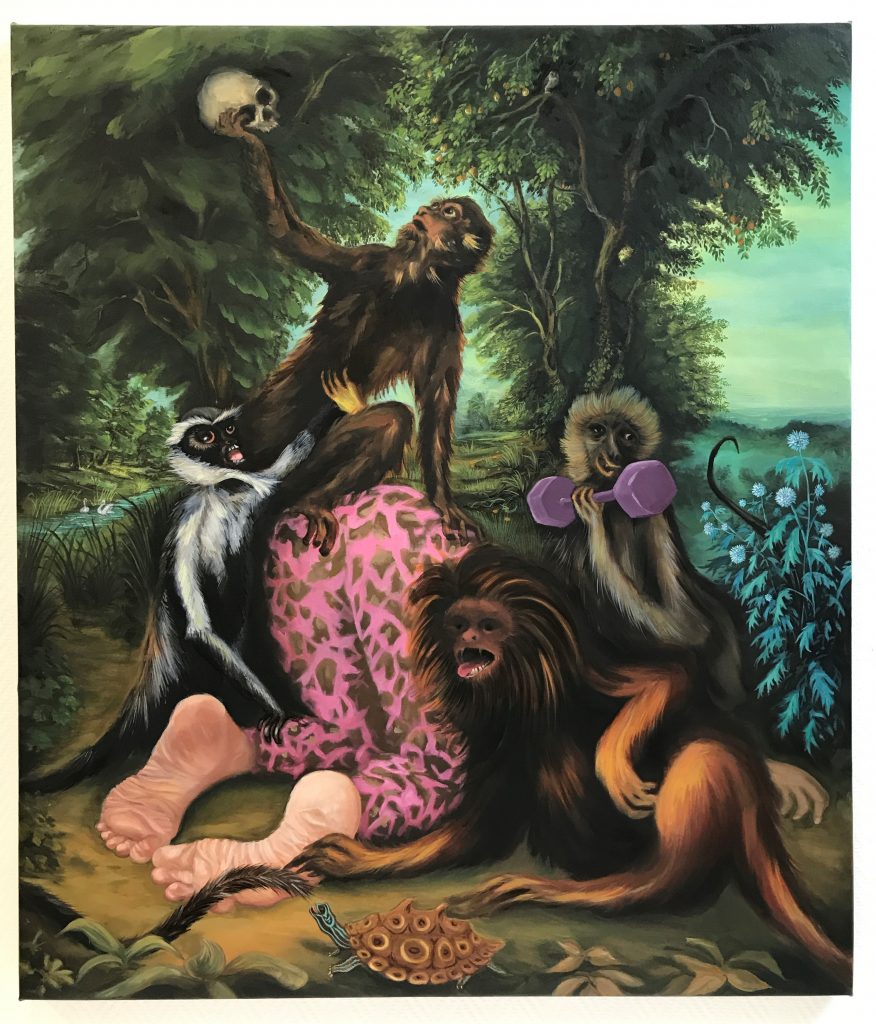 Sweden-based British painter Alex Hudson started Old Habits Die Hard, a fantasy of primates taking on human traits, just as the coronavirus impacted. He ‘imagined it to be about my own demons, ‘monkey’s on backs’ for example, and the perpetual search for transcendence and well-being’. A modern take on absurdity receives a staging which evokes both Frida Kahlo’s self-portraits and Frans Snyders’ mischievous monkeys from the 18th century. 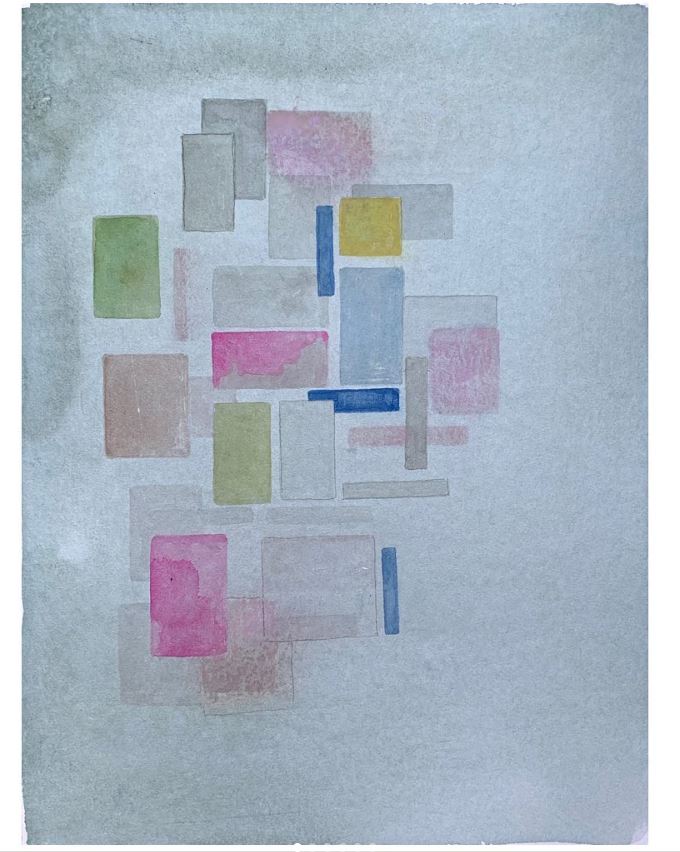 Michele Ciacciofera‘s  Untitled, 13.4.2020 is from the impressive sequence of ‘Confinement notes’ which the artists of Paris/Brussels Gallery Michel Rein is posting daily. On the one hand, a delicately tentative geometric abstraction which could have been made at any time; on the other hand the materials – ‘watercolour, gouache, red wine (Saint Nicolas de Bourgueil), salt, sodium bicarbonate and pencil on paper’ – are redolent of time at home rather than in the studio. 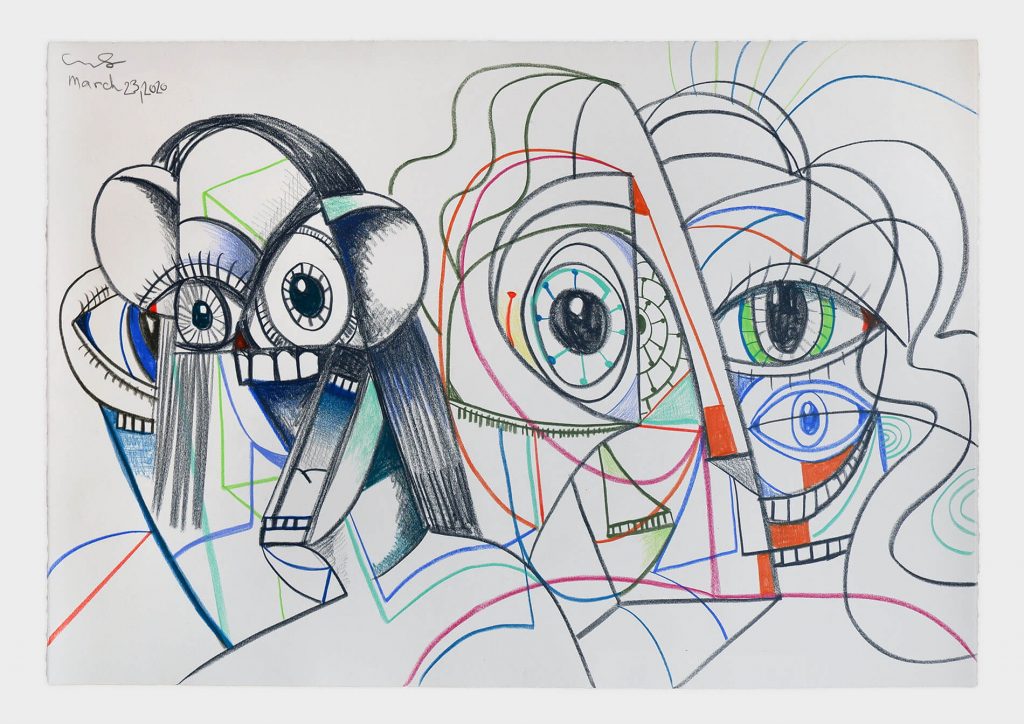 George Condo says of the drawings he’s made in lockdown: ‘I’m imagining figures who are distanced from each other… invented to resemble those I can’t see, and they somehow reflect my inner feelings about how it is to be left alone in the wilderness’. I guess Condo’s condo might be a fairly comfortable wilderness, but the multiple viewpoints work nicely to reflect different emotions occurring simultaneously, including fear, paranoia, claustrophobia, panic and distress. This is Parallel Lives. 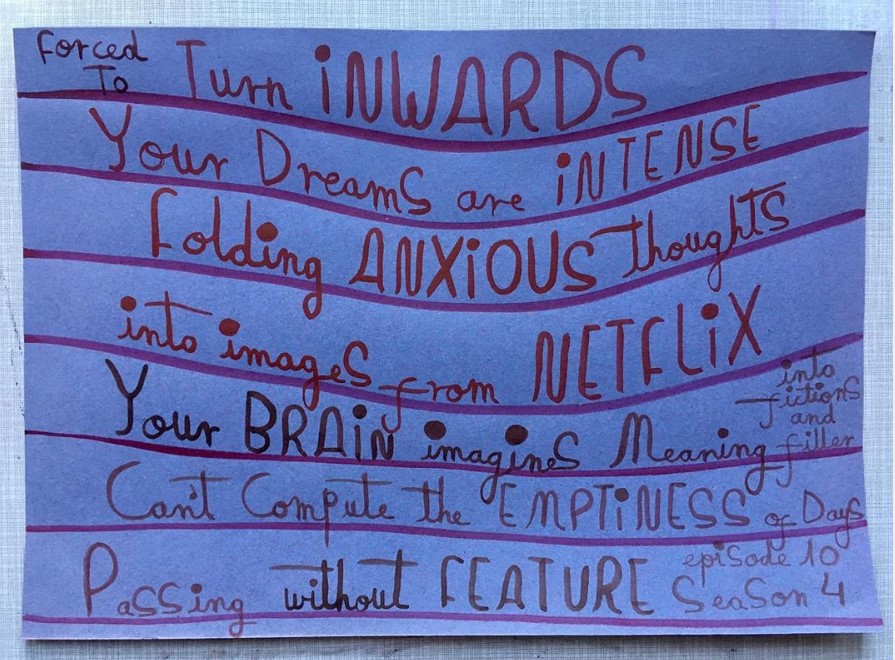 Recently announced Max Mara prizewinner Emma Talbot has started making animations in lockdown but also continues with her wider practice, which sometimes includes pure text works in which the words are not pre-planned but emerge as she paints them. Here she finds herself ‘forced to turn inwards’ and unable to ‘compute the emptiness of days passing without feature. Episode 10 season 4’. It’s not her everyday handwriting, by the way, but a mixture of upper and lower cases and differing sizes which she has developed to enable the maximum variation of emphases. 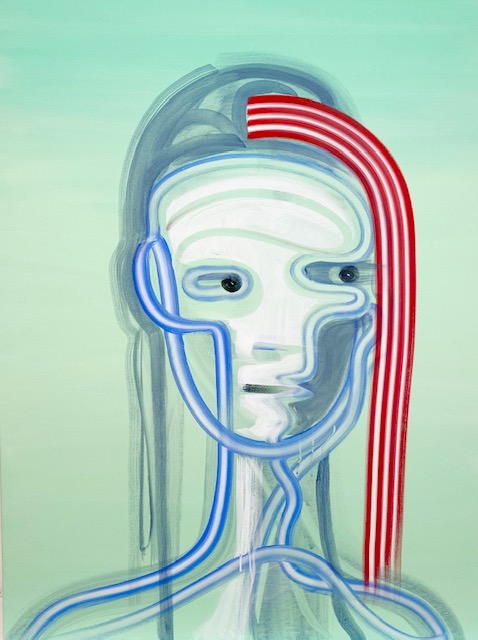