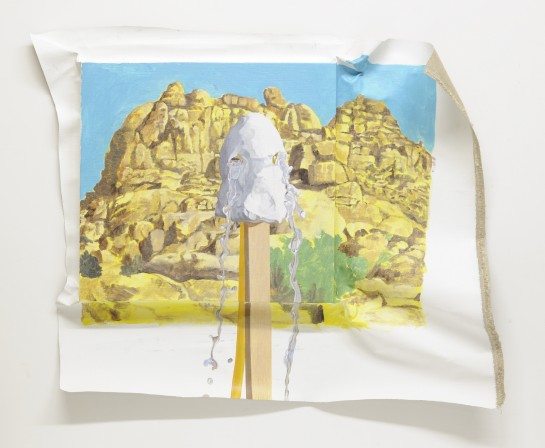 Masaya Chiba Crying face #2, 2011 Oil on canvas Courtesy of the artist and ShugoArts

Tonight at White Rainbow “by the mountain pat” previews an exhibition bringing to London work by some of the most exciting emerging artists based in Japan. Guest curator, Ellen Mara De Wachter, has selected six artists and collectives, none of whom have ever exhibited in London before, including: Masaya Chiba, Chim|Pom, hyslom, Hidemi Nishida, Ryohei Usui and Yui Yaegashi. Derived from a Basho haiku, the title, by the mountain path, may bring expectations of sublime landscapes, but it will instantly betray you when you step into the gallery space. Paradox was discussed often in the course of exhibition-making: the co-existence of the traditional and the contemporary; the intransigent social system versus the eagerness to adopt new technologies; the ability to work against adversity in extreme situations but the reluctance to speak out.These social contexts inform our understanding of certain elements of artists’ or collectives’ practice, yet their works reveal subtleties beyond binary oppositions. The artists do not set out to solve social problems through their practice, but instead reveal alternative perspectives. Some play the role of the wise fool, shifting focus between fictional worlds and the audience’s reality, bringing insight through wry intervention.By the mountain path presents an occasion for a non-Japanese curator to have a fresh look at the many different things that are artistically moving in Japan today. Rather than proposing any contemporary ‘Japaneseness’ the show presents a plethora as diverse as any other dynamic arts scene nowadays.