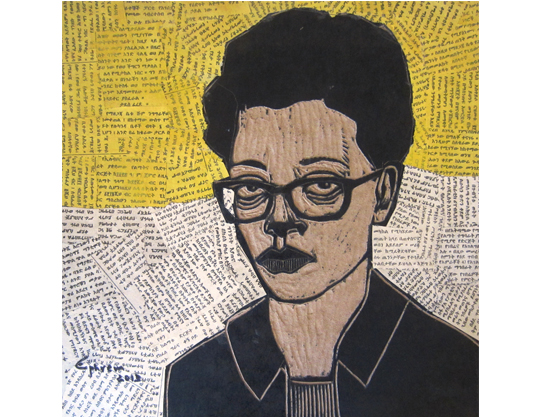 The use of surprising materials – from tyres to tadpoles to tampons – has long been a central feature of contemporary art, yet the novelties keep on coming. Two Africans currently showing in London are good examples. Young Ethiopian Ephrem Solomon (‘Untitled Life’ at Tiwani Contemporary to 29 March) makes woodcuts, but doesn’t print from them. Rather, he applies collages to the surface – cut-up texts which suggest his subjects’ lives may be hard to comprehend, as well as referencing the use of newspaper to cover the walls in poor dwellings – and also paints over both the wood and the newsprint. Solomon’s father was killed in the Civil War, and a mournful air spreads from the motifs of empty chairs to less obviously infected portraits. Ivorian Armand Boua (‘Enfants de la Rue’ at Jack Bell Gallery to 17 April) paints with tar as well as acrylic, but his choice of ground is the more unusual aspect: Boua portrays Abidjan’s streetkids on the battered cardboard boxes they use as makeshift shelters. A national trauma also lies behind these repeatedly scraped surfaces: many children were displaced in the turmoil which followed the disputed election of 2010. Moreover, both these artists’ particular personal materials serve to reinforce their depictions of lived realities. Ah yes: tyres as in Douglas White’s Icarus Palm, 2005; frog sprogs swim in Ed Kienholz’s The Tadpole Pool with Woman Affixed Also, 1971; and tampons form Joana Vasconcelos’ chandelier The Bride, 2010. 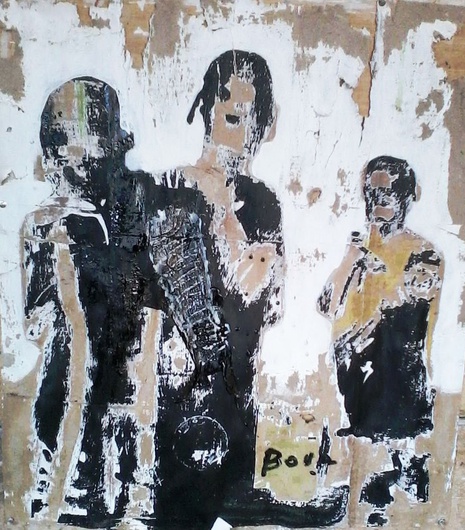