ART STUFF on a train # 23: ‘One Thing on Top of Another’ - FAD Magazine
Skip to content 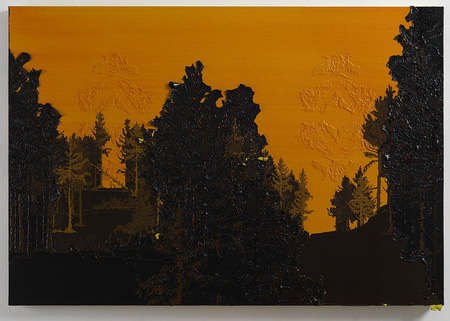 Life: it’s just one thing on top of another. And some sense of that is captured in two shows – within 200 yards – which come at the imagistic equivalent from opposite directions. The first applies then strips away layers away to reveal what’s hidden; the second over-determines the layes then selects which ones to emphasise. A ten year retrospective at Gimpel Fils (to 11 Oct) reprises how Hannah Maybank covers her canvases with variously-coloured acrylic over latex, then peels them partially back to reveal landscapes in which the curl of the surface operates both sculpturally – as shadows, branches, leaves – and metaphorically: where else do you find the past, but hidden beneath the present? At Hamiltons (to 1 Nov), the Swedish photographer Jacob Felländer gives us fifteen views out of the same window in New York. That may sound unpromising, but these are big, multiple photographs made by the slowed winding of an analogue camera, and Felländer has added paint and charcoal to bring selected aspects of the negatives to the surface, rather as you might heighten the pentimento of first thoughts covered over yet still visible in a painting. If space can drift over time, Felländer had wondered, thinking of the movement of continents, then could he capture time drifting over space? That one thing on top of another can have its attractions. 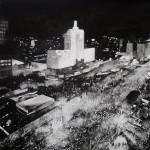