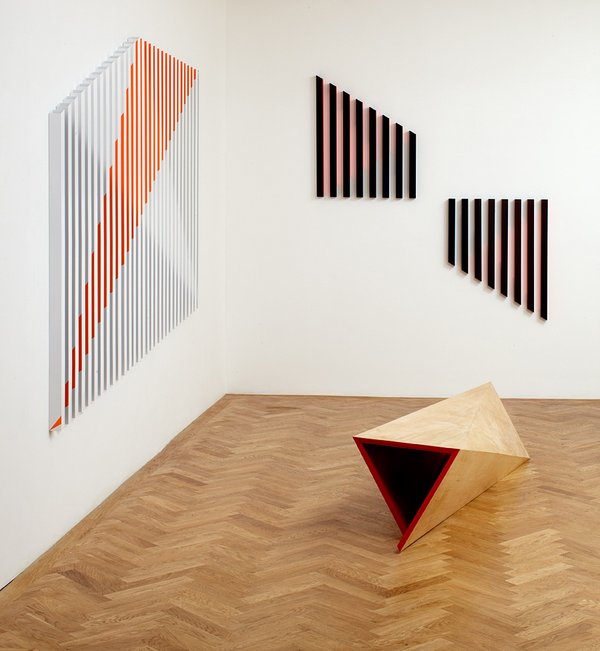 Like her overall practice, Rana Begum’s recent wall mounted metal works resist easy categorizations.
Though they combine elements of both sculpture and painting they remain resolutely neither, fulfilling the criteria of what Donald Judd, trying to theorize a way out of Modernism’s dead end obsession with medium specificity, famously termed “specific objects.” Like Judd’s Minimalist structures, they are, at their most basic, simply objects. And though Begum willingly attributes her longstanding aesthetic interest in simplicity, geometry, symmetry and repetition to childhood experiences of Islamic art and architecture she does not turn this into a fetish of identity, instead thoroughly assimilating it with lessons gleaned from subsequent entanglements with Minimalism and Post-Minimalism. In fact, the strength of her attribution, reinforced through her singular and restrained oeuvre, posits Islamic art as a viable and commonly unacknowledged source for many elements of Minimalist aesthetics.

Since 2009 Begum has made wall pieces made up of precise parallel arrays of bars of box section extruded aluminum, arranged vertically with equal spacing between them. While the earliest such works simply recreated the rectangular format traditionally associated with painting, recent, more complex, iterations have tested the limits of the pictorial through various irregular polygonal shapes. Industrially powder-coated in white or black these works register as Minimal monochromes when viewed frontally and from a remove. But Begum overlays multiple triangular forms onto these base structures by carefully painting varying heights of both sides of these bars in other colors. These shapes only become visible when viewed from appropriately oblique angles and though the works themselves are resolutely fixed they force the viewer to move back and forth in front of them. We become acutely aware that we are not disembodied eyes but embodied viewing subjects whose action and participation is necessary to complete the visual experience, and whose relative position determines what and how we see. As the privilege of single point perspective disintegrates into a multitude of possible viewing positions the experience of abstraction stretches beyond the instantaneity of the purely retinal into the expanded duration of the phenomenological.

Like soft neon, the vivid colors Begum applies to the sides of the aluminum bars radiate into the white spaces between them, conjuring up ghosts of these overlapping shapes. These phantoms disturb the fixed and opaque identity of abstract form by introducing a faint echo, an uncanny perceptual alterity that elicits a double take. As perceptual not material palimpsests these works require a pluralistic, and possibly, parallactic viewing sensibility that acknowledges and validates the importance of other perspectives, of multiple points of view, of different visions. They seem to hover or oscillate eternally between a transcendent presentness and an immanent contingency.

Begum’s other major body of work, her folded sheet metal works-in mild steel and mirrored stainless steel-manage to elicit many of these same perceptual effects despite their very different basic structure. These works emerged out of studies in paper used by Begum to develop a lexicon of triangles she could use for her box section extruded aluminum pieces. The studies were constructed through a series of simple folds of the corners of single sheets of A4 paper and Begum uses 1.2 millimeter thin sheets to retain their delicate but deliberate simplicity in the larger metal works. Colors are carefully applied to the outside and/or inside of the resulting triangular sections to create crystalline compositions made up of wedges of contrasting hues, bending forward into space, around a central shape that remains firmly and flatly attached to the wall. The simplest consist of most if not all the corners of a rectangular sheet folded once inwards, its front and back each painted a single color. Others are more structurally complex using multiple sequential folds, and different colors on the various triangular sections of the multifaceted surfaces that result. Still others, made from mirrored aluminum, add reflections to the heady mix of perceptual and planar fragmentation introducing visual complexity into the central polygon.

Folded back in, the outer edges of the frame, which usually indicate the threshold between inside and outside, begin to influence its inner geometries. The soft glow of color is smuggled into the space of shadows and opacities interrupt the spaces of reflection and the resulting structures are materially stable but perceptually labile. As the viewer moves across the work color, light, shadow and composition all shift. Again, the singular object is made plural; the viewer’s relative position to it at a given moment determines the specific composition perceived but positions and, hence, compositions are multiple if not infinite.

Some might dismiss Begum’s elegant work as optical illusions that merely trick the eye. Begum insists that they actually function in reverse, staking out the time needed to reveal all their truths, formal, structural and perceptual. Rejecting the illusion of simplicity, these works instead reveal the sheer complexity of our contemporary realities. Begum’s practice distinguishes itself from its Minimalist antecedents by enacting, through modes of perception, an acute awareness of the importance of multiplicity, contingency and oscillation, qualities she locates firmly in her daily perceptual experience of the sensorium that is urban London. But these qualities can also be understood as cultural values, which anchor an ethics of difference that privileges plurality over singularity, difference over identity, precarity over certainty, and mobility over stasis. Arguably then, Begum has developed her own sophisticated language of Minimalist abstraction-of form, structure, and perception-which deploys its universal address to full effect but retains hints of a politics of difference.

ART NEWS: BISCHOFF/WEISS: NEW exhibition marks a new beginning as an art consultancy.
ART STUFF on a train # 18: ‘How Much Is Not Enough?’
Nathaniel Rackowe – reflections on space at Bischoff/Weiss Private view Wednesday 13th March 2013