Sculpted heads with bars passing through them lie scattered around a darkened space in the Fondaco Marcello in Venice. It’s as if the sculpture itself has fallen apart or maybe hasn’t been put together. When speaking to Chan he tells me that it would stand 10 metres high and that’s how it was assembled and displayed in Shanghai, but it’s been arranged in this dissembled form by the artist and curator James Puttnam to reflect on the fact it feels more symbolic of the difficult times we’ve been through with the pandemic. Broken, yet still beautiful.

This sense of things not feeling quite right definitely reflects how it feels to be in Italy during the Venice Biennale as while the pandemic may be waning, masks are required indoors and Covid passes need to be at the ready. A stark contrast to my home in the UK where masks are now an afterthought for many, and the pandemic is being treated as a thing of the past — here in Italy they are understandably far more cautious.

Chan is arguably better known for his jewellery designs — including his Wallace cut which places multiple face within a gem. Though carving sculpture is how he started out originally creating traditional Chinese symbols such as dragons, phoenixes and lions for temples as a means to connect with the divine. These totems provide the name for this exhibitions as his career has now circled back to creating larger figurative sculpture.

He has had quite the journey as an artist giving up all his possessions and becoming a monk in 2000, before coming back to sculpting using whatever materials he could get his hands on. At one point he was handed some diamond to carve and that’s how jewellery became such a large part of his life. He is keen to stress that while jewellery is much smaller the same concepts of balancing light, shadow and reflections still apply to this gigantic sculpture in Totem.

When I ask him whether he views his jewellery design and sculpting as two separate fields he considers them part of the same journey even if the techniques and considerations are different — while his jewellery is part of his artistic portfolio, he wouldn’t consider all jewellery to be art just as all painting isn’t necessarily art.

Chan elaborates that jewellery art includes lots of considerations such as how it wears on the owner and the value of the stones that have been cut, while in sculpture it’s more about how it fills the space it sits in. Though his interest in material is evident in his large scale sculpture too, as he has used the lightweight and expensive metal titanium alongside the more rust-prone and readily accessible iron.

While my interview is being translated from Cantonese by his studio manager, his passion for this project clearly transcends the language barrier and he comes across as warm and engaging.

When asked whether he would ever return to being a monk his answer is unsurprisingly Zen. He relates how the process of choosing to become a monk loosely translates to ‘leaving home’ and the training is part of ‘returning home’. So while he may no longer be seen as a monk he will always be one and the philosophy and spirituality remains with him always, and helps him deal with the ups and downs of life.

It’s clear that there’s lots of ideas bubbling in his mind as when I ask him what’s next for Wallace Chan he says that he has multiple plans and is not sure which one will be realised next. He refers to each night of sleep and dream as a death and rebirth so he becomes a new man with fresh ideas every day.

The interview has been conducted in the exhibition space, surrounded by his work, and while this work is his latest project it’s clear form his passion and philosophy that he will continue to innovate with materials and that there’s a lot more to come from Wallace Chan.

Wallace Chan: Totem, curated by James Puttnam is on at Fondaco Marcello, Venice until 23 October.

The artist’s studio paid for the writer’s flights and accommodation. 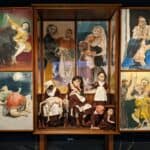 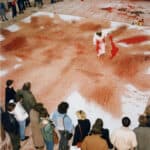