Flora Yukhnovich is acclaimed for paintings in which she adopts the language of Rococo, reimagining the dynamism of works by eighteenth-century artists such as Giovanni Battista Tiepolo, François Boucher, Nicolas Lancret and Jean-Antoine Watteau through a filter of contemporary cultural references including film, food and consumerism.

Variation is a driving force in Yukhnovich’s work with her mark making ranging from delicate flourishes to dramatic and gestural brushstrokes, heightening the rhythmic sensuality that plays throughout her ambitious compositions. Existing in a constantly fluctuating state between abstraction and figuration, Yukhnovich’s paintings explore ideas surrounding dualities and multiplicities, transcending painterly traditions while fusing high art with popular culture, and intellect with intuition.

Yukhnovich has long been entranced by the idea of the fête galante – a type of painting depicting the wealthy at amorous play in parkland settings that came to prominence with Watteau. When viewed from afar, her works might be seen to be figurative, their suggestive brushwork carrying echoes of elaborate eighteenth-century scenes. Yet when approached more closely, the precisely arranged structure gives way to pure texture and colour.

The artist has described her process as ‘searching for a language which sits between figuration and abstraction. I like the idea of combining these two art historical moments which have become highly gendered: the pretty Rococo imagery and the machismo of abstraction. But really abstraction and figuration don’t feel separate to me. They are two different points in the same process, part of a spectrum which ranges from very loose, abstracted marks through to tightly articulated figuration. I do want the resulting paintings to remain open and ambiguous despite their figuration. The viewer has to fill in the looser areas in their mind and I hope that leads to a multiplicity of different readings.’

Over the past two years a shift in emphasis from predominantly French to Italian influences has, for the artist, resulted in a number of developments and breakthroughs. Yukhnovich was one of the first artists to undertake a residency with the gallery in Venice and, during a two-month stay in 2019, used the opportunity to engage more fully with Venetian culture, studying first hand works by Tiepolo including ceiling frescoes in the Ca’ Rezzonico museum and the Chiesa Santa Maria della Visitazione. Tiepolo’s ceiling paintings, in particular, encouraged a more heavenwards focus, bringing with it a change in palette towards celestial blues and pinks and compositions that defy a gravitational pull. Brush marks, freed from describing flesh, become looser, lighter, functioning as directional cues to the viewer.

Victoria Miro said, ‘Flora is one of the most exciting painters of her generation. Her dynamic approach results in work that references art history while being fresh and relevant today. Her 2019 residency with the gallery in Venice studying painters such as Giovanni Battista Tiepolo produced an exceptional body of work which we exhibited last year. I am very much looking forward to working together.’

Born in 1990, Flora Yukhnovich completed her MA at the City & Guilds of London Art School in 2017. She had her first solo exhibition at Brocket, London, in December 2017 and has recently exhibited at Parafin, London, GASK, the Gallery of the Central Bohemian Region, Czech Republic, the Jerwood Gallery Hastings and at Blenheim Walk Gallery, Leeds Arts University, UK. Previous solo exhibitions with Victoria Miro include The Venice Paintings and Barcarole, both held in 2020. Collections include Government Art Collection and David Roberts Art Collection. In 2018 she completed The Great Women Artists Residency at Palazzo Monti, Brescia. 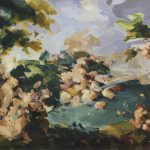