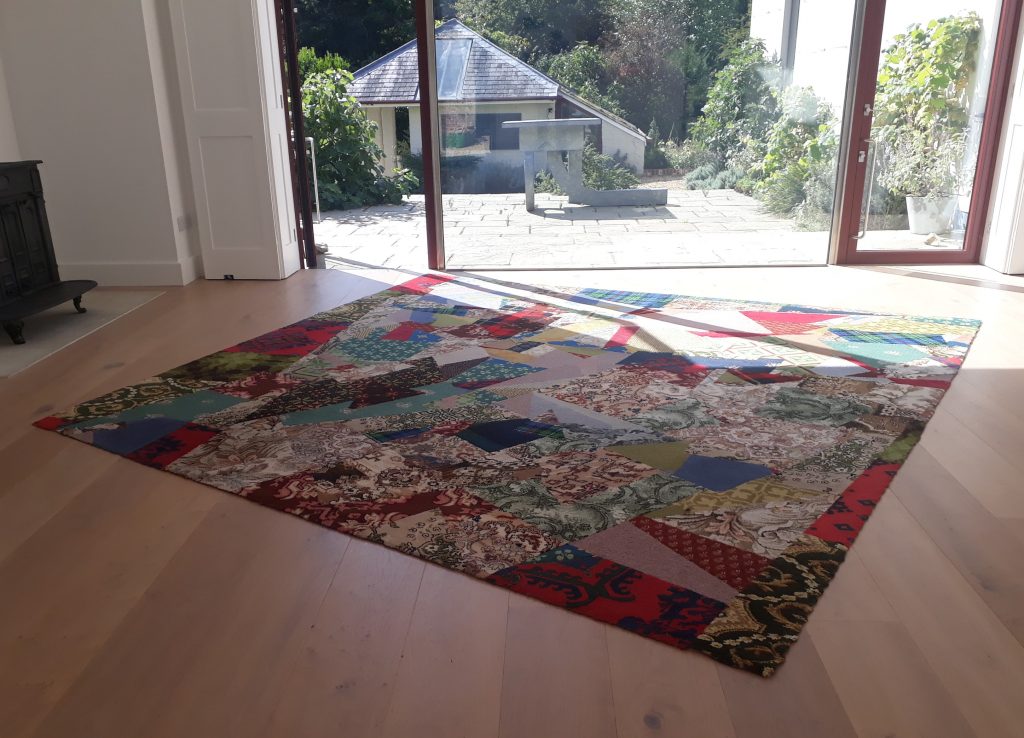 The New Art Centre in Wiltshire combines the ideal socially distanced art experience – sculpture in the landscape – with three indoor galleries. The biggest of those (to 10 Jan 2021) currently surveys the last four decades of Jacqueline Poncelet’s near-50 year art career. She began in ceramics in the 70’s before branching out in many directions – often using complex patterning and modulated repetition, including her exceptional 2012 commission, ‘Wrapper’, for the District and Circle line Edgware Road underground station. She seems to have turned pretty much every utilitarian item from the home into art: pots, shirts, carpets, wallpaper and blankets all feature, as well as paintings and sculptures. Here are four:

This was borrowed from Poncelet’s house: it’s in a house again now, but as an artwork, not as a carpet. Tartan is made up from offcuts straight from the shops. Poncelet sent a friend out to get them, so she couldn’t censor the choices through her taste, and got a truer reflection of society’s tastes. She then used them all, just cutting and arranging them in a multiple combination which is ‘how I experience life – as lots of things at once. My home is full of stuff too and I think ‘it’s all right! – I don’t need minimalism.’ 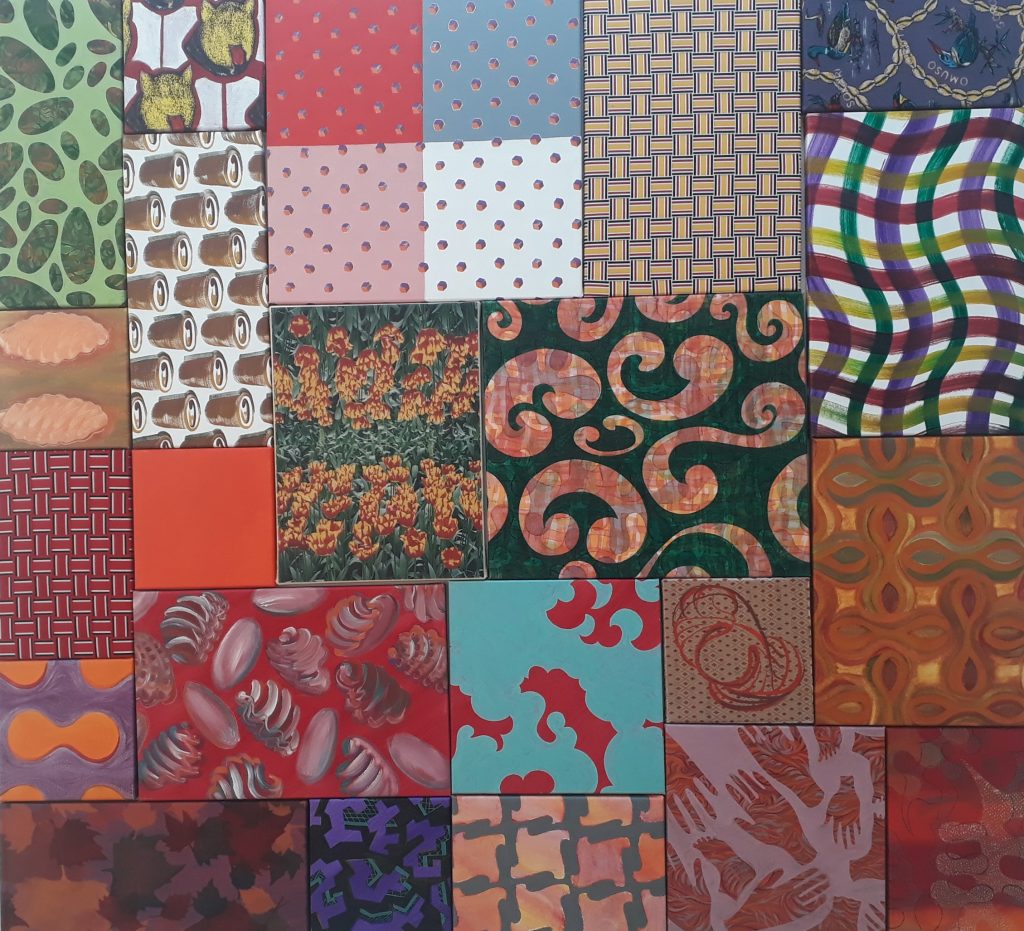 At this time Poncelet was making small paintings, weavings and found tapestry extracts with the aim of combining them without hierarchy. ‘It would have been too easy to call it 22’, she says, setting up the game of what the odd one out might be: the photograph? The monochrome? ‘It represents how we move through the world’, says Poncelet, ‘We might go from A to B via a brick wall, a front garden, an orange front door, a broken paving stone and twelve cars – we don’t think about that, but we do experience it.’ 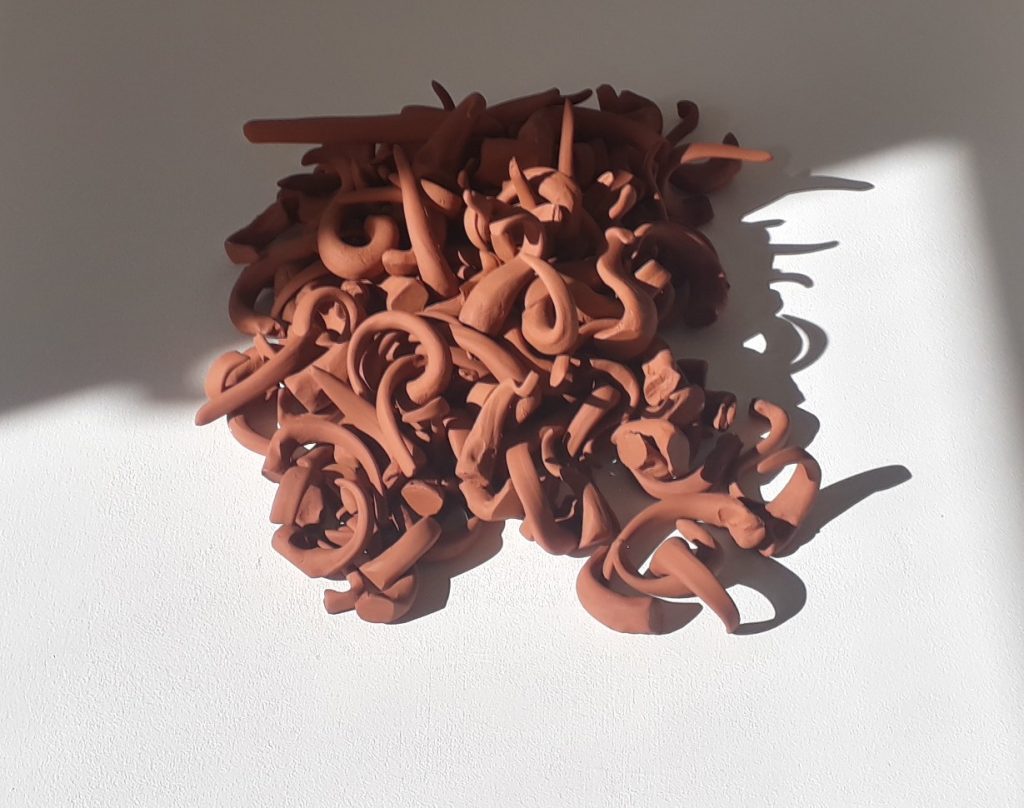 Poncelet didn’t want the title to give it away, but says ‘My studio in Wales is by the river, and I have become obsessed by how we can represent water –  of course this is not like water, but it has that restlessness.’ It’s actually a heap of the forms used to shape the handles of mugs. 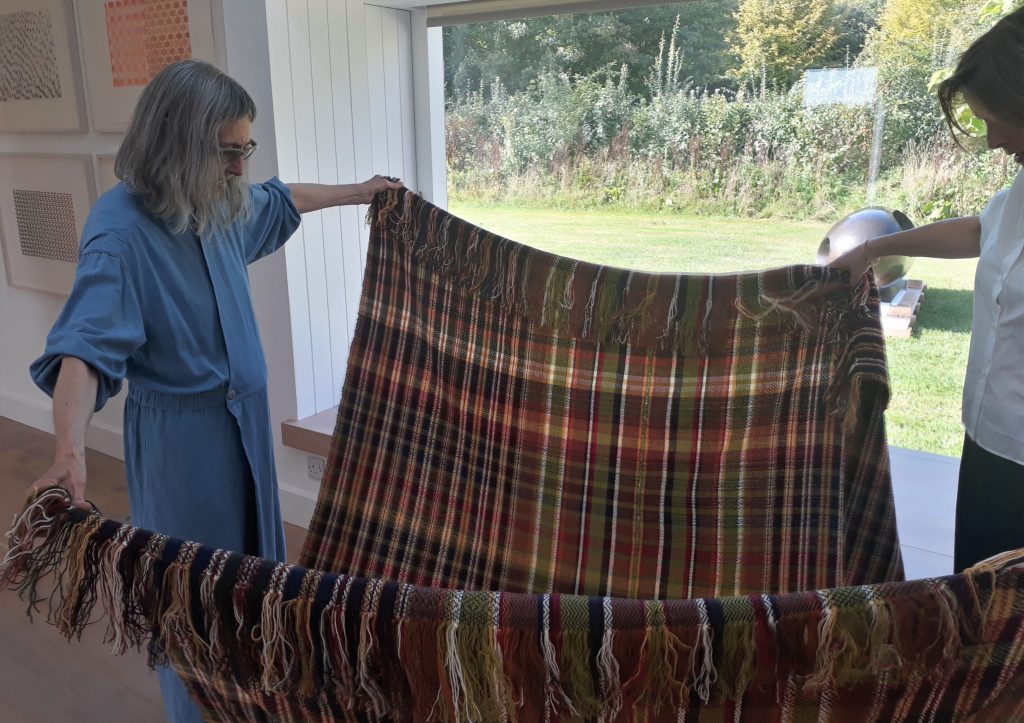 During lockdown, Poncelet has been making  hand-woven narrow-loom woollen blankets, a now-redundant Welsh tradition which, like much of her work, puts art into craft.  ‘I’d meant to do some weaving for a long time, but when I saw the Anni Albers show at Tate Modern, I thought: I’m old, I’d better hurry up!’, says Poncelet. Now  ‘I love lying in bed in the morning and looking at my landscape of blankets.’