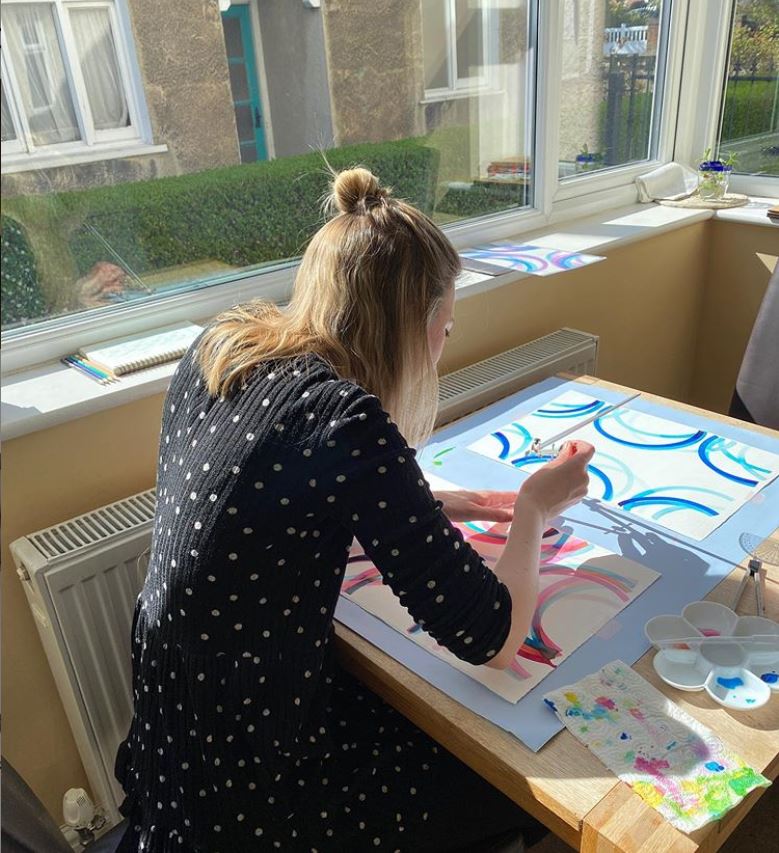 The scheme initiated by Sussex-based painter Matthew Burrows has proved a roaring success: over 70,000 works have been posted for sale via Instagram at #artistsupportpledge, and business has been brisk, with some £15m of sales generated to date. Works are offered for up to £200, and when an artist sells £1,000-worth they pledge to spend £200 supporting another artist. I gave myself a budget of that same £1,000 as a way to support artists whose works I like, and in several cases the covid-appropriate charitable causes towards which they in turn are donating some of their receipts. The set also acts a commemoration of these strange and alarming times. 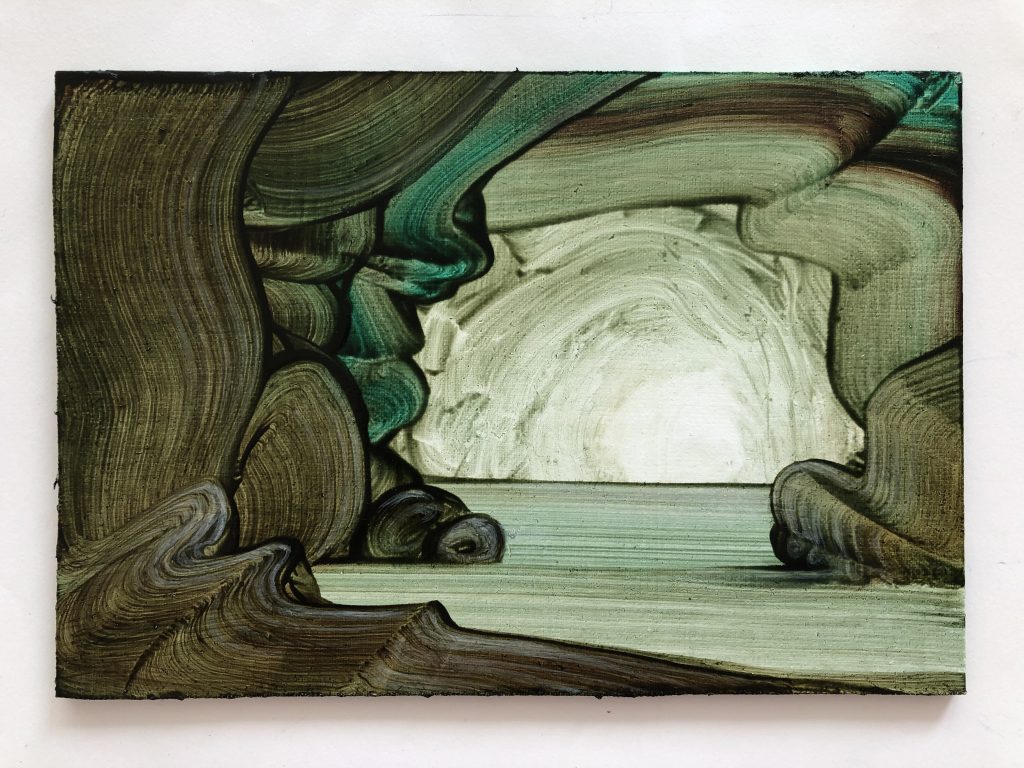 The ultimate isolation space, perhaps, but not necessarily the healthiest: I guess it’s rather damp down there among the mosses, ferns and liverworts which seem to have tinged the space beyond the entrance area in which they normally thrive. We are all, you might say, in our mental caves just now, and maybe there’s a sickly green aspect to many of them. 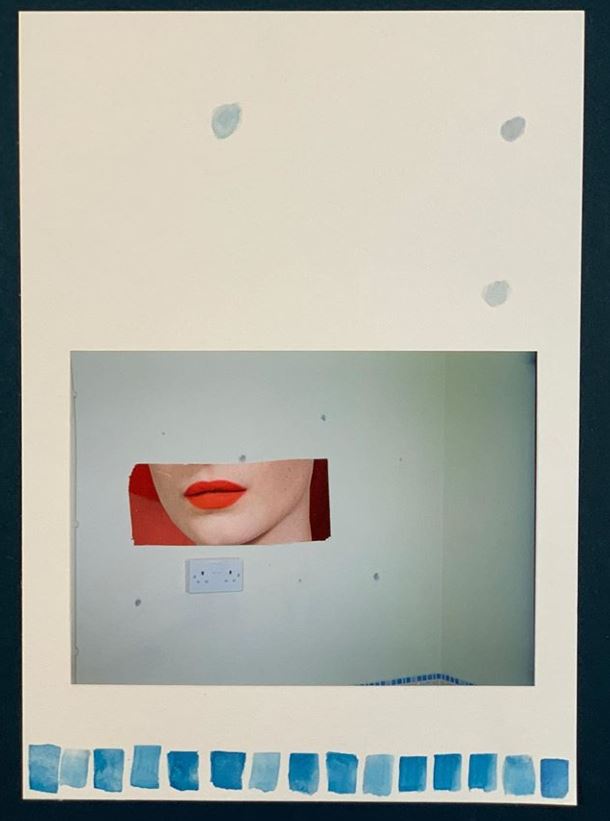 Another cooped-up artist, judged by this collage with photo and watercolour, is Sarah Roberts. As is her way, she provides accompanying words:  ‘She stared at the tiny blue blemishes until they became UFO’s. Blue dots in front of her eyes, swimming – as the walls closed into a crisp sheet of A4. She breathed her daily breaths through a painted lip, recognising the notable importance of keeping up appearances’. So a photo of a wall on a wall of A4 which mimics it leaves the protagonist’s inner wall just about in place… 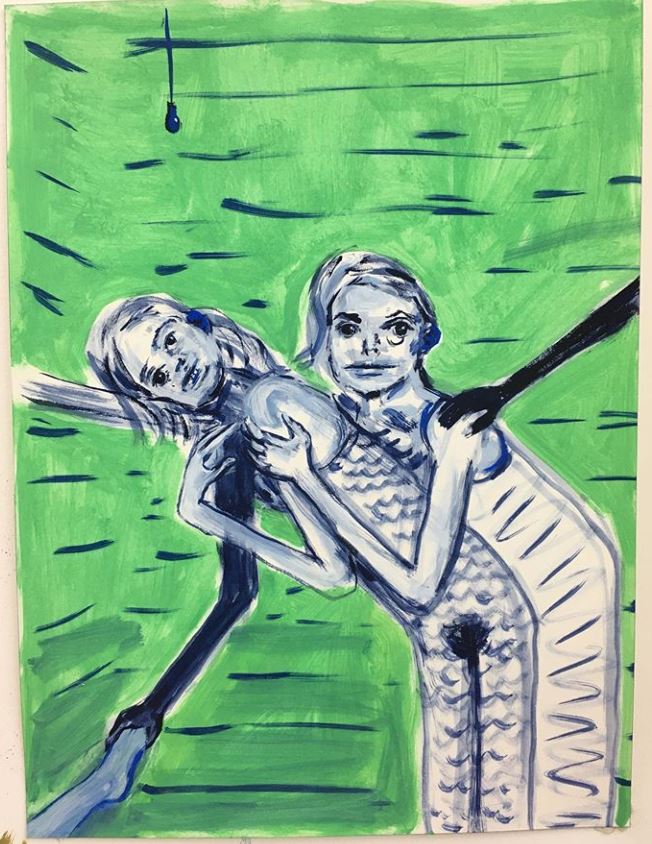 This antithesis of social distancing features, when you take a second glance, five people in a fairly small space, lit eerily green by a single bulb. What’s going on? And why is the frontal figure wearing a see-through fish scale costume? A satisfyingly puzzling example of Helyer’s way of infecting classical and mannerist inspirations with a somewhat surreal twist, open to interpretation as emotional states. 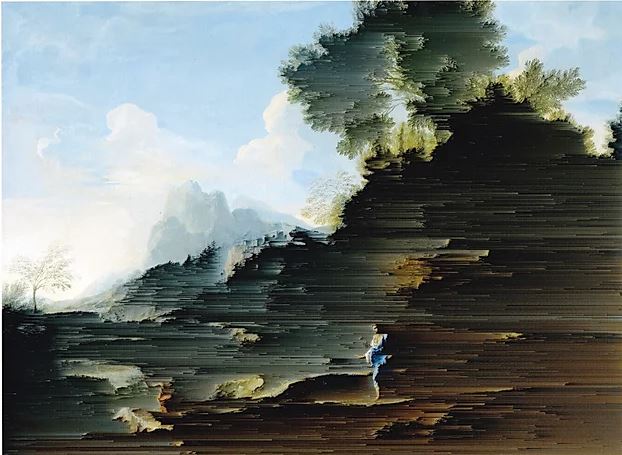 Gordon Cheung’s paintings on  a collaged backdrop of stock listings link to an interest in the way we move between the physical world and the virtual realities of communications technology, global finance and the Internet – and on to another strand of his practice, which disrupts the data files of various image sources. Here Cheung’s algorithm reorders the photo pixels in Gaspard Dughet’s Italian Landscape, 1638-40 (original at bottom), which features figures at the currently approved two metres from each other. 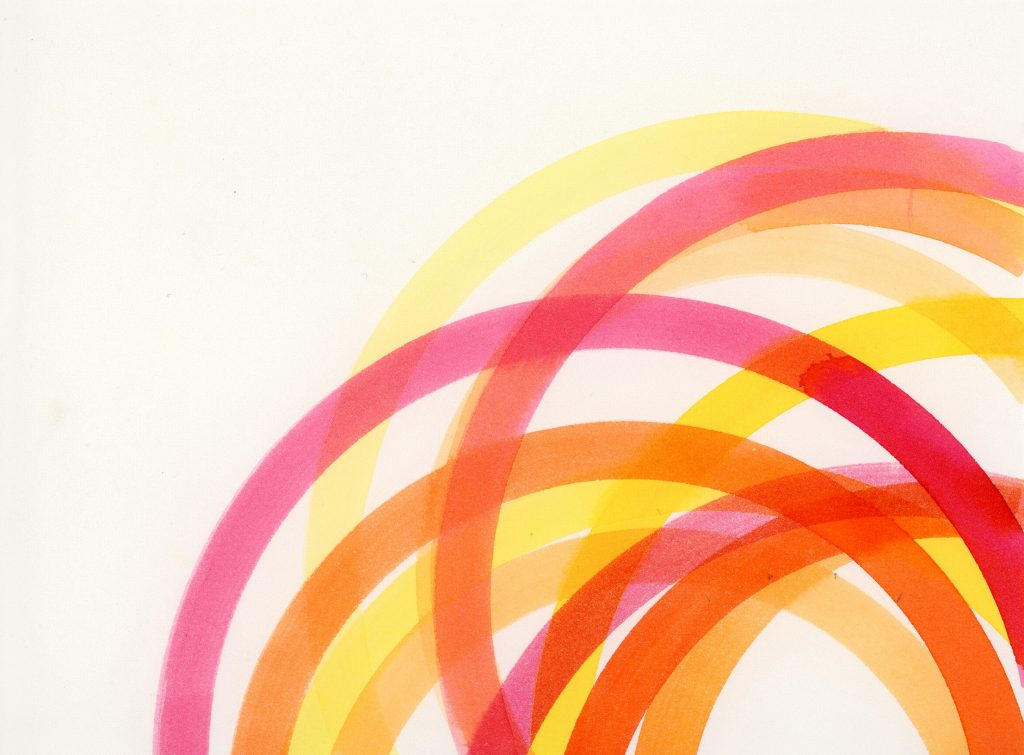 Fiona Grady’s work is at its most characteristic when installed on windows, where the light floods through her colourful vinyl geometries to intoxicating effect. So there’s a sense in this lockdown production (as per image at top) of the artist stuck inside. Her motif in a seductive new series of ink drawings is upbeat, it’s true, but let’s not get carried away: these are only  partial rainbows, and feature only some of their usual colours. 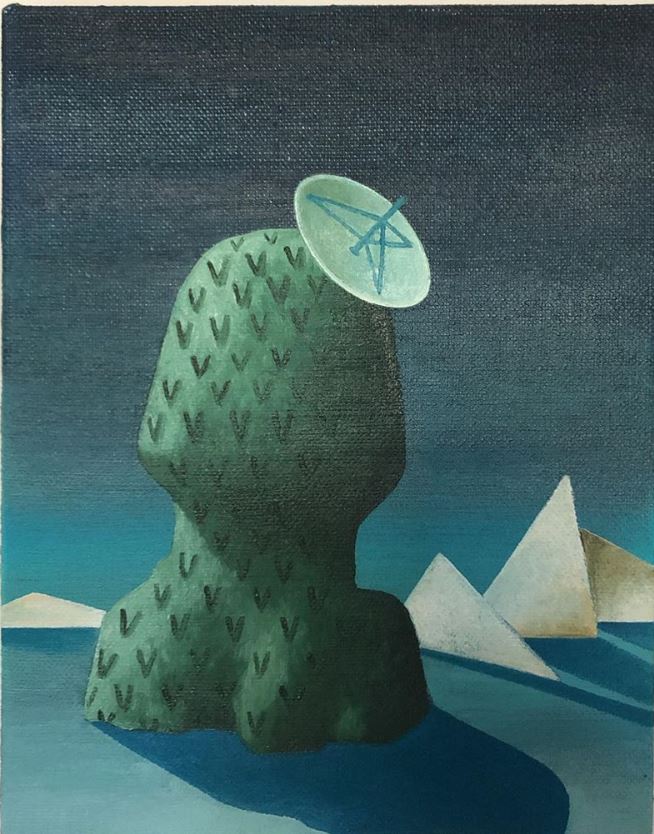 This intimately-scaled oil has a paradoxically monumental presence and is rich with suggestion. A rocket form with hints of cactus, phallus and portrait head plays the sphinx role in a landscape of pyramids. Is it, perhaps, a retro-styled vision from the future beaming back a message of hope to our troubled times? 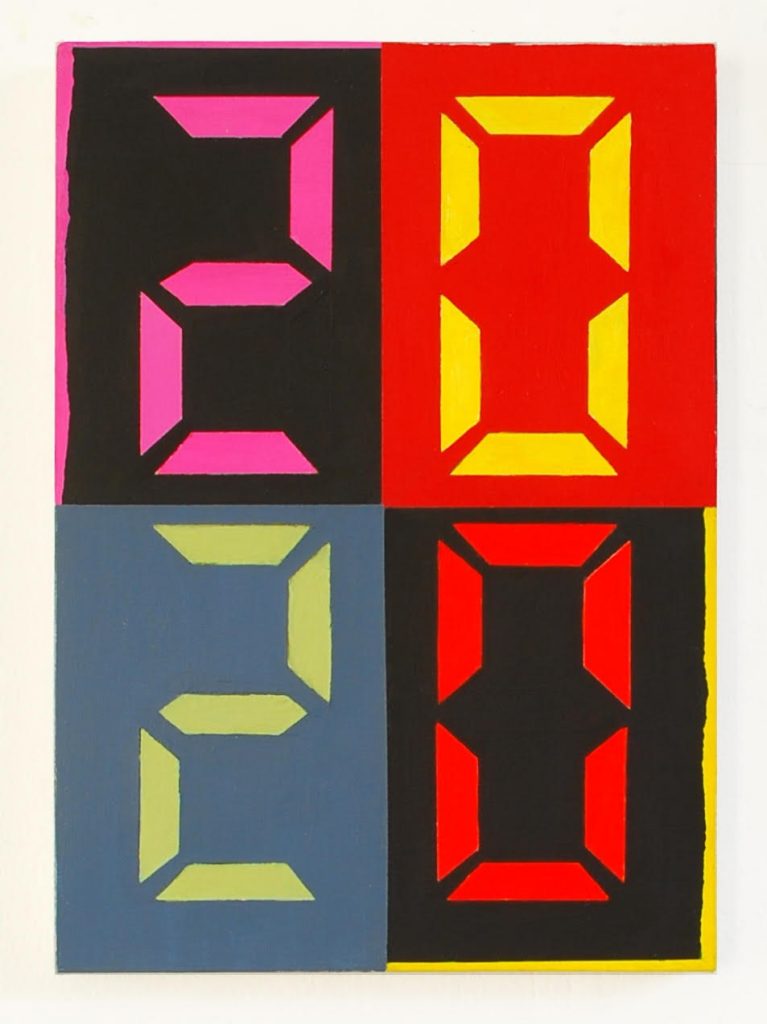 This is from a series of small oils on canvas in which the languages of geometric abstraction and colour combination nod to Japanese greats On Kawara and Tatsuo Miyajima. The idea of a painting standing in for the electronic sequencing of a digital clock or calendar is inherently absurd, but by freezing time so literally, ‘2020 #3’ will come to act as a memorial to the corona year. 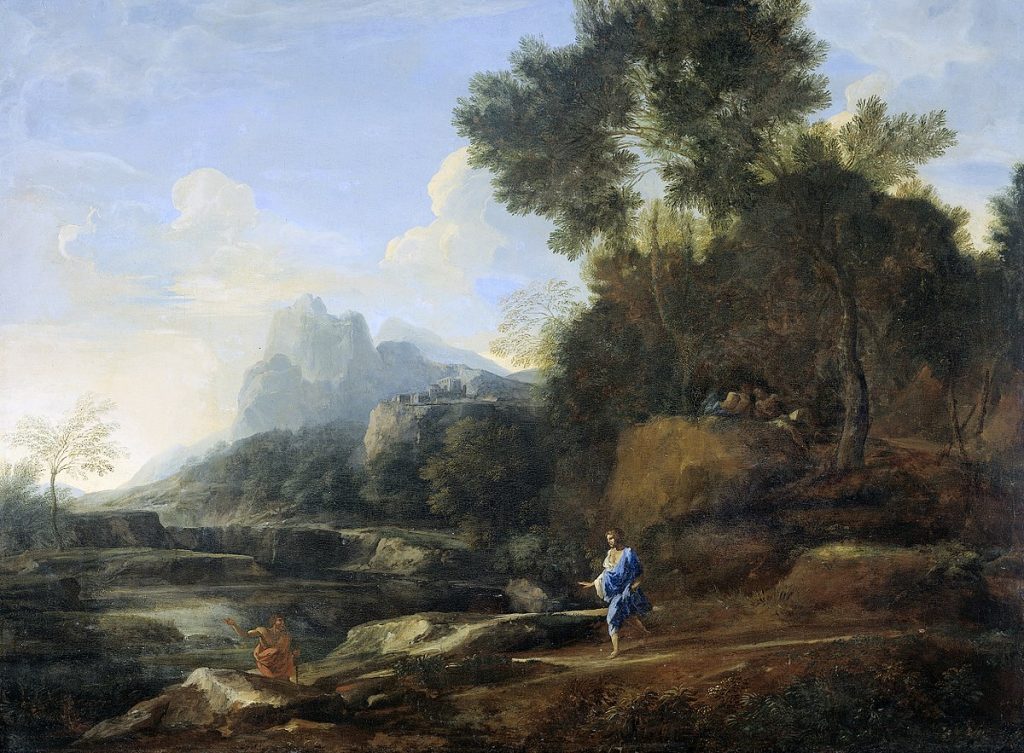 The Top 5 Art initiatives during lockdown