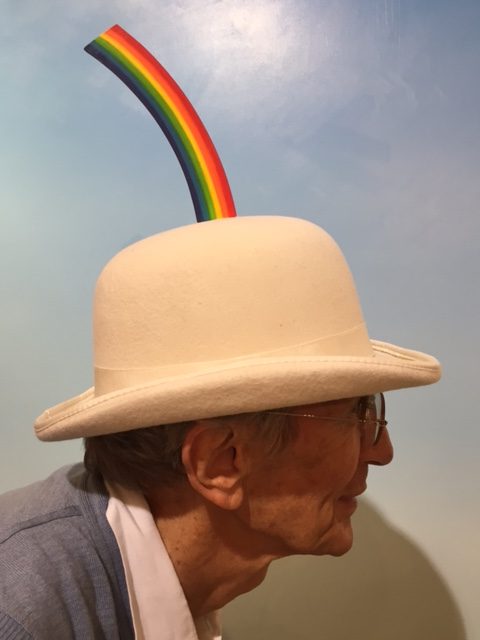 Patrick Hughes was dapper, wearing a three-piece blue suit, as he led us through the history of his work. He eloquently reflected on the progression, and residing themes, of his creative career: from his epiphany at a train station in the 1960s to his whimsical rainbow ‘f*** you’ to Mondrian. 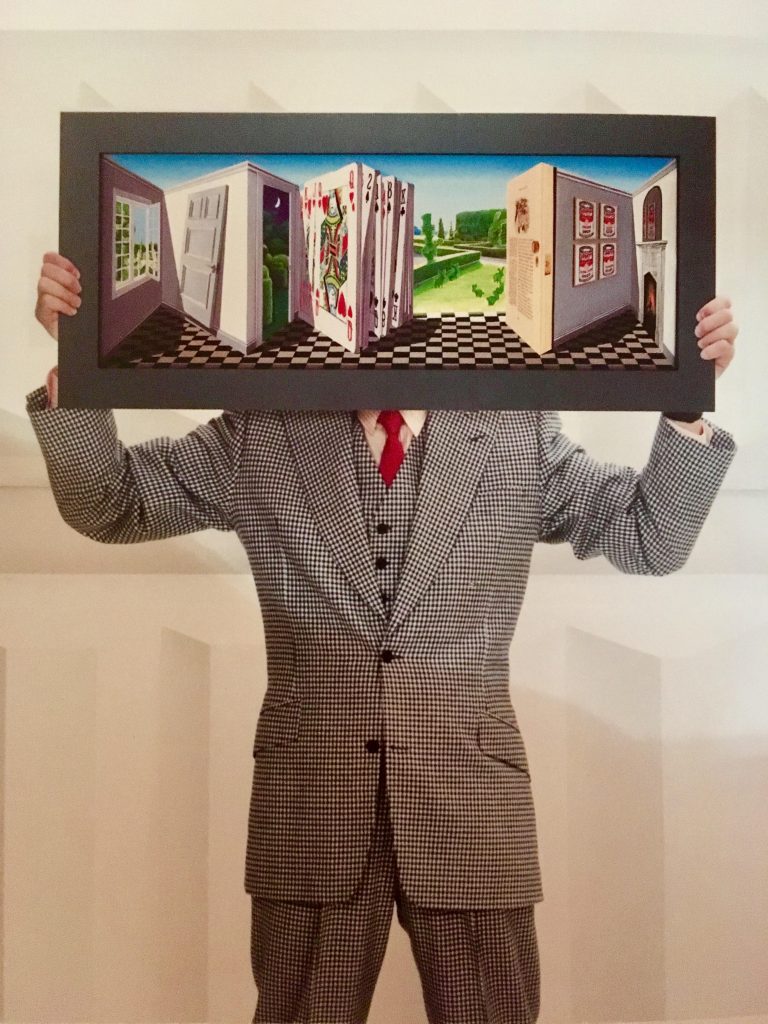 A retrospective of a living artist is always a surreal experience. One’s sense of time is put into a new perspective by seeing the artist living and breathing before their work. Indeed, the experience creates an allusion. One almost sees double: on the wall, one sees what the artist was and hoped to achieve, and beside it, we see what they have become. 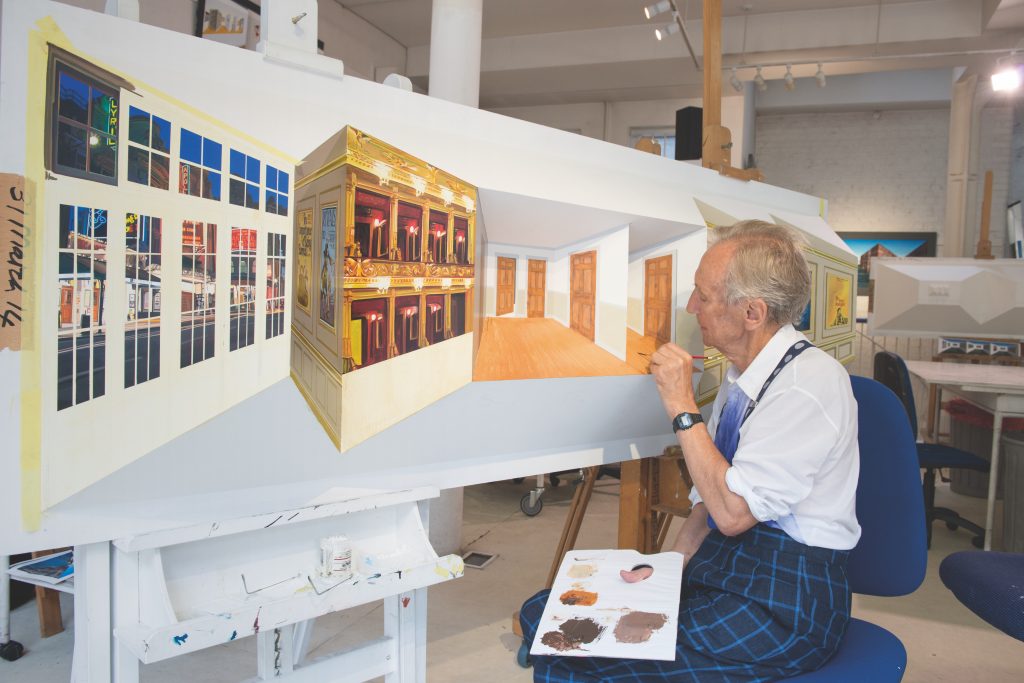 What Patrick Hughes’ has become is visible in his whimsically titled self-portrait, ‘Facing’. The monochrome self-portrait plays with positive and negative space. Hughes has created an inverted portrait. The three-dimensional cast of his face has been inserted into a black box like an intaglio carved in stone. The forms created by the hollows and creases of his eyes, mouth, nose and hair, have been painted by Hughes to give the imprint a photographic quality. Both the artist’s face and hand have modelled this image, capturing the exact contours of his face at a precise moment, like a black and white photograph. ‘Facing’ is simultaneously a painting, photograph and sculpture. 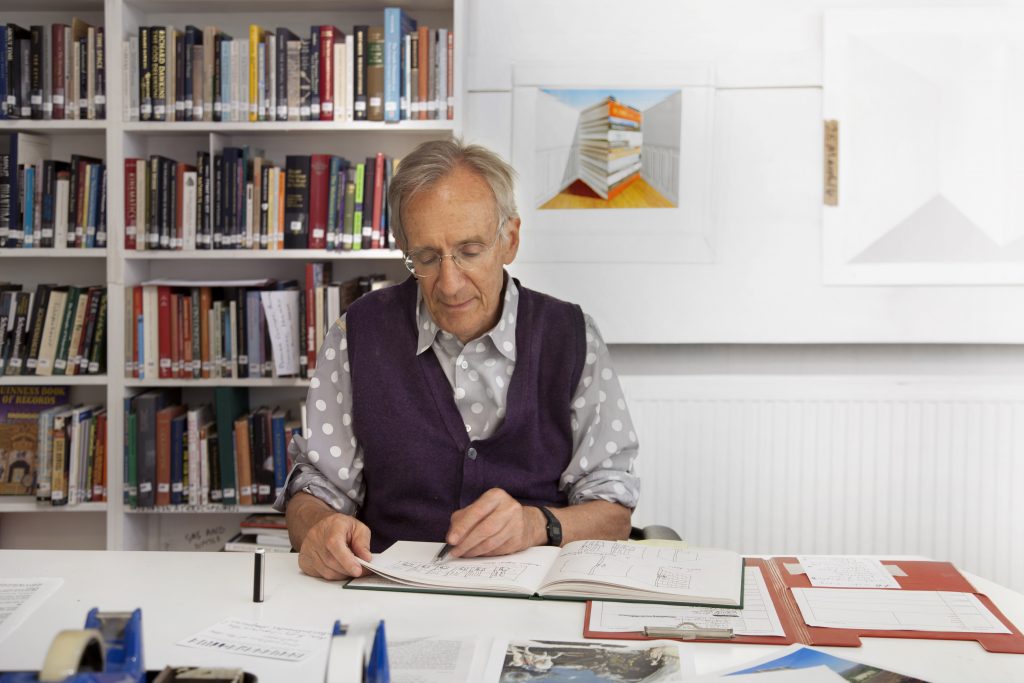 One has to walk through Hughes pictures. Patrick Hughes’ work stretches across time and genres, containing references to the art historical cannon and contemporary mass culture. “My paintings go beyond language and cultures. I get a vivid response from people all over the world”. Hughes’ signature is to play with our expectations of space. In several paintings, such as ‘The Pleasure of Escher’ or ‘Women and War’, he has built onto the canvas, extending the surface from the flat 2D surface into a 3D sculpture painting.

Coupled with the unexpected distortion of surfaces the realism of Hughes painting style creates a sur-reality. Elements of Giorgio Di Chirico’s shadow strewn streets are visible in Hughes Venetian series such as ‘Out and In’ or ‘Riflessi Sulla Laguna’. However, unlike Di Chirico’s mysterious arches that lead who-knows-where, Hughes emphasizes positive space. He plays with right angled corners, painting architectural angles that protrude out of the picture plane. 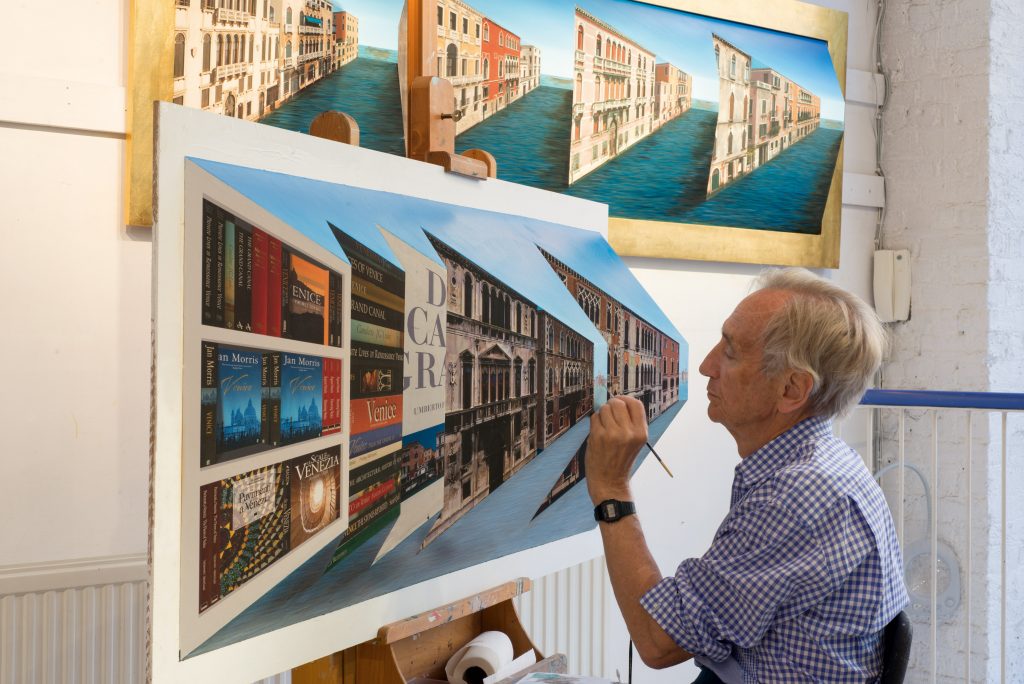 Hughes uses acrylic paint to capture a vivid almost cartoonish light in his street views from rough brick walls to the stuccoed facades in his Venice series. Venice is a marvellous subject through which he plays with perspective, and our perception of space, as it is a cityscape of reflections. This pictures beg the question, ‘What is real?”. This is a potent question to pose in an age of ‘fake news’ and cyber reality.

The presence of the artist at their retrospective gives the viewer a new perspective on what they see, that of the artist’s voice. With this show, Patrick Hughes enjoys the privilege of guiding viewers through his work, revealing the internal thoughts and moments of external inspiration that led to the work we see today.