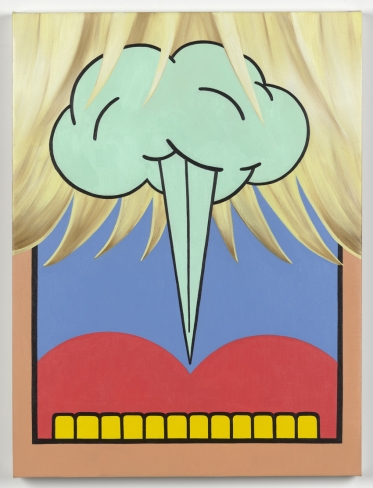 Dark Laughter, an exhibition curated by Barry Schwabsky running from 25 October to 23 November 2019. Four New York-based artists, Genesis Belanger, Ellen Berkenblit, June Leaf and Emily Mae Smith each use imagery that might at first seem to have a reassuring familiarity, but they view it with skeptical eyes and from off-center viewpoints, endowing it with an exorbitant representational energy to assert a rueful, sometimes sardonic attitude toward the strange world in which we seem to be stranded. Their work arouses dark laughter thanks to their acerbic view of the world we share, and against which they quietly rebel.

The four artists represent three distinct generations. June Leaf (b. 1929)—part of the original Chicago “Monster Roster” along with Leon Golub, Nancy Spero, H.C. Westermann, and others—is one of the unheralded visionaries of contemporary painting and sculpture. Her work reveals the tragic aspirations and rational follies of existence. Like that of Belanger, Berkenblit, and Smith, it provokes a dark laughter. In “Dark Laughter” she is represented by painting, sculpture, and drawing. Her canvas The Painters, ca. 1975-80, presents its protagonists as a pair of mounted Don Quixotes doing battle with their brushes. 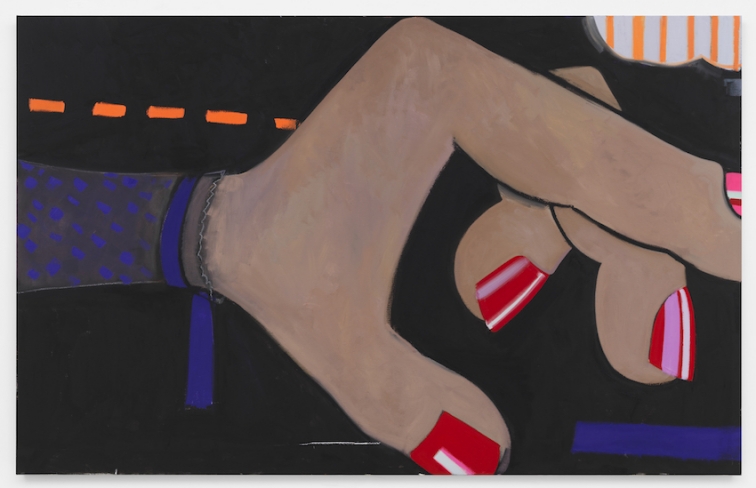 Ellen Berkenblit (b. 1958) places her recurrent snub-nosed pictorial alter ego in an off-balance
kaleidoscopically-shifting world of abstract shapes, domestic and wild beasts, and all the familiar trappings of daily life—with the exception of other people; her world is all for herself, even when it’s not quite as she’d want it. Her paintings in “Dark Laughter” expose her wry view of the body and its adornment; the simple act of applying makeup becomes a strange sort of art form when, as in her Circus of Books, 2019, a red lipstick makes for blue lips. 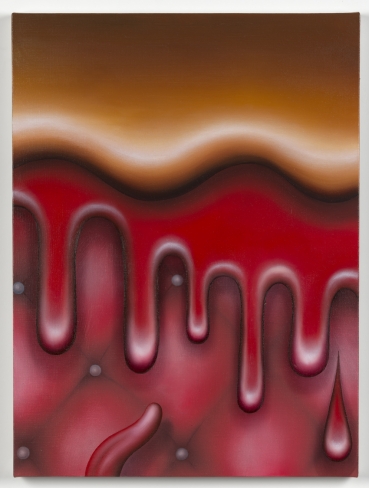 Emily Mae Smith (b. 1979) also uses a recurrent avatar in her stylistically diverse paintings: a broom, not unlike the one that rebelled against Mickey Mouse in Walt Disney’s Fantasia: “this very lowly thing that became very powerful when someone tried to control it,” as Smith says: a feminist revolt. Her works for this show are particularly topical, using framing devices of cartoonish hair, mouth, and buttocks to create satirical portraits of contemporary political figures and the buffoonery of their rhetoric. 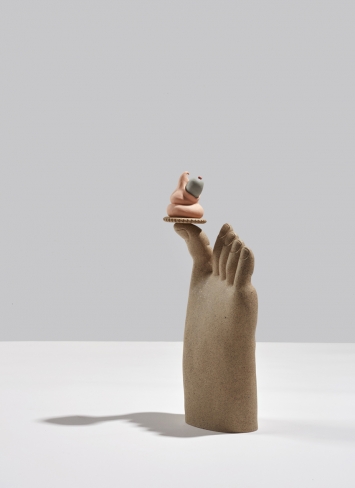 The ceramic or concrete sculptures of Genesis Belanger (b. 1978) are whimsical remakes of ordinary things that conjure an eerie alternative world in which objects might be alive while the human body has been frozen in scattered parts. Her contributions to “Dark Laughter” include a handbag with a milkshake inside, a foot with a dollop of whip cream and a cherry on the big toe, and a rather alarming electrical outlet with a knife stuck into it.

About the artists
Genesis Belanger (b. 1978) studied at Hunter College, New York and The Art Institute of Chicago. Recent solo exhibitions include New Museum, New York; Perrotin, New York; and François Ghebaly, Los Angeles. She is currently working towards a solo exhibition at The Aldrich Contemporary Art Museum, Ridgefield in 2020.

Barry Schwabsky is a poet as well as art critic for The Nation and co-editor of international reviews for Artforum. He has taught at several institutions, including School of the Art Institute of Chicago; Yale University, the School of Visual Arts and Goldsmiths College, London. Recent publications include The Perpetual Guest: Art in the Unfinished Present (Verso, 2016), Heretics of Language (Black Square Editions, 2018), and Landscape Painting Now (DAP, 2019). His latest book, The Observer Effect, On Contemporary Painting (Sternberg Press), will be launched at Pippy Houldsworth Gallery, London on Thursday 24 October 2019.

Philomena Epps is a writer and editor living in London. Her writing and art criticism has appeared in numerous publications, including art-agenda, Artforum, Flash Art, and Frieze. She is also the founding editor of Orlando, an independent magazine focused on the visual arts and contemporary culture.