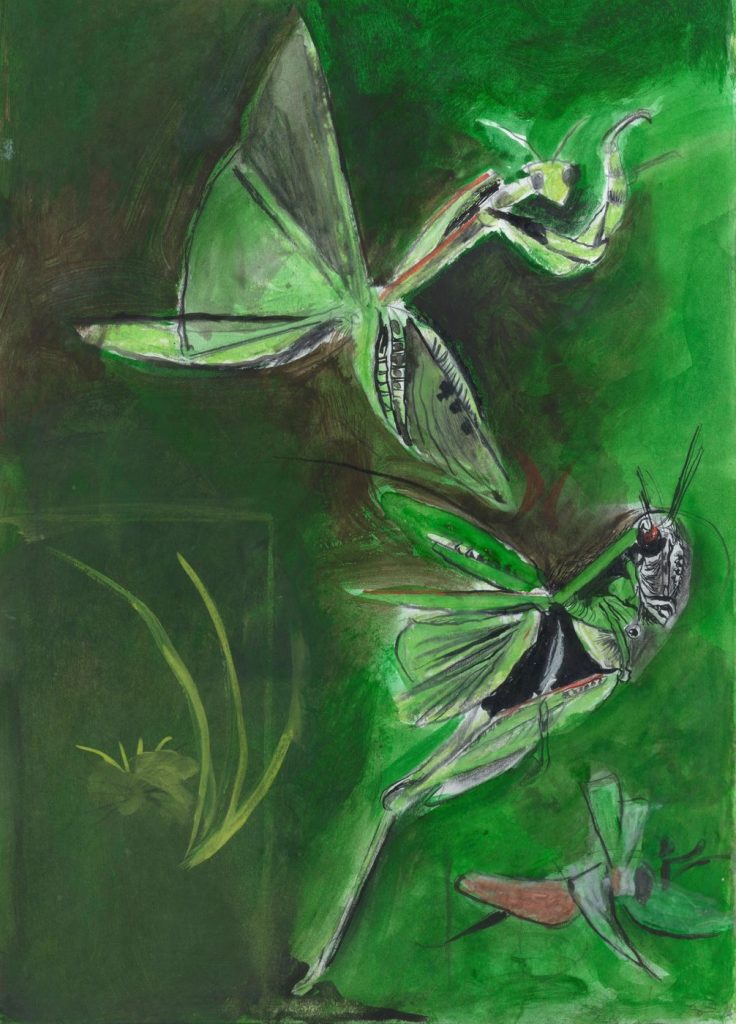 Masterpiece (which runs on to Wed 4th July) prides itself on quality and variety, both in evidence in my selection of lively animals from the 10th edition:

Sutherland is famous for his bees, but grasshoppers – titled in French because he painted them in the south of France – are rarer. Yet the vibrant greens, sense of movement and surreal mantis-like edge to the caelifera make this one of his most characterful works. 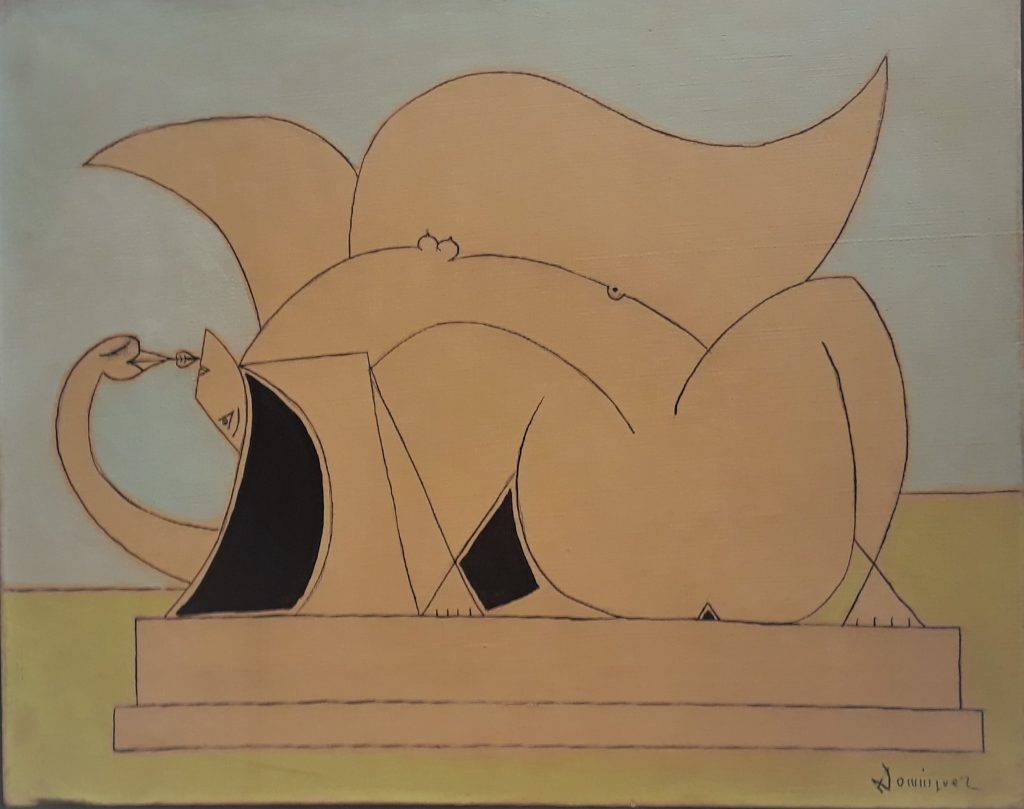 There’s no hiding the influence of Picasso on the Spanish surrealist (1906-57), but this small painting carries a whimsical wit of his own, notably in the swan’s self-satisfied expression. Hard to guess from it that Dominguez suffered from childhood with a degenerative bone disease, and would soon choose to slit his wrists in the bath. 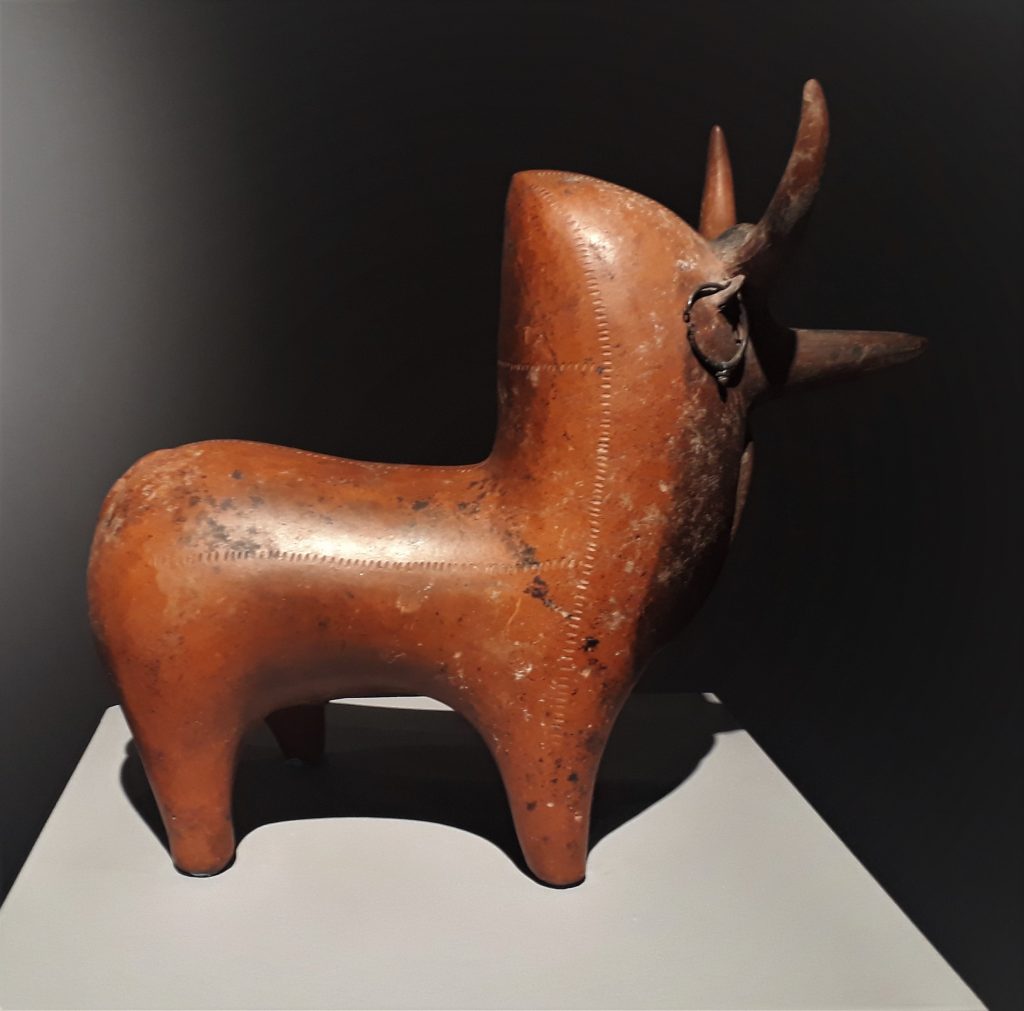 Picasso, in turn, was influenced by surprisingly modern-looking bulls like this. If you pour red wine into the head and drink its spout-out, it’s rather as if the bull was having its throat ceremonially slit. The earrings are a nice touch. A rhyton, of course, is a conical container for storing and consuming fluid, typically formed in the shape of an animal’s head. 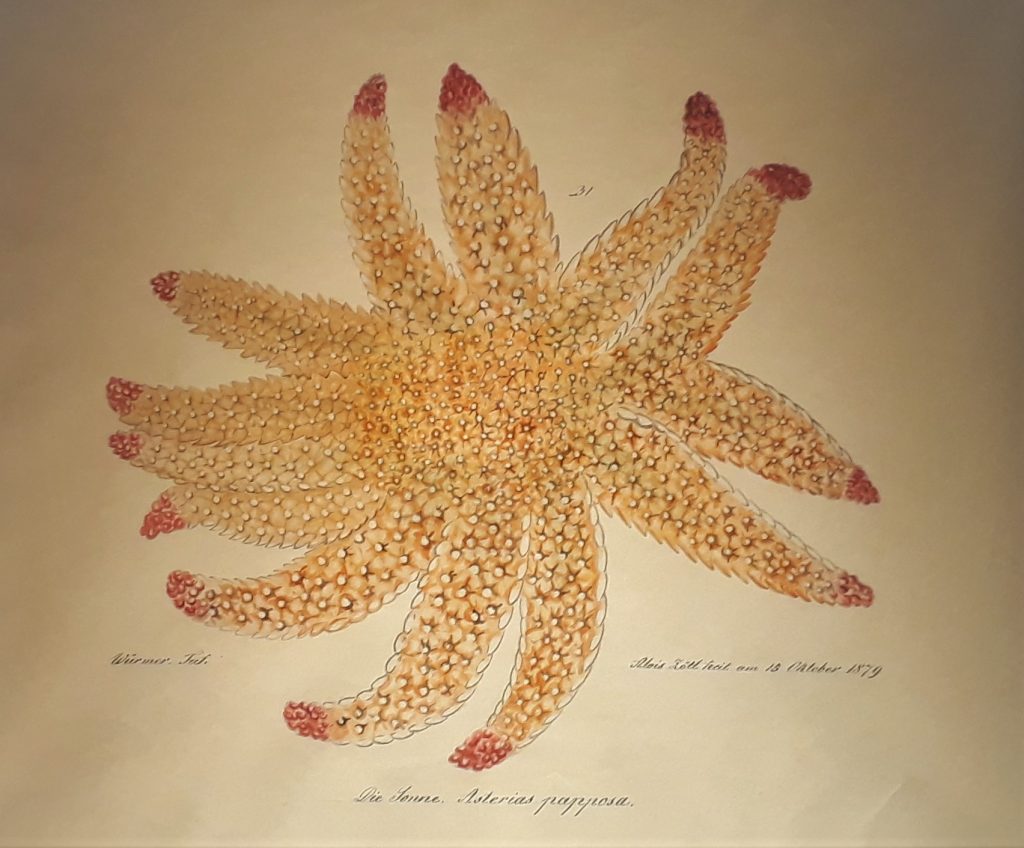 Austrian dyer Aloys Zötl (1803-87) had a sideline in what surrealism’s kick starter André Breton, who spotted a forerunner, called ‘the elaboration of the most sumptuous bestiary ever seen’. The 13 branches in this lively watercolour may look fantastical but in fact the common sunstar does have 8-14 arms. 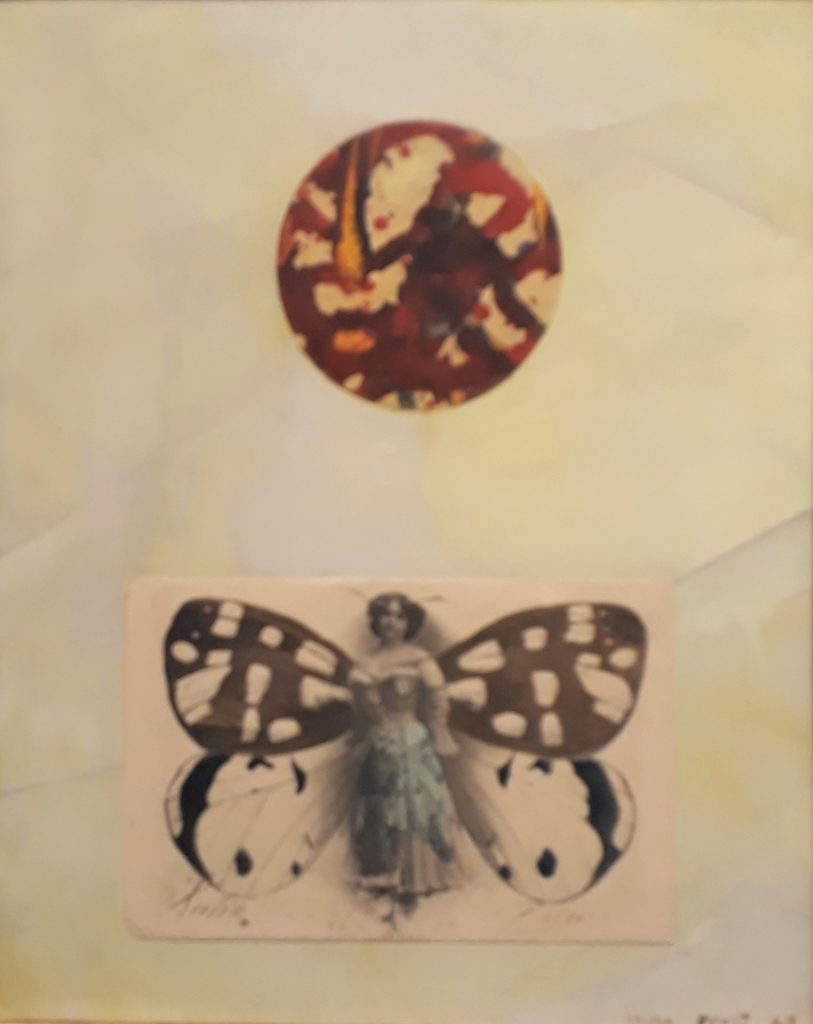 It looks as if Ernst has enhanced the wing colours and collage-dressed an insect-performer who was already eccentric in a found postcard which he has lit up with his own style of sun. I reckon, from the caption’s un-Max-like calligraphy, the butterfly woman had already adopted the kissy nom de plume which Ernst’s title highlights. 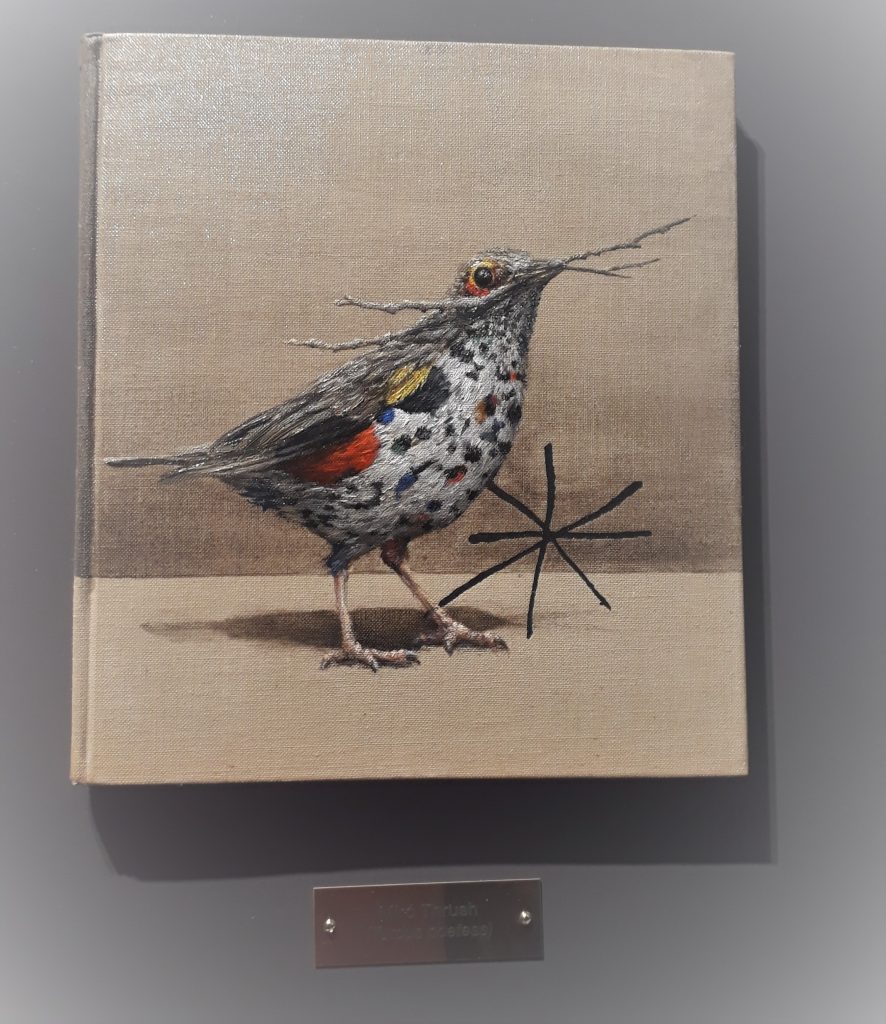 New York based English painter Clive Smith showed several of his many-blooms-on-a-branch floral paintings – a neat twist on the Dutch golden age tradition of the cross-seasonal still life – plus this thrush, painted on a Miro catalogue and featuring his signature colours. Yes, ‘Turdus’ really is a thrush… 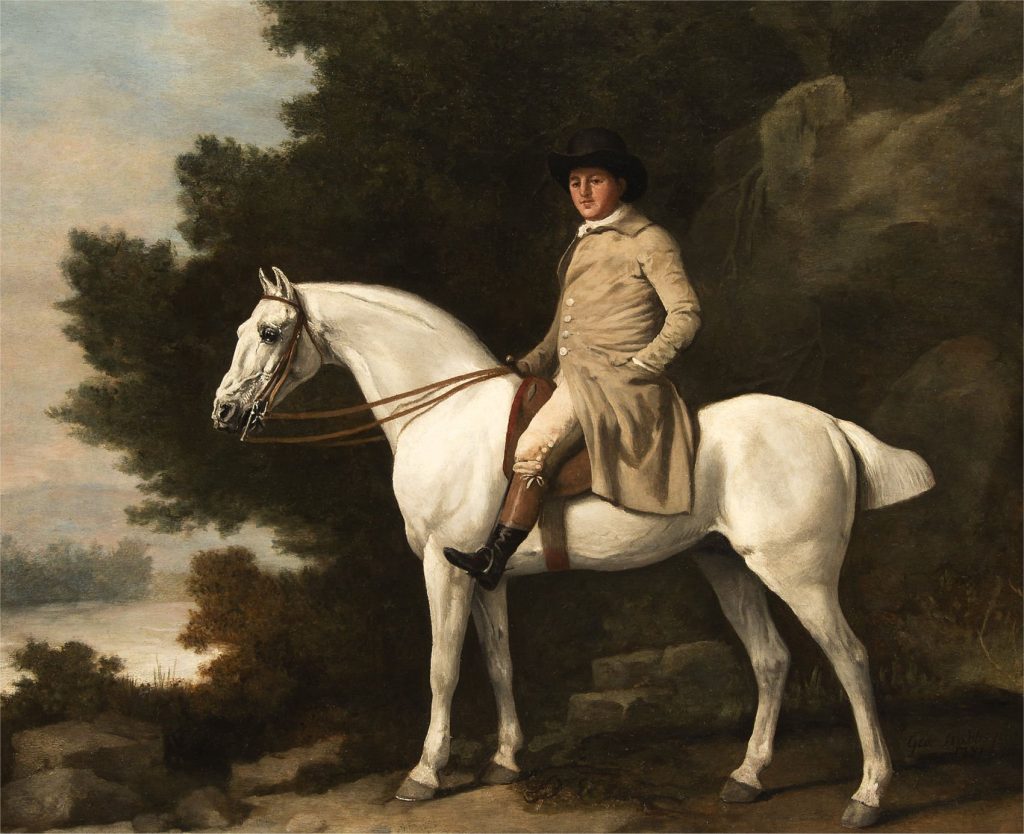 George Stubbs: Portrait of a gentlemen upon a grey hunter, 1781 at Trinity House, US/UK

It’s rare to see such a Stubbs outside a museum. Trinity House sold it ten years ago but recently bought it back, and were offering it for £2.9m. It sounds a lot, but you can pay that for, say, a painting by Adrian Ghenie… There’s speculation that this could be Stubbs’ portrait of his son, George Townly Stubbs.

It looked at first as if this fellow’s upper lip had sprouted a snake, but in fact it is half of a beak. This is a birdman ancestor figure to be worn in the initiation ceremonies through which a boy becomes a man. 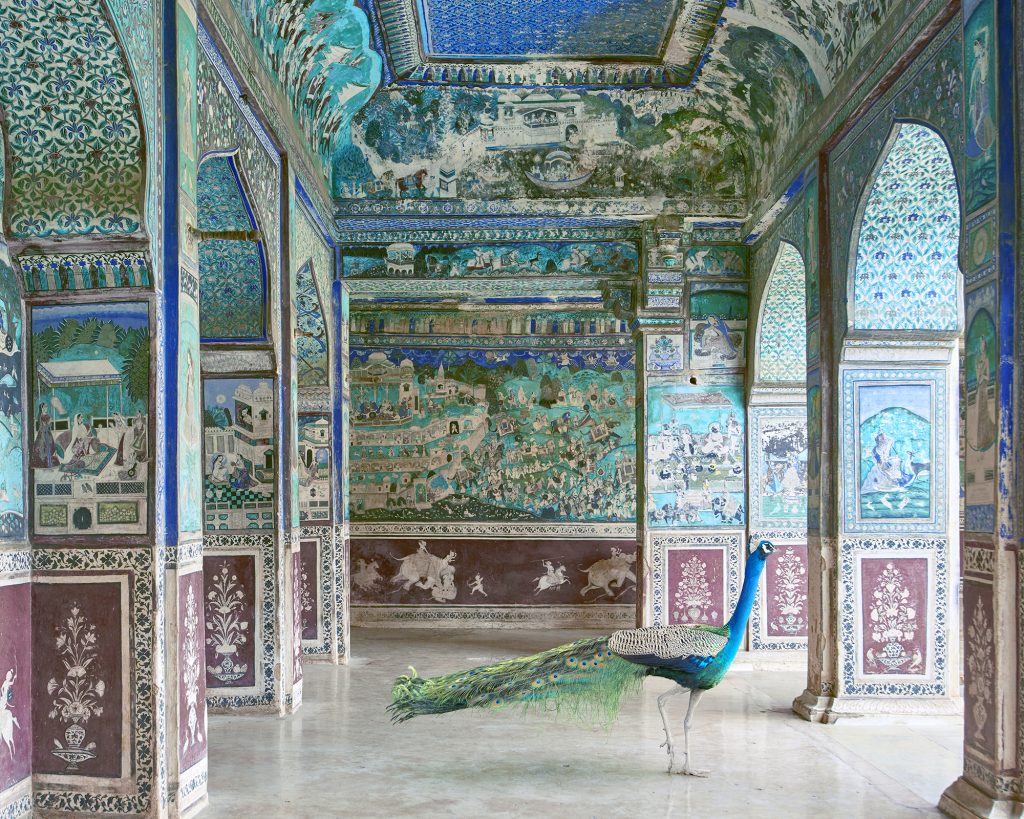 One way of reading Karen Knorr’s striking digital insertions of animals into interiors might be that we’re forcing them into our environments to the extent that soon enough the only animals around will be digital. This is from a series which began with a 2,000 mile road trip to record sacred and secular sites across Northern India with her large format Sinar P3 analogue camera. 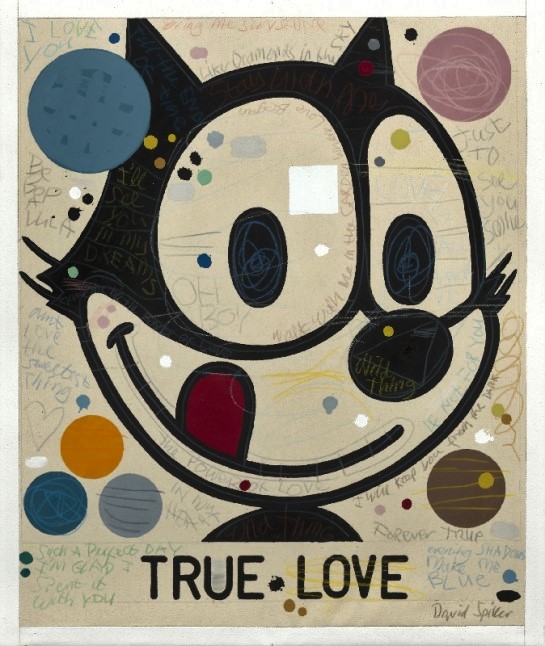 David Spiller died this time last year. A substantial memorial exhibition included this coupling of Felix the Cat – cartoon characters were Spiller’s way of painting instantly recognisable portraits – with Cole Porter’s much-recorded 1956 song. He would leave such canvases around the studio, adding arbitrary spots of colour and snatches of lyrics as the mood took him (the words here include ‘such a perfect day’, ‘wild thing’ and ‘like diamonds in the sky’ – no prizes, but that isn’t The Beatles).