A visit to Elephant West - FAD Magazine
Skip to content 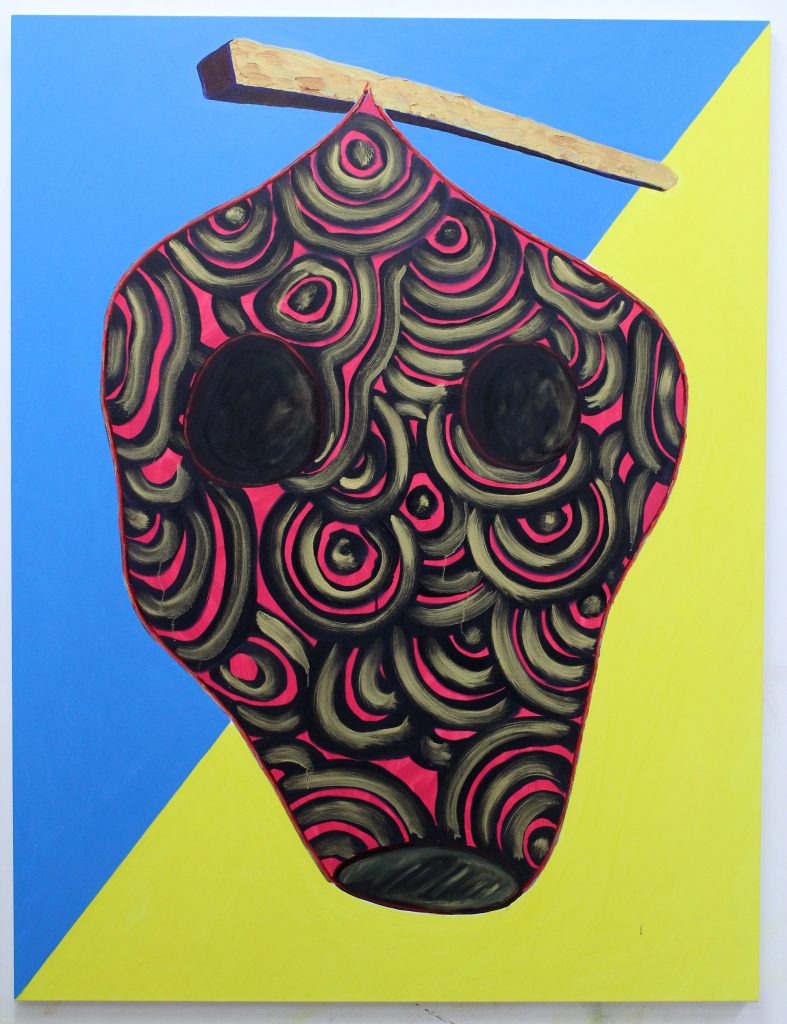 The launch of Elephant West, a big new space in a former garage next to White City tube, and linked to Elephant Magazine, is one of the most welcome recent developments in London’s art scene. There’s an emphasis on events and exploratory projects, rather than conventional exhibitions. Currently, you can see recent paintings by Anna Liber Lewis. 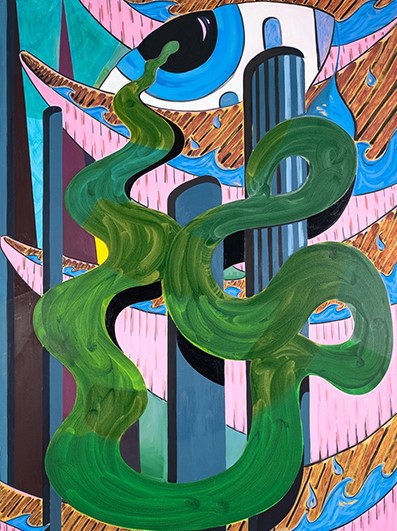 Looking at them reminded me that painting is a simple business: the only decisions of any consequence are what to paint, and how to paint it. But ‘simple’, of course, doesn’t mean ‘easy’. Those decisions, for example, often require a lot of bravery. Liber Lewis has plenty of that: she applied to the RCA after a thirteen-year gap post-BA for museum and community work, teacher training and a child, graduating in 2015. She took on subjects likely to cause a fuss, painting bodily matters – and cocks in particular – from a feminist perspective, and she compared the physical engagement of painting with sex. Her talent was clear enough, and she won the Griffin Prize in 2017, as a result of she was invited to choose a collaborator and funded to spend a year in the studio without distractions. The display emerging from that is extensive: 17 paintings, many 2m high, and a dozen smaller works on paper. Collectively, they demonstrate a desire to move from being attended to primarily for what she paints, to seeking recognition for the way she uses paint. It’s a courageous move, though also one influenced by her chosen collaborator, Four Tet musician Kieran Hebden, whom Liber Lewis has known most of her life. She’s been listening to his music while she paints, and sending her images to him to trigger new music: you can listen to that while you look at the paintings. That’s a pleasant enough way of slowing down your looking to advantage, though I didn’t find that the rhythms of the two forms felt particularly close: Four Tet’s electronica is chirpy but laid back, Liber Lewis’s mark-making is vigorously assertive. That’s not a problem: many artists use music as inspiration, the results of which are unlikely to relate directly. Yet it did incline me to look at the paintings just for themselves. 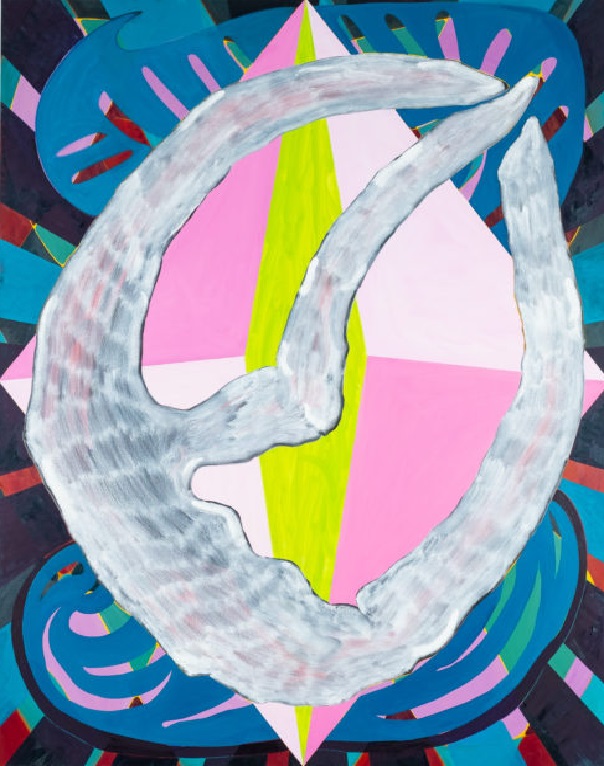 What we find is a shift away from clear shapes given their own space towards a layered approach which ambiguates what we see – an effect enhanced by a move towards more abstracted forms, less clearly delineated colour fields, and more mixed colours. They don’t come across as wholly abstract: many feature eyes as a motif, for example, and many – they’re all in portrait format – read naturally enough as faces. Yet they do foreground their abstract means. 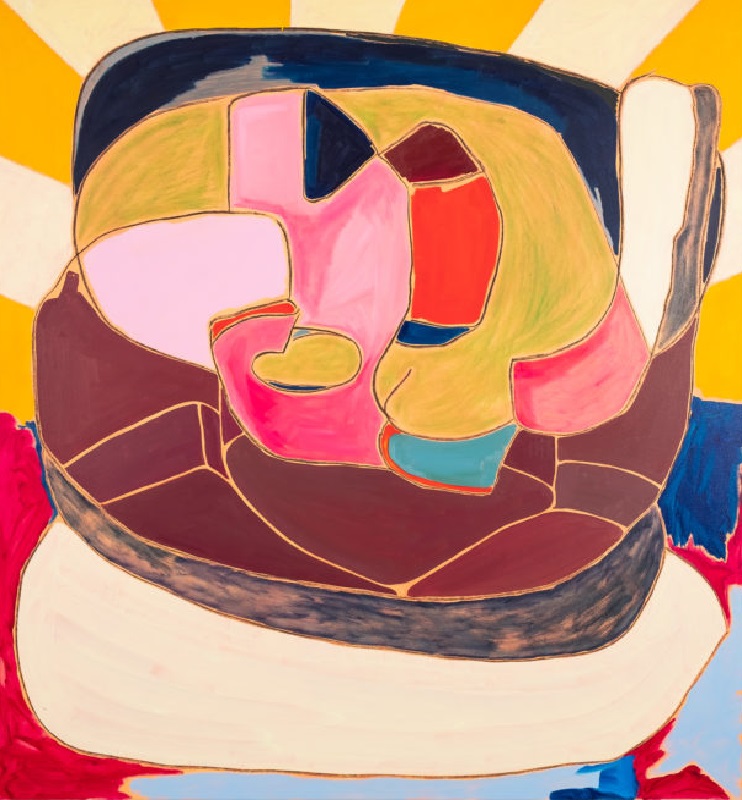 So Liber Lewis has maintained her bravery. The results are patchy, but why shouldn’t they be? The residency is designed to encourage experimentation: it’s a project, not an exhibition. History Lesson retains the most from her former mode, as the title may hint, and suggests a mask hanging against a chromatically divided background, triggering thoughts of social divisions and how hard it is to counter them once they’re entrenched. Phonic Lips employs whale forms, evoking another sound world, against a swelling background which does indeed have an aural quality. Sirius Paralysis foregrounds a green mamba which could equally be a sculpture, floating free of an architectural backdrop: the nature of civilisation seem in play here. Those culturally mediated examples are the strongest paintings here, but the overall title ‘Muscle Memory’ points to painting as an act of learned instinct. I’m not so sure Liber Lewis is in that place yet, and maybe she doesn’t need to be. I could get less out of, say, Cadence, Grand Ecart and Shape Shift, which seem to rely less on determinable form, more fully on muscle memory. To make that succeed, you need a very distinctive painterly language – like, to pluck three radically different abstract examples, Joan Mitchell, Jane Harris and Bernard Frize. Liber Lewis isn’t there yet – her abstract mode is somewhat generic – but she’s evidently brave, and has time. The same, I trust, can be said of Elephant West.