Anomie with Rodgers and Ketter - FAD Magazine
Skip to content 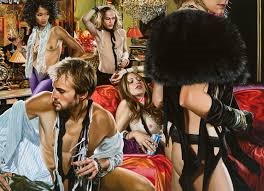 It may look an improbable pairing, but two shows opening last Thursday felt as if they had a common core. Terry Rodgers has his first London solo at Jerome Zodo: ten of his characteristically large, lush paintings of beautiful people. They’re in party mode, but hardly having fun: of the 40 figures whose faces are visible, none smile, and nor do they make any connection with each other: expressions which made sense individually loses coherence as separately posed models are brought not-so-together. It’s easy to assume that these are a routine production, but the painting is passionately engaged and Rodgers’ compositions can be daring, as in the radical prominence of a fur in ‘It’s Complicated’, 2017. There are no figures in Clay Ketter’s photographically-based works at Bartha Contemporary, where he has an impressive mini-retrospective. However, his most recent series, emphasises social isolation in a complementary way. Tract (2010-ongoing) – taken from satellite images stitched together with CGI technology – depicts the architecture which part-causes, part-consolidates the distancing which Rodgers depicts; and the formal interest is largely in the baroque interplay of pattern, just as it is in Rodgers. Are we setting up a world – offline and on – in which interaction has been impoverished to such an extent that the individual, never mind community, well-being is under threat? That’s what I take Ketter and Rodgers to fear. 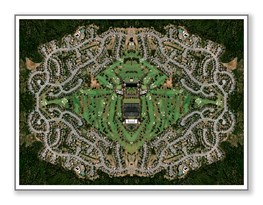