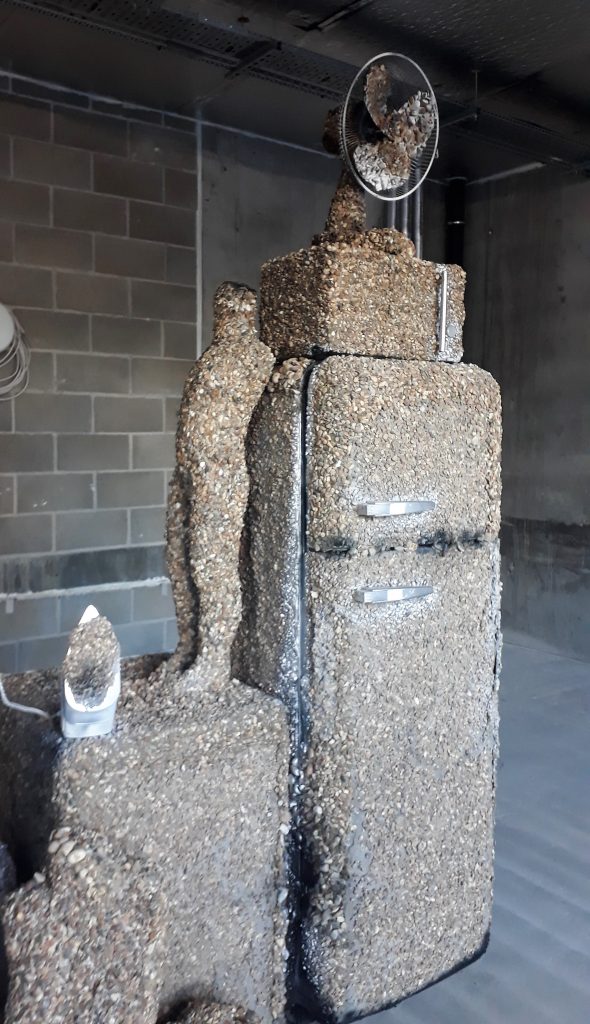 The annual Deptford X (21-30 Sept) may be a relatively small event in organisational and funding terms, but makes for a packed visit. Six commissioned projects form the core, and this year they’re all within five minutes of the festival’s hub on Deptford High Street. For example Laura Yuile has covered domestic items with pebble-dash in a striking estranging move, and had shop mannequins talk to each other as a stand-in for the restricted interactions of social media. I also enjoyed Louise Ashcroft’s subversion of the Festival’s own operational process: she attended a board meeting and persuaded its members to press various body parts into clay, which she has used to make a tea service for use at their next meeting with a title – ‘Fleshing Board’ – drawn from a report she found in the archives. The breadth of special projects is shown by the inclusion of a volume of playfully post-modern stories by David Steans – it starts with the author looking for the book in the library before he’s written it… The bulk of the Festival action is in 61 fringe events, ranging from well-known artists in established spaces to pop-ups in shops. My lucky dip suggested that the standard is good: Gossamer Fog (on the rare topic of technomancy), Castor Projects, Peter von Kant and APT all have interesting shows – the last being the biggest, with 41 artists from the Art in Perpetuity Trust studios each showing alongside an invited artist, throwing up many compelling conjunctions. Nor is it far to the new Goldsmiths CCA gallery, which has a seven room presentation of Mika Rottenberg’s compellingly grosteque work. So the area is well worth a visit…