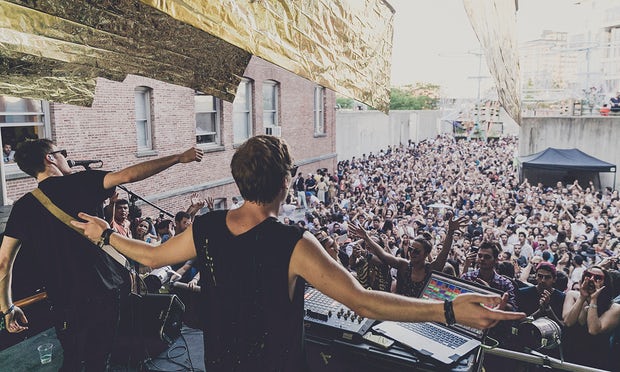 This article titled “Art of noise: how galleries became the best places to rave” was written by Lanre Bakare in Los Angeles, for theguardian.com on Thursday 29th June 2017 10.00 UTC

Next to a shiny Jeff Koons sculpture inside the Broad museum’s cavernous second-floor lobby, museum attendees mill around taking selfies with Takashi Murakami’s day-glo murals that dominate the wall space. As sultry electronica plays, a crowd of about two dozen sit cross-legged. Outside the building, designed by New York architects Diller Scofidio + Renfro, there’s a stage where Geneva Jacuzzi is beaming out her brand of cold-wave pop and performance art. Later on, Jenny Hval will emerge on the same stage to play her vampiric pop. This is all part of the Broad’s Summer Happenings event, which combines music and art under loosely defined themes (tonight is dedicated to Nico and Andy Warhol, whose work adorns the Broad’s walls).

A few weeks before, the nearby Museum of Contemporary Art put on a concert featuring rapper Lil B, which was part of the institution’s collaboration with London-based radio station NTS. There’s also Moca Music, a summer-long programme of gigs curated alongside local promoters Spaceland. On the other side of the city, Lacma has specialist jazz and Latin music programming. Live music is a vital component of contemporary art institutions in Los Angeles.

On the east coast, Moma PS1’s Warm Up series is now in its 20th year. The event, at the Moma outpost in Queens, has set the standard when it comes to music events in art spaces. Warm Up was originally influenced by Berlin’s day parties, and is based in the facility’s courtyard during the summer months. PS1 has allowed a different group of artists – booked by a curatorial team of label owners, music journalists and musicians – to take over, and it feels like a boutique festival in the middle of a city that leans towards booking dance music. (When Mia Hansen-Løve was looking for a location to film scenes for her dance music cautionary tale, Eden, she chose PS1.)

If you just came into a gallery on a Tuesday and there’s a band playing in the corner, I’m not sure that’s successful

“I think there’s a big distinction between music as entertainment and a music programme,” says Eliza Ryan, the music curator for Warm Up since 2010, who believes the event works because it approaches music the same way it would any other artwork. “We treat it the same way as paintings. It’s selected by a curatorial committee, and I think giving it that platform and the roots in the institution is really important.”

That approach of carefully curated bookings that place music acts in art spaces – which complement rather than jar against them – is something acts and curators are more aware of in 2017. Many have seen what happens when music acts are just plonked in an art space, and have to adapt to a unprepared crowd and inadequate sound.

“There may be people there just to see the show, but there might be 80% of people who are just at the museum to walk around and are annoyed that there is loud music being played,” says Jamie Stewart of Xiu Xiu, who plays at the Broad later this year.

Stewart believes letting the audience know what they’re in for is crucial to making it work. “It’s basically understanding the sonic physically of the space, and then making sure that the people who are coming there know what they’re getting into, and they’re not annoyed that they have to cover their children’s ears because it’s so loud.”

Ryan agrees. “The thing with Warm Up is that it’s a music programme. It’s not pretending to be something else. It’s saying: these are musicians presenting their work in that context in the museum. That distinction is important. If you just came into a gallery on a Tuesday and there’s a band playing in the corner, I’m not sure that’s successful, and I’m not sure it gives those artists the credibility that they deserve.”

Related: The Sound of LA

That credibility can often come across one key hurdle: sound. In purpose-built galleries, live music sonics are often the last thing architects consider. “Most museums tend to be rather large physical spaces, so there’ll be a very small PA and very large room, so the sound can be a bit daunting,” says Stewart.

To combat that, Warm Up works with its own dedicated sound technician, while Ed Patuto, director of audience engagement at the Broad, says getting the sonics right were a priority when the $140m building was being designed. “Before we opened, we spent a lot of time in our space doing sound tests to figure out what kind of music we could put where. I never want someone to walk away from one of our events and say, ‘I couldn’t hear, that didn’t sound good’,” says Patuto.

For galleries, music events have traditionally been used to bring in new visitors; those who might not come to a museum space. But the new breed of curators believe these live events are much more than just a chance to increase revenue.

“The Happenings are another way in to the artwork. I think it does help provide a more engaging experience,” says Patuto, who believes live events need to be more than just another way to bring different people into the museum. “It’s very common for museums to have popular groups or bands to bring in a new crowd. We said: we don’t want to do that; we want to do something that has a direct relationship with the collection,” he says.

That balance of engaging visitors with artwork and a live act is hard to pull off. At times during Hval’s set there were arguably more people chatting at the bar than looking toward the stage. But as people mill around, and take in the collection while sampling snippets of live music, it feels as though the two worlds have found a way to live side by side.

MoMA PS1’s Warm Up series starts this Saturday and runs until 2 September; The Broad’s Summer Happenings runs until 23 September; MOCA Music continues Thursday at The Geffen Contemporary at MOCA