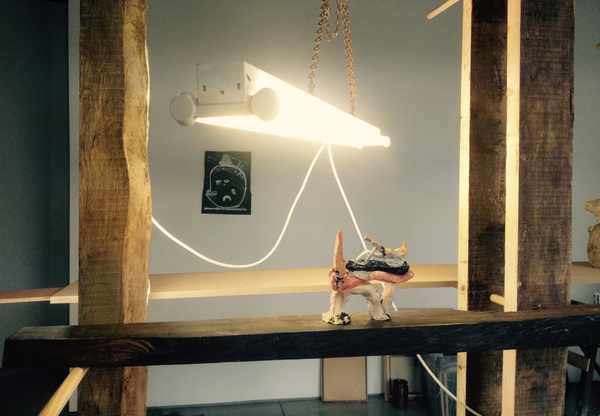 Rush views these separate, yet interconnected installations as ‘mise en scène’ constructions, wishing to emphasis the relationship between the exhibition space and artistic practice – and the tensions inherent between production, construction and presentation. The installations reference Rush’s interest in the history of folk ceramics, the process of wood fuelled ceramic firing and complexities of collaboration, collecting and curation.

The apparently playful nature of Rush’s practice belies his determination to approach life directly, positively and forcefully whilst remaining entirely open to the expressive subtleties that this practice creates. This gives rise to a gentle negotiation between play and what that play might produce; a place, which the artist is always seeking to court, consciously or not, and which his central to all his work. He cannot afford to be shy in his pursuit of this goal, but must hide nothing so as to meet his audience with a good will he hopes they will sense and return.

Rush’s approach to this place is fastidious. He uses a brash combination of materials to play with it and test its possibilities. This holds in both his direct practice and in all other directions – so that his interest in the forums of collaboration-collecting-curation are as great a preoccupation for him as those of production-construction-presentation.

This summer, Robert Rush collaborated with the artist Alex Hoda to curate a project entitled Rough Music. Commissioned by Cass Sculpture Foundation, West Sussex and designed and constructed with the expertise and assistance of Mike and Carol Francis, of Francis Ceramics, Pembrokeshire; Rush, Hoda and a number of the ten participating artists built a fast-fire wood kiln on the grounds of Cass Sculpture Foundation. For Rush and Hoda a fundamental factor of the project was to create an opportunity to bring the artists together in a unique working environment. In many ways much of Don’t Drop it Roby! has evolved from the essence of this project, one in which not only the collaborative environment, but the kiln itself are viewed as a unique sculptural space or as they put it, an: ‘open source sculpture.’

Part of Don’t Drop it Roby! sees the construction of a wood beam structure, balanced on top of which are newly made and found ceramic works, several of which evoking memento mori . The notion of discovery is key to Rush’s work as he discovers and shares what he has found along his search. Rush has said that much of what he is interested in is ‘the idea of failure and how it might constitute success, and much of what I do could be characterised as the management of actual or potential disasters[…]’ Through these forms the artist hopes to address the problematics of artistic territory and truth, and the boundaries between the art object, its site of production and eventual arena of display.

Rush doesn’t have a studio at the moment, preferring to work at his kitchen table or collaboratively in other people’s studios or onsite at the kiln.