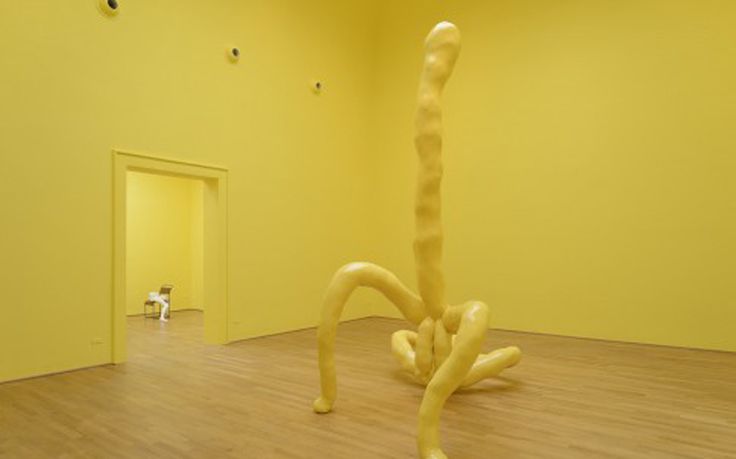 By the time you read this, the week’s two main events will have reached their weary climaxes and the braying crowds will be resigned to the usual disappointment: Nigel Farage will be prime minister and Venice will have flooded under the weight of so many luxury yachts. So in the dying moments of civilisation, let’s take a moment to congratulate Sarah Lucas on being one of the best artists alive.

It is an honour of the highest order to be selected to represent Britain at the Venice Biennale, and Lucas has done it in style, although very much in her own style. She has filled the British Pavilion with her trademark penises, cigarettes, cans of spam and casts of the lower half of her own body. But it’s all updated from the 90s sharks and Nazis shtick with pristine smooth surfaces and glossy colour, and she’s even painted the walls a garish sunshine yellow. It looks as if the YBAs have finally edged their way – more or less graciously – into the 21st Century without losing the post-Empire giddiness. It’s very Sarah Lucas and very Cool Britania, but at the same time it’s the kind of art we deserve and it’s the kind of art that we need.

It is the kind of art we deserve because it is the fruit of the hubris we aided and abetted in the 90s; it is the revelation that results from the cult of art as both popular pastime and ever-inflating bubble of the unregulated market; it is a result of rapture in the state of grace carved out by New Labour and coloured in by a gleefully complicit media circus. The transcendental possibility of Sarah Lucas is in the fact that we allowed it, and we allowed it because we wanted it, and we wanted it because, in the years of plenty and bad credit, it satisfied our bloodlust for shock, spectacle and the aestheticisation of the grotesque. Looking back, we might not choose this art now, but it represents us as the living ghost of our past selves on the international stage.

But it is also the kind of art we need because although Nigel Farage is not – insha’allah – having his day in the sun, we are in the grip of a low-intensity conservativism that threatens to boil over at any moment. The Big Society was all about government abdicating responsibilities that we are paying it to shoulder, which meant we were left to squabble amongst ourselves, so Cameron could get on with the business of dismantling the welfare state and driving us into ever deeper peril. One you have anesthetised the people with the looming threat of ever deeper spending cuts, the demolition of the NHS and the diabolical prospect of breaking ties with Europe, they forget that they have basic rights of freedom and equality. Gender, race, sexuality and intellectual freedom have saliently dropped out of the political landscape as issues that still need so much more work, and if they do need work then that is what the Big Society is for. It is perhaps incorrect to impute this revolutionary intention to Sarah Lucas, but it is a happy consequence of the statements she makes and the questions she asks. And it is as urgent as it ever was. 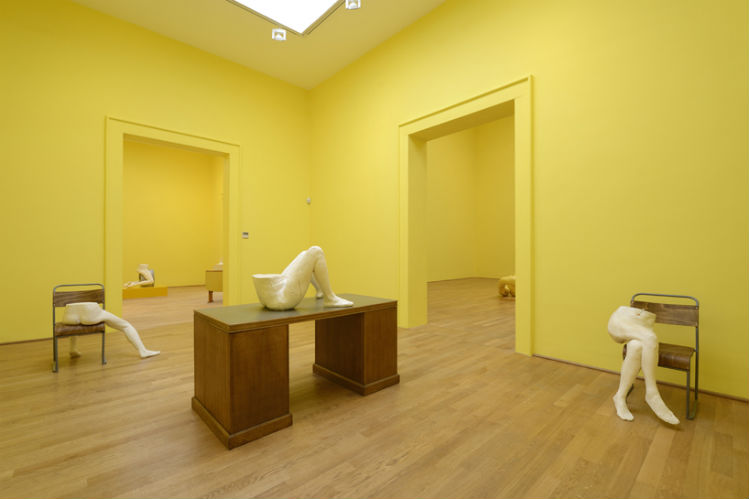 It is not fair to say Lucas’ work is shocking because that makes it sound childish, even puerile, thus negating its seriousness. Lucas, probably more than any other artist of her generation, understands the seriousness of her task, which is to take a critical stance on gender and sexuality through a masterful manipulation of form. Lucas’ work is visually striking, sometimes even aggressive, but it is also conceptually deep, often simultaneously referencing art historical traditions at the same time as conveying a social or political point. It is this combination of sensational visual form and intellectual rigour that makes the work so captivating; it unfurls before the eye and mind in a stream of cleverly connected ideas and associations that raise issues that, after two thousand years of civilisations, still need to be unpicked and reconstituted so as to be the best for all.

There never was a veil of ignorance, so the spoils of society have never been distributed according to a principle of equality, so Lucas provides us with uncomfortable images that lead us to question the objectification of women and the unworldly power of masculinity. It is more difficult to see it this way now because the work is more smooth and curvy and colourful and deliciously more expensive than before. But it is there in the Maradona sculpture where a weak pun marries the Hand of God with the Mother of God in a thrusting structure of manly power rendered in sunflower yellow and supple lines of luminous elegance.

On some level it is quintessentially British toilet humour about cocks and bums and fags, but it is also a vulgar and unsettling reflection of the pervasive ideology of our society, which it is still Lucas’ mandate to shove down our throats in between gulps of chardonnay and kale. She gets away with it, of course, partly because her fame and her gallerist demand it, but mostly because she has us hooked on the one thing we will hold on to tighter than our outmoded gender stereotypes: she makes art that mitigates its conceptual complexity and its ideological challenge with the fact that it is figurative, aesthetically alluring and titillating. And even people who don’t love inequality love art that looks like recognisable things, for figuration saves the intellectual work of unpacking conceptual schemes that might rock the boat that drifts oh so gently into apathy.