Daniel's Value and Ideas #67: The Doors to the Future - FAD Magazine
Skip to content 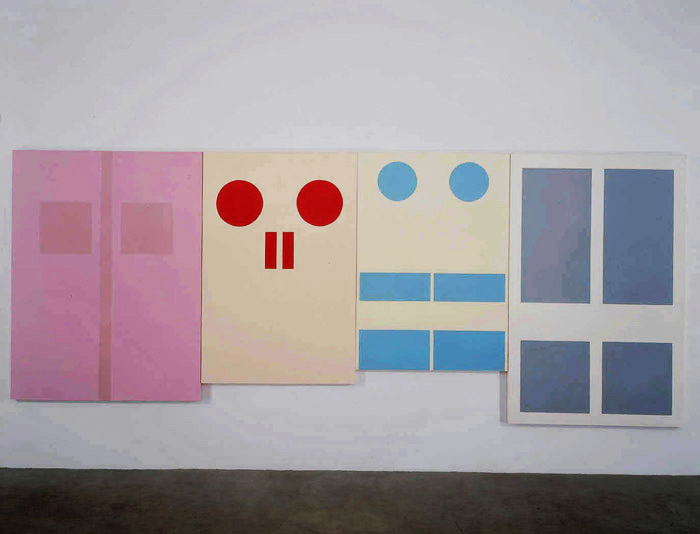 The door paintings quickly became iconic as soon as Hume started making them. It is sometimes difficult to tell, both at the time and in retrospect, what makes a work of art so immediately powerful. For Hume, it was more than the quotidian nature of his subject as a post-Duchampian gesture of rejection of the glorification of art because, at the time, that’s what all his peers were doing. The door paintings promised greatness for their creator because the impassive surface of the gloss paint, somehow inhumanly slick and lifeless, brought character and even emotion to the workaday subject of hospital doors. Monochrome handles, windows and panels seemed to arrange themselves in smiles, frowns and quizzical looks of defiance. They were bold aesthetic statements about something that nobody had ever thought of, and yet they were only swaths of paint.

One day in his studio, he just got bored as he was halfway through conjuring another door out of household gloss paint and decided to stop immediately. This should have been career suicide for him, as his gallerist at the time, Karsten Schubert, wanted him to continue, but he wouldn’t and so he dropped him. For Schubert, it was a matter of commercial viability: the doors had been lucrative and critically renowned in their short lifetime, making Hume an unthinkably urgent painter of the day. These imposing, stark door paintings were so popular – and rightly so – that it was difficult for Schubert to imagine that Hume would ever surpass this tender, youthful stage of brilliance, and he decided, apparently very casually, not to take the risk of following through on Hume without the doors. But instead of becoming the artworld equivalent of the One Who Said No to the Beatles or the One Who Rejected JK Rowling, Karsten Schubert is now one of London’s most respected art dealers, with a stable of artists including Bridget Riley and Robert Holyhead.

For Hume, it was a bold move to stop, so suddenly and without good cause, making the one thing on which his still developing career was founded, as if all commercial and critical success depended upon a single series of paintings. After all, he could have made a career out of that alone, since the world is replete with manifold different doors and shades of gloss. It could have been the end for him, so near to the beginning, as if his refusal to play ‘Smells Like Teen Spirit’ disheartened everyone who came to see the classics but could only ever be disappointed by the new. But Hume was picked up by Jay Jopling’s White Cube and thrust into stardom via the Royal Academy’s ground-breaking ‘Sensation’ exhibition. It was honourable of Hume to admit that he was bored of the doors and to have confidence that his entire talent didn’t rest on them; it was courageous to lose a lucrative gallerist in favour of a new dawn of experimentation. And it just about worked out.

The moral of the story is that doing the right thing is possible in an artworld that favours commerce as the first-born child of his sweaty loins. Both Hume and Schubert took a risk in doing what they felt – at the level of conviction and nothing else – was the right thing to do, and it difficult to imagine that either is poorer in money or spirit because of it. They both acted on instinct, Hume for his artistic career and Schubert for his gallery, and they survived. Indeed they both flourished without each other and they both got through life knowing that once that they did what was right. And it was all OK. So, kids, next time your instinct pulls you in a counterintuitive direction, and yet tugs so hard that you wince with the pain, let it lead you, and you might just be surprised to discover that, after all, you know what’s right and everything will be fine.