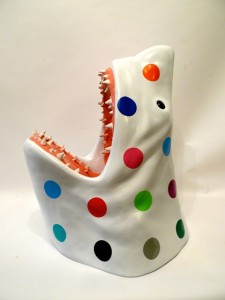 The Winter Pride Art Awards celebrated its second year last Saturday with a ceremony at Tobacco Dock. It was a glittering event, with wild entertainment, fine food and fine art, not to mention plenty of cocktails. Behind the glamorous veneer of an awards ceremony to celebrate young, emerging artists, Winter Pride has a serious and urgent mission which is so often overlooked in the wider artworld.

Winter Pride was founded in 2013 by LGBT activist and club impresario, Rebecca Paisis, and is directed by Simon Tarrant, who is the press officer for Lacey Contemporary, which will be hosting the finalists’ exhibition next week. Its mission is to promote issues of LGBT awareness and interest through emerging talent in the arts and to support likeminded charitable organisations. The annual art competition is open to all, regardless of sexuality or gender, offering £1000 prizes for achievement in visual and performing arts.

The artworld, which likes to think of itself as tolerant and progressive, is surprisingly bad at having a social conscience. Every so often, it will latch on to something, not so much because it believes in it but more because the artists therein are making a lot of money for the Gagosians. That is not to say that neither the artworld nor artists have no conscience, but only that the rights and well-being of minority groups are relatively rare in art. It is therefore refreshing that Winter Pride exists in order to use the manifold resources of art to draw attention to issues that art often ignores in the hope that somebody else is taking care of them.

We are all guilty of this liberal complacency so long as we never stop to think how lucky we are that nobody ever questions or comments upon our sexuality as we go about our business. As a gay man in the artworld you enjoy the luxury of being treated as completely normal, rightly receiving more scorn for the quality of your work or your suit than for your sexual orientation. Besides, the artworld loves to gossip too much to miss out on the gossip that we invariably generate with our misadventures.

Winter Pride brings home the fact that this acceptance is not a luxury at all but is rather an incontestable human right. You only have to recall this government’s palpably absurd notion that we had to debate gay marriage, as if the universal application of human rights is something that needs to be discussed, to realise that there is always some cretin who wants to question your rights. There was an electrifyingly stark moment when Panti, tireless gay rights activist and winner of the humanitarian award, crystallised a life’s work in the right to hold your boyfriend’s hand in public. For a moment during that speech, we forgot about the art and remembered how bad life can be outside of our bubble. 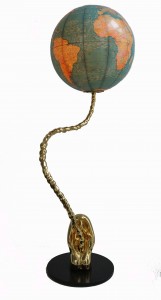 Winter Pride’s great trick, aside from the rousing speeches and immaculately undressed waiters, is that it is steadfastly about recognising achievement and diversity in the arts. It would actually have been rather crass and obvious if its focus was queer art, as if nothing had ever happened since Tom of Finland or Derek Jarman. That would have only perpetuated the myth that gays are obsessed with their own Otherness. The overall winner of the Visual Art category, Emma Elliott, presented her disconcerting sculpture L’Origine du Monde (2013), which has more to do with feminism than with sexuality as such. The Performance Art award went to Kimatica for Simulacrum: A Contemporary Ritual, a chilling exercise in gothic burlesque.

Finn Stone, one of the finalists featured in the exhibition, is especially worth a mention for his pop sculptures. He presented his Hirst-like sculptures of shark’s heads and dogs covered with SpotsTM. When you first see them, you do think for a moment that they are genuine Hirsts, as if he had done his usual whack-a-spot-on-it trick for charity, but closer inspection reveals that spots are not uniformly spot-width apart across the surface. These works are beguiling because they subtly alienate us from the ubiquitous Hirst in such a way that it’s disorientating. They do this by enacting precisely Hirst’s trick of being visually seductive rather than outright shocking, so you paradoxically end up shocked by the fact that you have been so easily seduced by something that should be utterly unremarkable. It is as if the beauty of it all is in the fact that Hirst sucked all the beauty out so long ago that we no longer notice that it is not there.

There was, however, a dark ending to the night. While we were revelling in the caverns beneath Tobacco Dog, enticed by another Jam Collins and a trip to the Bear Pit, eight artworks by Jane Moore and Eleanor Pearce were stolen. It is a great shame that malicious idiots manage to infiltrate and doubtless masquerade as a part of such a worthy event as Winter Pride. Hopefully the works will be recovered and the perpetrators will be shot at dawn. It just goes to show that no matter how hard you try to do the right thing and no matter how many delicious cocktails you altruistically give to some people, the flaws in human nature seep through even the tiniest cracks in every effort to make the world a better place.

The Winter Pride exhibition is at Lacey Contemporary Gallery until 29th November 2014.

Anyone with information on the stolen artworks should contact Simon Tarrant, info@simontarrant.com 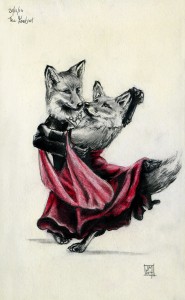