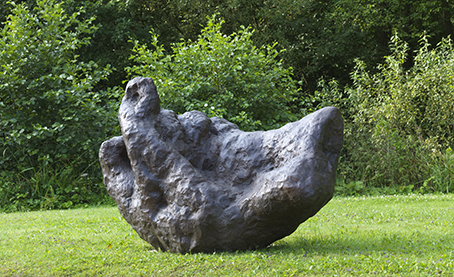 The biggest work at Frieze – a 10 metre high blow-up of a cartoon figure by Kaws – was one of the worst, given that Paul McCarthy has already done better than what it aimed to do. It isn’t always bad to play with scale, but it does need an original impetus.

Frieze had other trite examples, but what must be the heaviest show in London – Richard Serra at Gagosian – is one of the best. I also like William Tucker at Pangolin (to 29th Nov), who pushes monumental sculpture to the brink of lumpy abstraction. His bronzes are full of surface interest, and often at a scale which further slows recognition: it takes a while to see that the six foot long Secret is a hand – in fact it derives from a photograph of Tucker clutching the evidently inspirational Venus of Willendorf.

Damien Hirst tends to get a bad press these days, and I go along with most of that. In Schizophrenogenesis (Paul Stolper Gallery to 15th Nov) though, he makes a simple idea work punchily by vastly enlarging his science vs death pharmaceutical pills ‘n’ packaging stream: that box could be a coffin, that syringe could harpoon a whale, those pills are more than meals in themselves. With the implication of greater impact from the medicine and buzzier highs, perhaps, from drugs, there’s a logic at work which takes this beyond the formulaic move of blowing the small up big.