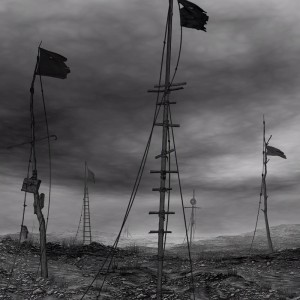 IC-98 return to Beaconsfield on a grand scale with a diptych: Arkhipelagos (Navigating the Tides of Time), 2013, and Arkhipelagos (Ebb), 2013, to be shown across the main gallery spaces.

The new works are part of IC98’s ‘Abendland’ project, an elegiac vision of the world after the age of man, further cementing IC-98’s artistic reputation in Scandinavia. In 2015, IC-98 will represent Finland in the Venice Biennale.

This is IC-98’s second exhibition at Beaconsfield following their debut UK show in 2012. Visitors to Beaconsfield’s Arch space were enthralled by the highly detailed pencil-drawn animation, A View from the Other Side, 2011, which focussed on the slow passage of time in relation to an architectural representation of human endeavour.

Arkhipelagos builds on this work, with a broader take on planet earth and the mark making of man on its surface: a collective signature for the future.

Established in 1998 and based in Turku, Finland, the group’s original name was Iconoclast, an allusion to the destruction of images and antagonism towards prevailing values. The group’s members are Visa Suonpää (b. 1968) and Patrik Söderlund (b. 1974), who, through their approach to the virtual, articulate a language of becoming; a cartography of the imagination. www.socialtoolbox.com
Beaconsfield supports artists who use art as a tool for challenging the status quo, catalysing change through the exchange of ideas.

Friday 25th April from 6pm: Beaconsfield and Space Station Sixty-Five present a special event with a focus on artists from Finland. www.beaconsfield.ltd.uk