Beaconsfield is located along side the railway arches between Vauxhall and Waterloo, and has nesteled into its niche at the crossroads where the institution, the commercial and the ‘alternative’ meet. The work shown here is always done so within the context of a holistic vision, with the aim of forging a critical space for creative enquiry. The charity moved into its home in the former Lambeth Ragged School in 1995, and has become something between a laboratory and presentation space, with a history of innovative collaboration with other organisations and individuals. 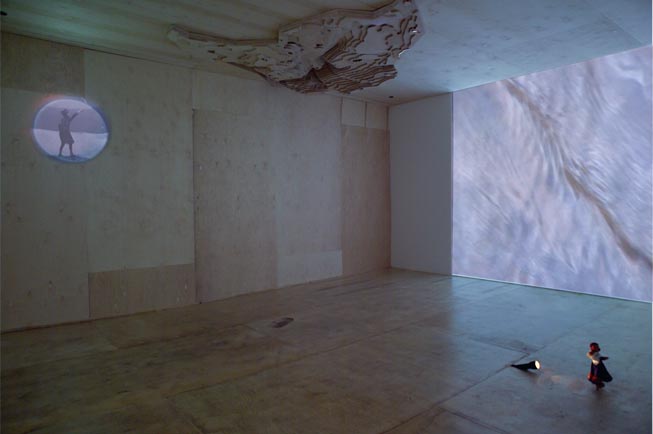 Tonight they are open from 6.30 with the first night of influential Norwegian artist Sven Flygari Johansen’s first UK exhibition Am I making up what really happened? is a revisiting of earlier seminal pieces in an ambitious new commission specifically for London. Themes explored include indigenous culture, capitalist meltdown, patriotism and global politics, shaped with sticks, stones and complex computer programming. Code for all Flygari’s digital works is written by Jonny Bradley with whom he has collaborated since 2001. As part of his project, Johansen has invited Frode Halvorsen and Jorid Lekve Eide to make work for Beaconsfield’s FlatScreens in the Canteen Gallery.

Svein Flygari Johansen is a creature of the forest and fjord. He spends the summer months high up inside the Arctic Circle, wild salmon fishing on the river near which he grew up in the northernmost city in the world – Alta. Otherwise he is based in Oslo engaged with the international discourse of contemporary art. A fundamental identification with nature is at the core of Flygari’s work where imagery from the organic world connects with high technology.

Water is a motif that runs through Flygari’s artworks: his local Alta-Kautokeino waterway was the site of the only instance of civil unrest in Norway’s recent history: a political controversy in 1978 that centred around Sámi land rights and had a huge impact on the national psyche. The disjunction between ancient and contemporary cultural identities is a recurring focus for his work and several earlier pieces on the theme will be recreated for this exhibition, to complement a major new commission.

This is the third in the Beaconsfield series Phase, which turns the spotlight on mid-career artists with whom the organisation has a significant relationship.