GOSEE: Peace One Day at The I.C.A London - FAD Magazine
Skip to content 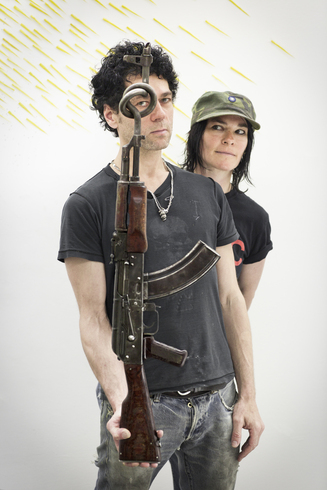 Mat Collishaw and Tim Noble and Sue Webster have lent their support to ‘AKA Peace’, an exhibition for which leading artists refashioned decommissioned AK-47 assault rifles into works of art.

The exhibition, which is curated by Jake Chapman, was conceived by photographer Bran Symondson following his experiences as a soldier in Afghanistan.

“Everyone knows the AK-47 and I thought, wouldn’t it be great to take this iconic weapon and turn it into a thing of intrigue and art, rather than one of fear,” explains Symondson. “You give a stick to a boy and he’ll make it into a gun. There is glamour in war and conflict. I don’t think [this project] glamorises [the weapon], I think it gets the message across that it can be used for something else. The fact that these AK-47s have been used, that they’ve come from war zones and now they are decommissioned…there’s 24 less AK-47s in the world doing damage.”

The exhibition will be followed by an auction of all of the works held by Phillips de Pury & Company.
The auction will be held at Howick Place, London SW1P 1BB on Thursday 4th October 2012. Proceeds of the sale will go to the Peace One Day charity.