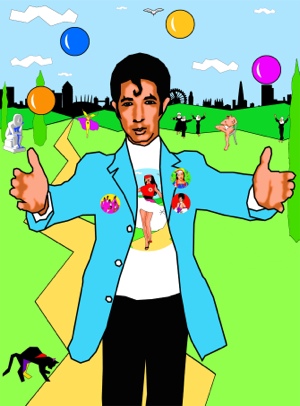 Duggie Fields’ world is a stunning combination of Popular and Classical imagery reworked by the artist into his own cohesive signature style. The Gallery Liverpool, will present an exhibition by the acclaimed British artist, as part of the Liverpool Biennial Independents 2012 running from 14th September until the 15th October.

The exhibition will include paintings, prints and objects designed by the artist, which open a window into the flamboyant world of this colourful and prolific artist.

It is an exciting tour of Fields work to date, with pieces from his archives as well as previously unseen work. For this exhibition selected iconic images created by Fields are presented in a new way, with his high colour, Post – Pop figures, turned into large wall mounted perspex sculptures.

Duggie Fields is an artist of Post Modern perfection and has held solo exhibitions in London, Tokyo and New York. We are delighted to present, for the first time in the North West, an anthology of his dynamic and dazzling paintings and imagery.

Welcome To My World is curated by Duo Vision; James Lawler & Martin Green and is supported and produced by Homotopia, The Gallery Liverpool, Arts Council England & Liverpool City Council.

Pictures From : KYD Cut-Ups Pop-up Projection Exhibition, launched at various locations across London with Daniel Radcliffe on Thursday 21st November to tie in with the December UK release of the film ‘Kill Your Darlings’