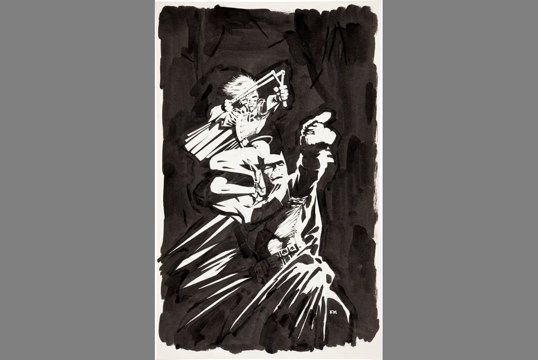 The first, the Absolute Dark Knight Book Cover Original Art (DC, 2006), is an immensely popular, bone-jarring image that brings together the elements that made Miller’s vision of the Batman such a legendary work of industry-changing artistry. It carries a pre-auction estimate of $50,000+.

The second piece from The Collection of Frank Miller is the Frontispiece Splash Page Original Art from Batman: The Dark Knight Returns (10th Anniversary Edition) Batman and Robin (DC, 1997), from an edition of the comic released a decade after its inception. It also carries a pre-auction estimate of $50,000+.

For the 10th Anniversary Edition of the ground-breaking series, Miller created this perfect stand-alone image of Batman and Robin (Carrie Kelley, the first female, full-time Robin) in action and in their element, cloaked in the darkness of night.

“This piece is a direct reflection and front-on view of Miller’s famous original splash page of the Dynamic Duo, which shattered all existing records for a piece of comic Heritage’s May auction last year,” said Ed Jaster, Senior Vice President at Heritage Auctions. “Needless to say, we expect great demand in the market for this visionary piece.”

The work has been locked away in Frank Miller’s own collection since the 10th Anniversary Edition’s publication and, unlike many pages from the series – where differences between the original art and the published version are evident, as a result of Miller making changes on paste-overs – no changes were made to this artwork for publication.

Miller’s Dark Knight art is among the most important and sought after by collectors, and such singular stand-alone images of his Batman and Robin rarely come surface for sale. While Miller worked with Klaus Janson and Lynn Varley on the artwork for the 1986 series, both of these images are rare examples of 100% Frank Miller pencils and inks on his most popular character. 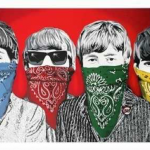