The Romanian artist Adrian Ghenie is widely regarded as one of the most exciting painters of his generation.Using found imagery and carefully constructed tableaux his seductive yet challenging figurative paintings explore complex ideas about history, memory and political and cultural extremism. For his first exhibition in London since 2009, Ghenie has marshaled an extraordinary array of references. His new works bring together figures including Charles Darwin, Josef Mengele, and Francis Bacon and subjects such as the English landscape tradition, eugenics and nuclear testing, in order to address complex ideas about the morality of scientific research, the possibilities of portraiture and the nature of evil.

Taken together Ghenie’s paintings in the exhibition constitute an interconnected and extended meditation on the nature of evil and mankind’s propensity to subvert good for bad. In the artists’ words, ‘I am interested in the presence of evil, or more precisely how the possibility for evil is found in every endeavor, even in those scientific projects which set out to benefit mankind.’ In the exhibition these ideas are explored by connecting Darwin’s work on Natural Selection to the Nazi quest for Aryan perfection, our animal nature, eugenics, breeding and the English aristocracy, and the terrible legacy of nuclear research.

The exhibition contains a group of new paintings alongside a large-scale collage installation made directly onto the walls of the gallery and new stencil portraits. The paintings include portraits of Darwin, Ceausescu and Mengele, images of dogs and monkeys, and two large works depicting a nuclear test and the wreck of a German bomber lying in an English landscape.

This will be the first exhibition in the newly renovated 6 Haunch of Venison Yard, the gallery’s original home. For the last year Ghenie has been resident in London and his new work is in part a response to the city and its history. As such it will form a very appropriate opening exhibition for a building which is itself a historic eighteenth century townhouse reconfigured as a twenty-first century art gallery.

Adrian Ghenie (b.1977 Baia-Mare, Romania) graduated in 2001 from the University of Art and Design, Cluj (Romania), and lives and works in London, Cluj and Berlin. Recent solo exhibitions include Stedelijk Museum voor Kunst (SMAK), Ghent (2010) and the National Museum of Contemporary Art, Bucharest (2009). Important recent group exhibitions include The World belongs To You, Palazzo Grassi, Venice (2011), One of a Thousand Ways to Defeat Entropy,
Arsenal Novissimo, Venice (2011), The rystal Hypothesis, GAMeC, Bergamo (2010), Romanian
Cultural Resolution, Spinnerei, Leipzig (2010), the Prague Biennial (2009) and the Liverpool Biennial (2008). Ghenie will have his first museum exhibition in the US at the Museum of Contemporary Art in Denver in 2012.

Adrian Ghenie’s work is included in important international collections including the SMAK in Ghent, the MuKHA in Antwerp, the Los Angeles Museum of Contemporary Art, the Hammer Museum, Los Angeles, and the San Francisco Museum of Modern Art. 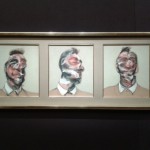