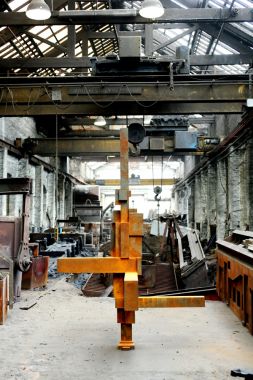 Engaging our mobility, Gormley considers how time acts on objects and how objects act on us.

In the lower ground-floor gallery, Gormley will exhibit a new installation of ‘Breathing Room III’ the third and largest in this series of works which contain and implicate the viewer as the figure in a shifting ground.

As a physical manifestation of the gallery, ‘Breathing Room III’, is made from 15 interconnecting photo-luminescent ‘space frames’, the total volume of which is equal to that of the internal gallery space.

Time and light are the principal materials of the work. ‘Breathing Room III’ encourages the viewer to enter into and interact with a defined sculptural space, where intense bursts of light interrupt complete darkness, unexpectedly jolting the experience from one of quiet meditation to acute interrogation.

A new series of sculptural works will populate the ground-floor gallery, furthering the artist’s investigation of the human body and its relationship to the built world. These new, massively extended block works use an architectonic language of stacking, propping and cantilever to suggest a tension which is indicative of our urban-bound human condition.