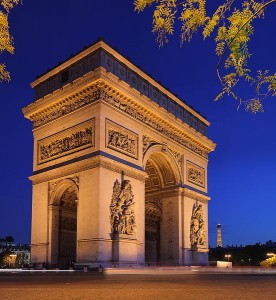 In the first of an occasional series, FAD brings you it’s suggestions for city breaks in destinations chock-full of culture. Where to stay, who to take and of course, what to see right now.

Paris
We won’t waste space waxing lyrical about the art history of this city, suffice it to say that no cultural education is complete without a sojourn in the city that has produced generation upon generation of artists, each sure that what went before needed to be replaced with something new and fabulous, and that they were the ones to do it.

The unique blend of a haute bougeousie prepared to support the arts, cheap rents, great food, and a fantastically low down and dirty nightlife has made the place a magnet for artists from around the world for years, and it continues to be a great place to revivify a jaded eye.

Get There, Stay There
Paris isn’t just for lovers y’all. Take the kids on an urban art safari this summer and explore the parks, playgrounds and culture of the French capital. There are a host of good deals to be found, and you can minimise your carbon footprint by taking the train direct to Paris from almost anywhere in mainland Europe.

FADWebsite was feeling kind of ritzy recently, and stayed at the charming Sofitel Paris Arc de Triomphe, just off the Champs Elysee and in easy reach of both the hustle and bustle of Paris’ biggest shopping street, and the chilled out environs of the beautiful Parc Monceau (take an ice cream and some sunblock – we did).

For those travelling in a large family group this is a great hotel as not only are the staff wonderfully helpful and very kid-friendly, but there is a huge choice of connecting rooms and suites. It’s a traditional design, heavy on the yellow damask (drawing unavoidable comparisons with the saucy Wes Anderson short film Hotel Chevalier set in a mythical hotel of the same name – see what we mean here) with unbelievably soft beds. Breakfast is fabulous, and the chef will make you a picnic basket for the park if you ask nicely. Told you we were ritzy…
Sofitel Paris Arc de Triomphe 14 rue Beaujon 75008 PARIS, FRANCE (+33)1/53895050(+33)1/53895051

What to See Right Now

Ne Dans La Rue, (Born in the Streets), Graffiti Fondation Cartier pour l’art contemporain
Until November 29th 2009
The Fondation Cartier has bought the history of street art into the warm embrace of the French art institution with it’s new show ‘Born in the Streets – Graffiti’, an exhibition devoted to graffiti and street art. Occupying the entire gallery space, as well as the building’s façade and surrounding garden, the exhibition highlights the extraordinary expansion of an artistic movement that developed on the streets of New York in the early 1970’s to rapidly become a worldwide phenomenon.

The show features work from pioneers such as P.H.A.S.E 2, Part1, and Seen, who with many others pioneered the movement, alongside artists such as Jean-Michel Basquiat and Keith Haring whose work, though born in the streets, ultimately took a different direction. Finally, the exhibition showcases the work of some of the most brilliant figures on the contemporary scene, including Vitché, Nug, Evan Roth and Barry McGee.

FAD favourite Evan Roth has created Graffiti Taxonomy Paris, a unique taxonomy of action writing based on computer analysis. See it online here and emblazoned across the Fondations glass façade.

Don’t miss screenings of the film Pixo by João Weiner and Roberto Oliveira, chronicling the rise of São Paolo’s distinctive pixação style of street art and the lives of the pixadores who create it. 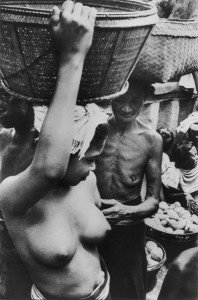 Henri Cartier-Bresson Musée d’Art Moderne de la Ville de Paris Until 13th September 2009
Henri Cartier Bresson is a historic figure in the annals of 20th Century photography, a photographer who lived for the perfect moment, and whose distinct aesthetic was influenced by his close friendships with the modernists.

The Musee dee l’Art Moderne’s newest exhibition is the reconstruction of a show originally staged by Cartier Bresson himself in 1978, which subsequently toured Europe for many years. Cartier Bresson called the exhibition “Forty Years of Photography”, and it is a very interesting example of the way in which the artist viewed his own work.

Comprising more than 70 images, the show is a sort of ‘best of’ selection of the artists work, and more than it’s content, the way in which the work is presented, remaining true to the principles of the first exhibition, provides a glimpse of the way that exhibitions were hung in the 1970s – the images are an imposing size at 70x90cm, and are mounted on card and hung without frames. 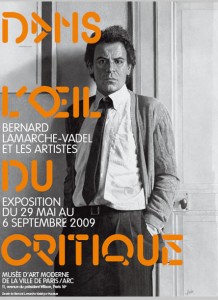 In The Eye of the Critic : Bernard Lamarche-Vadel and the Artists Musée d’Art Moderne de la Ville de Paris
Until 6th September 2009

Intellectuals have long been fêted in Paris, and the Musee d’Art Moderne de la Ville de Paris latest exhibition is based around a luminary of the French art world. A peculiarly French exhibition, In The Eye of the Critic : Bernard Lamarche-Vadel and the Artists is a celebration of the life of one of Frances foremost art critics, a renaissance man whose flamboyant personality, acutely perceptive eye and insightful writings placed him at the heart of the art world from the 1970’s until his untimely death in 2000 at the age of 51.

Little known in the English speaking world, Bernard Lamarche-Vadel was a seminal figure in French art, champion of artists by turns a gallerist, critic, art theorist, exhibition director, and writer. In The Eye of the Critic : Bernard Lamarche-Vadel and the Artists is a reflection of the role and the engagement of an art critic with French and international art.

Over a 1000m² space, the curators have conceived the exhibition as salon, providing areas to sit, read and digest this seminal figure’s critical analyses, essays and correspondence in the presence of 200 works from more than 60 of the artists discovered, defended and treasured by Bernard Lamarche-Vadel.