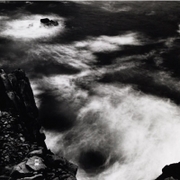 Charting a two year journey to the polar regions of the Atlantic basin, the exhibition True, from renowned international photographer Thomas Joshua Cooper, presents new works from the series, The World’s Edge – an ongoing work that seeks to map the extremities of the land and islands that surround the Atlantic Ocean.

For the past 30 years, the artist has travelled to some of the most isolated and far-flung locations across the globe, making images with his 19th century Agfa camera and specially made photographic plates.

The World’s Edge was initiated in 1990. Each work begins as a location found on a map, researched and tracked down, and after often difficult journeys by air, sea and land, only one photograph is made per location on Cooper’s arrival. The World?s Edge began with trips to chart Europe and Africa, and the last outstanding journey along the Atlantic coast of North America from Labrador through to Cape Cod and on to Key Largo is planned for spring 2010.

The 79 works in this exhibition include images made in the North and South poles, at the northern most land points of Norway and Greenland, and the most northerly point of the Antarctic Peninsula, Prime Head, which has had fewer human visitors than the Moon.

The exhibition True required some of the toughest journeys for Cooper to date: over three months at sea, sailing into areas marked as ‘uncharted dangers’ – territories where rescue teams never venture and in which insurance companies are not able to provide cover – and treacherous weather conditions, including extreme storms caused by the El Nino and being snowed into the South Pole for 13 consecutive days.

Constructed only and always of the landscape, Cooper’s images are devoid not only of figures and animals, but all human trace. Using the chiaroscuro technique – the use of long exposures and low lighting to create distinct areas of light and darkness – the resulting images describe the darkness of cold water, white voids of fog, submerged rocks icebergs and the geology of rocks.
(Haunch Of Venison)

ART NEWS: NEW Art Gallery for London
ART STUFF on a train # 26: ‘Sex and Excess’
The last exhibition at Haunch of Venison ? José Parlá on video from NOWNESS
Haunch of Venison Gallery to Close !