Tabish Khan the @LondonArtCritic picks his favourite exhibitions to see this month – this time they’re all shows featuring sculpture. Each one comes with a concise review to help you decide whether it’s for you. Those looking for more shows should check out last week’s top 5 where all are by female artists and remain open.

Zadok Ben-David: Natural Reserve @ Kew Gardens
Enter a room filled with hundreds of tiny black plants embedded in sand and slowly work your way around them and they will burst into colour as they’ve been painted black on one side and their actual colours on the other – the effect is so breath-taking I want to go back in time and experience it for the first time again. Accompanied by a selection of his smaller works it’s one of this year’s unforgettable exhibitions. Until 24 April.

In this moment @ Bethlem Gallery
Fancy hugging an artwork? Or how about making your own music by placing wooden birds at different perches on a structure? It’s very much a case of please do touch the artworks in this creative interactive show that you can feel and listen to. The museum in the same building is playing host to the surreal world of cats painted by Louis Wain in a range of styles, which is also worth seeing at the same time. Until 14 April.

Children of the Light: Spiraling into Infinity @ Paradise Row
A long light sculptures pulses in different colours, speeds and intensities in a darkened space. The effect is mesmerising and even after I look away I can still see the after images of the pulses in my eyes. Inspired by a collaboration with a dance company it’s clear to see the links as the lights move as if in sync to an inaudible beat. Until 18 March.

Feathers, Bones and Stones @ Pangolin London
Whether it be a flowing dress made from sliced deer antlers by Susie MacMurray or a contorted mythical skeletal creature by Abigail Fallis, this group show made from animal parts or referencing animals is a fantastic collection of sculpture that’s both beautiful and unsettling. Until 19 March.

Fausto Melotti: Theatre @ Hauser & Wirth
It’s like I’ve ventured into the studio of a miniature set designer in this selection of small scale sculptures by Fausto Melotti. He would go on to design theatre sets in later life and yet there’s clearly a theatrical element to these earlier works and I found myself constructing a narrative for each piece in the show. Until 20 April. 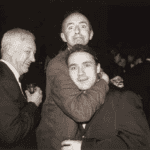