Van Gogh Self Portraits - To be Blue. - FAD Magazine
Skip to content

The first thing to notice about Van Gogh Self-Portraits showing at the Courtauld is that there are always two Vincents to study. Owing as much to our worship of the biography of an artist,  often so much as their work, Van Gogh’s portraiture reveals the same tendencies askew in his signature style. Hanging on the delicate impressionist thread between realism and abstraction,  this latest collection of his self-portraits (unprecedented in the UK), showcases a unique and tragic intimacy of how the artist related to himself. To pull the quote printed above the  entrance:

At least by evidence of the paintings, which are tectonically gorgeous, Van Gogh seemed about as aware of this tendency towards splitting himself as any of his contemporary audience.  Interspersed with bouts of madness, characterising the time spent producing the vast majority of works exhibited, runs a narrative thread of the Dutch painter’s steady obsession with the identity of the artist, and how best they should be represented. In immediate departure from the imitation of inspirational heroes Monet and Seurat, already amongst some rough sketches hung in the first room a dichotomy emerges between his realistic and detailed likeness and the impassioned and rushed character that he would come to embody. Much has been said of Van  Gogh’s erratic behaviour and self-installation to a mental institution in 1889; but several portraits and one ear later, the artist had undoubtedly transformed quite fully from Vincent to  Van Gogh as we know him. In a careful bit of curation, the gallery plaques alongside the images note a similar shift in his early work; from presenting himself in the Parisian bourgeois clothing of his time to standard blue painter’s smocks, emblematic of Van Gogh becoming the character of his own study and fascination. Whilst mutterings of guests on the gallery floor suggest that historians prefer not to think of him as a narcissist nor particularly vain, these works together suggest an overwhelming desire for the disparity to be the strongest theme of the exhibition; that Van Gogh wished to stand-out as an artist and individual.

This was crystallised in a brief encounter with Marina Vaizey, stood before the enigmatic 32nd  Self-Portrait from late August 1989, which displays the artist in the depths of his suffering whilst at Saint-Paul-de-Mausole asylum. She noted how defeated he was within the institution;  how little the work exhibits his trademark flair for high-contrast bright colours and flourishes in the oil daubed on canvas. Likewise, another guest pointed to how in his degradation, he had begun to blend into the background of the image; sinking into the sickly and maudlin atmosphere of his setting. It is something of an antithetical piece, created by an individual mired in his circumstances, that sits separately to the other pieces gathered in the gallery. Both in his style against the conventions of traditional art, and his representations against their subjects, it is the painter’s disconnection that emboldens the rest of his self-portraits. Captured over years of psychological frailty, confident experimentation and final collapse, Van Gogh’s development is a steady pace towards embracing those artist’s overalls in opposition to the everyday; to chase unfulfilled dreams of establishing an art colony in Arles, South of France,  and to become permanently clad in his signature blue. That’s the greatest tension between the works; the drama of reaching for a vibrant image and then in mania falling short. At his healthiest and most flamboyant he wears azure like armour, as during his short-lived recovery in the 33rd Self-Portrait from the first week of September 1889, and at his most vulnerable Van  Gogh slips into the shadows. A performance of madness, certainly, but a theatre of self-portraiture, and an event for London’s creative community that stands only to rouse its younger painters and art lovers alike; it is the exhibition of a man who pursued the becoming of what he was. It is beautiful. It is on show until May 8th. courtauld.ac.uk/van-gogh-self-portraits 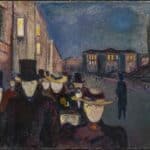 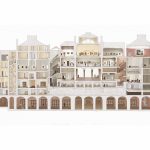