Is there a better way to mark the return to in-person gallery visits than with a commission based around them? The curatorial team at Reggio Emilia’s Collezione Maramotti evidently think not, and at the start of November hosted the debut performance of its newest commission La Visita, a contemporary work by the Belgian dance company Peeping Tom.

The choreographer Gabriela Carrizo is the founder of Peeping Tom and she has led a team creating a darkly engaging work that challenges its audience in a way that has become a leitmotif of the company, creating a bizarre, disconcertingly coherent alternative universe in which reality and art are tightly entangled. La Visita is a site-specific creation in which the dancers follow a narrative structure that takes them and the audience on a physical journey through the galleries of the Collezione Maramotti, challenging as they do, ideas of perception, seeing and being seen.

We may have all experienced the jolt of suddenly seeing that something is other than we had believed; whether an idea or an image. It’s the moment where the image of the young woman suddenly becomes the crone, or when Escher’s stairs suddenly cease to make sense.  For Carrizo a profoundly personal experience generated the perception jolting moment that she has explored so successfully in much of her work with Peeping Tom. After the death of their mother, a painter, Carrizo and her sisters chose to build a bonfire of their mothers works and in the moments that the fire consumed them, the sisters were struck by how their perceptions of the paintings changed, a moment that informs La Visita and other works.

La Visita is a build on previous Peeping Tom works, specifically Moeder (Mother), and transcribes the jolting experience of a perception shift onto the conceptual  framework of an art museum. In doing so, the idea of the museum is suddenly, unexpectedly, turned inside out; it’s unregarded human support systems of cleaners, security staff and indeed, visitors moving between foreground and background as our perception of their relationship with the artworks they coexist with flipping between serving them, and being served by them. It is an exploration of the very essence of museology and exhibition making that is, by the physicality skill of the company, rendered emotionally moving.

Four dancers lead the work and are supported by employees of the Collezione, the real security and cleaning teams, who weave in and out of the story with disarming naturalness. The role of an anguished young security guard,  perhaps embodying one view of the ownership of artworks shows the tragicomedy of an infatuation with an artwork beautifully, depicting a narrative encompassing the craving for complete ownership, the loss of balance that creates acts of immoral violence and the regret that follows.

A different perspective of the museum experience is delivered by a bourgeois visitor to the museum who, observed as much as the artworks on display by the audience of museum employees develops – or perhaps reveals – shockingly visceral evidence that she herself is an artwork. A hat tip to her artwork status comes from her costuming, an elegant cream outfit that references and updates the work that triggered the young security guard’s moral meltdown.

The horror of her revelation occurs in a gallery created to house an enormous sculpture by Claudio Parmigianni, a boat-like structure made of blackened wood entitled ‘Caspar David Friedrich’ referencing the Romantic German painter, which is suspended high above the gallery goer. Significantly, the gallery sits geographically at the heart of the Collezione in a space specially created to house the Parmigianni work, around which the collection unspools in chronological order. The character of the Visitor first notices a pool of black liquid,  ink or oil,  beneath the sculpture, but it appears that it is originating from more than one source.  Shockingly, she herself is leaking and as the liquid leaves her form, she crumples, her chic cream outfit and shoes smeared with black marks. Tenderly restored by the Collezione’s cleaning team, clad in new versions of the same clothing, her hair repinned, she once more takes the role of the visitor until crumpling when she is inadvertently unplugged from the mains by the Cleaner. She is last seen stilled, packed as if for archiving, unlocking questions of cause and effect.

A third perspective is delivered by a character who is perhaps a museum director, perhaps a curator. Tending to artworks in her care she nurses them tenderly as they seem to audibly cry. The role of authority in the museum is seen as maternal, single-minded, perhaps even slightly maddened by her protective urges.

The exploration of the emotional side of museology in La Visita is challenging to viewers who see themselves as engaged with culture, forcing a confrontation of sorts with their reasons for engagement, and their understanding of their own perceptions of art and the museum going experience. The sheer joy of the performances however leavens the weight of the concept, bringing with it moments of lightness and straight out comedy that make this an accessible and engaging piece that seems destined to live on within the canon. 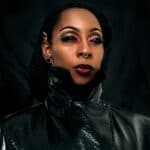