Kehinde Wiley’s Portrait of Melissa Thompson (2020) goes on display at the V&A alongside original William Morris designs that inspired it. - FAD Magazine
Skip to content

Today, the V&A announced that Portrait of Melissa Thompson, 2020, by American artist Kehinde Wiley is now on display in the museum’s William Morris Room (room 125) in the British Galleries, alongside William Morris’s Wild Tulip designs that inspired it.

The monumental two-metre oil painting was made as part of Wiley’s series The Yellow Wallpaper, first exhibited at the William Morris Gallery in Walthamstow in 2020 and was acquired by the V&A East team in June 2021. The portrait goes on display as part of a series of initiatives marking the 125th anniversary of William Morris’s death this October, including the new V&A and Thames & Hudson publication, William Morris, by Anna Mason, due for release on 21 October.

Wiley’s portrait depicts Melissa Thompson, a young woman the artist met at Ridley Road Market in Dalston, east London – a market first founded in the late 1880s and that remains a vibrant community hub today. Thompson, who lives in Ilford, but who grew up in Hackney, was with her mother and sister when Wiley approached her to feature in his new work.

“It was such a surreal moment when Kehinde Wiley approached me at Ridley Road Market and asked to take my portrait – I never thought I would end up in a museum! His work is so unique and powerful, it was a really lifechanging thing for me. I love this portrait – it captures a moment in time. Seeing it on the wall at the V&A feels really special – I can now see parts of my own culture and east London represented in a museum.”

Wiley’s Yellow Wallpaper series offers a visual response to American novelist Charlotte Perkins Gilman’s acclaimed 1892 feminist text, The Yellow Wallpaper. Gilman’s text is a semi-autobiographical tale that sees the narrator confined to her bedroom after being diagnosed with hysteria and explores the disastrous consequences that can come about by denying women independence. Wiley calls Gilman’s The Yellow Wallpaper ‘… a work of literary fiction that explores femininity and insanity by stepping upon the contours of what social decorum and societal mores are composed of. Madness becomes a metaphor for freedom and self-realisation.’ For these portraits, Wiley’s idea was ‘to use the language of the decorative to reconcile blackness, gender, and a beautiful and terrible past’, to position each of his female subjects ‘as autonomous, as powerful, as open to individual interpretation and as an emblem of strength within a society of complicated social networks.’  The portrait’s background features a repeating floral motif inspired by the wallpaper and textile designs of William Morris – an artist and designer long associated with and collected by the V&A.

Kehinde Wiley was born in 1977 in Los Angeles, USA and lives and works between New York, USA; Beijing, China and Dakar, Senegal. Widely known for his highly naturalistic portraiture set against intricately patterned backgrounds, Wiley’s approach to painting exquisitely subverts the visual conventions of historic European and American portraiture typically depicting the power and privilege of the royal and aristocratic. In Wiley’s work, his own subjects – African American and African-Diasporic men and women – predominantly encountered on the street in cities around the world are crafted with fastidious detail at a larger-than-life scale. Wiley’s portraits elevate his sitters, challenge perceptions of blackness, and raise important questions about race, identity and the politics of representation.

“Kehinde Wiley’s ‘Portrait of Melissa Thompson’ is a hugely powerful work, from the first series in which Wiley actively chose to feature exclusively female portraits. Recalling a style once used to predominantly depict European and aristocratic subjects, Wiley deftly distils a complex dialogue about race and identity in paint. This, combined with a sitter street cast in Dalston’s Ridley Road Market and a creative process deeply connected to east London, makes it a vitally important new acquisition for V&A East.”

The V&A’s William Morris collection is large and varied and reflective of Morris’s output as one of Britain’s most prolific 19th century artists, designers, social activists and authors. The collection – some of which will be housed at the forthcoming V&A East Storehouse – includes Morris’s most celebrated wallpaper and printed textile designs, including Strawberry Thief and Willow Bough, and his first attempt at a figurative tapestry, The Orchard, 1890, designed in collaboration with John Henry Dearle. The V&A collections also include other insights into Morris and his collaborators’ creative practice, including ceramic tiles, stained glass, floor coverings, embroidery and furniture, examples of his publishing design for Kelmscott Press, as well as several illustrated manuscripts.

One of the UK’s most significant new museum projects, V&A East celebrates global creativity and builds on the V&A’s long-standing heritage in east London and founding mission to make the arts accessible to all. Currently under construction in Stratford’s Queen Elizabeth Olympic Park, V&A East encompasses two sites – V&A East Storehouse at Here East, housing over 250,000 objects, 1,000 archives and 350,000 books from the V&A collections, and V&A East Museum on Stratford Waterfront, opening in 2024 and 2025 respectively. 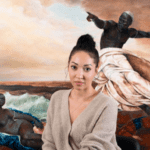