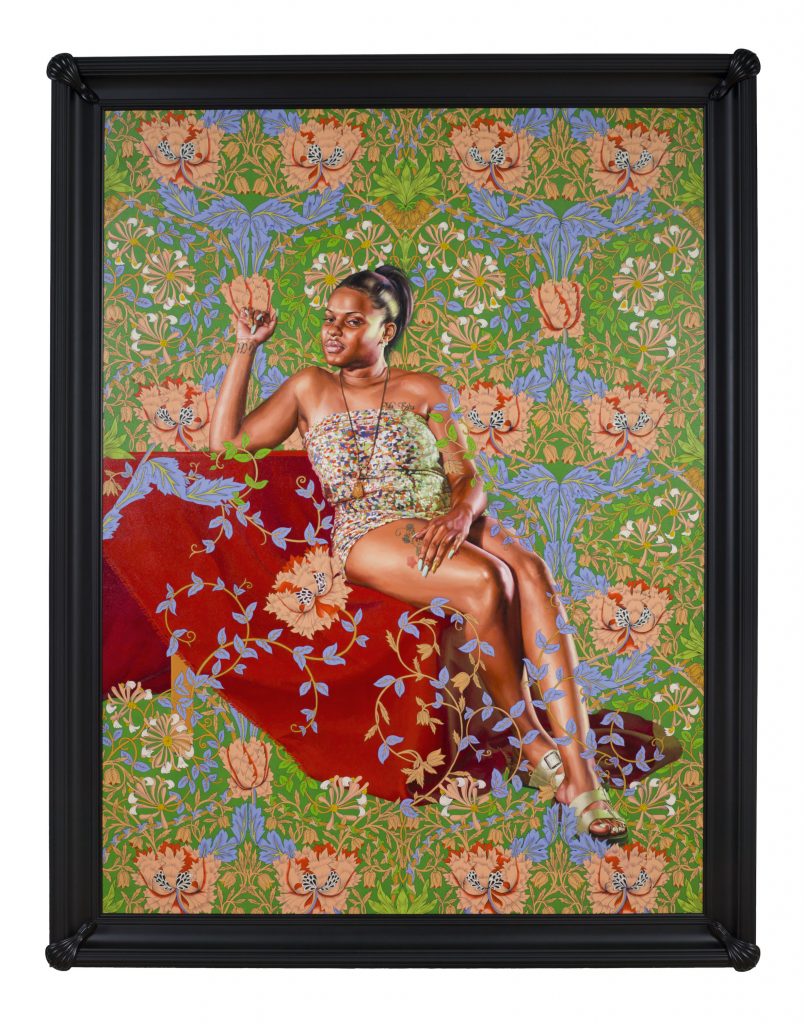 The Yellow Wallpaper is an exhibition of new portraits by American artist Kehinde Wiley (b.1977, Los Angeles) opening at The William Morris Gallery in February 2020. This will be the first solo exhibition of new work shown by Wiley at a public institution in the UK and also the first to feature exclusively female portraits. The works offer a visual response to American novelist Charlotte Perkins Gilman’s acclaimed feminist text, The Yellow Wallpaper (1892).

‘The Yellow Wallpaper is a work of literary fiction that explores the contours of femininity and insanity. This exhibition seeks to use the language of the decorative to reconcile blackness, gender, and a beautiful and terrible past.’

Gilman’s text is a semi-autobiographical tale which sees her narrator confined to her bedroom after being diagnosed with hysteria and explores the disastrous consequences of denying women independence. Wiley’s new portraits feature women that the artist met on the streets of Dalston, East London, each positioned as autonomous, as powerful, as open to individual interpretation and as an emblem of strength within a society of complicated social networks. They wholly embody myriad positions with regard to social class, status, religion, colonialism and the negotiation of gender.

For over fifteen years Wiley has sourced William Morris’s iconic floral designs for his paintings. Building on his interest in the relationship between the human body and the decorative, Wiley’s models are depicted in reimagined fields inspired by the William Morris oeuvre. Wiley’s portraits offer a rubric through which to engage with the beautiful yet fraught histories and traditions that black women — and all women — are heir to.

Gilman’s The Yellow Wallpaper holds a strong, personal connection to William Morris and the Gallery. William Morris’s daughter, May Morris, herself an accomplished designer, struck up a friendship with Gilman in July 1896 when they first met at an International Socialist Conference in London. That autumn, May Morris invited Gilman to give a lecture at her family home Kelmscott House, Hammersmith. A month later William Morris died and Gilman sent a moving letter of sympathy, which was a rousing call to arms: ‘Do you love to do – to DO and especially to make? With that, and the freedom to exercise it, life has no terrors’.

About the artist
Kehinde Wiley was born in 1977 in Los Angeles. He currently lives and works between New York, Beijing, and Dakar. At the core of Wiley’s practice is an analysis of the intersecting points between cultural and aesthetic values and existing historical narratives. In this charged moment, these discourses reveal how relations of power produce, sustain, and reinforce particular interpretations of transcultural exchanges and subject positions.

In 2018 Wiley became the first African-American artist to paint an official U.S. Presidential portrait for the Smithsonian National Portrait Gallery. Former U.S. President Barack Obama selected him for this honour.

Wiley has had solo exhibitions at institutions across the United States and Europe including: Brooklyn Museum, New York; Bozar Centre for Fine Arts, Brussels; Modern Art Museum of Fort Worth, Texas; the Petit Palais, Paris; Saint Louis Museum of Art, Missouri; and Seattle Art Museum, Washington. His works are included in the collections of numerous public institutions around the world. Wiley is the Founder and President of Black Rock Senegal, a non-profit artist-in-residence programme located in Dakar, Senegal.