Opening this October in a 67,000 sqft industrial space The Factory Project promises to be one of the highlights of Frieze week. Over the coming weeks, FAD is talking to all ten curatorial teams taking part in the museum scale exhibition. Below we have SKIP Gallery.

With SKIP Gallery, even though we both have very different opinions and approaches, the common ground between Catherine and I as curators is humour and rebellion. Back in 2016,  when no one wanted to know us as artists, and we couldn’t break into the art world for blood nor money, we decided to do a one-off ‘fuck you’ interventionist artwork outside Frieze, by dropping a skip near Regents Park. In such a creative capital there are actually surprisingly few opportunities for emerging artists to show their work in an impactful way, and we wanted to generate space where there is none. Skips being ubiquitous, prefabricated vessels are robust and practical, but are also imbued with associations of mundanity, disposal and human proliferation. They’re an overlooked reminder of our throw-away culture, which is a  very poignant subject at the moment and let’s face it, there’s a playfully profound irony to exhibiting artwork in a skip. We wanted to create shows that were witty, challenging, and right there on the street for people to see, rather than having to walk through the hallowed and often expensive doors of museums and elitist galleries. Also, in order to have complete curatorial freedom, we’re self-funded. Imagine trying to explain a group show called ‘BUMs’  to The Arts Council, who, we think have managed to turn artists into bureaucrats, with the best-educated and ‘in the know’ having the upper hand. So, we search out like-minded artists,  and it’s been a lot of fun over the last 4 years or so. And even though we never made it to that parking spot outside Frieze, we’ve had 15 skip shows, with all kinds of artists from up and coming in desperate need of space, to established artists who have been wonderfully supportive. Recently we’ve even had a sign that things are edging full circle, when Sarah  Maple’s skip artwork ‘The World As We Know It’ was shown at the entrance to Art  Rotterdam, the biggest art fair in the Netherlands, so one day our crazy SKIP Gallery will hopefully be invited to sit at the entrance of Frieze – with a wry grin on its face.

Can you tell us a bit about the exhibition you will be presenting at The Factory  Project?

We are so chuffed to be invited by Thorp Stavri to exhibit at The Factory project. Apart from looking forward to showing alongside such fantastic, respected galleries, it’s a perfect environment for our skips to live in. In the past, we’ve shown one-off skips in the street, and multiple skip shows inside warehouse spaces, but The Factory show is a brilliant opportunity to create an uninterrupted skip pathway from outside in the courtyard to the factory itself. A journey featuring a survey of some of the most exciting artists working in Europe today.

Under the title ‘Like It or Lump It (part 2)’ we will be showing 12 skips, including existing artworks by David Shrigley, Sarah Maple, Maja Djordjevic, Baker & Borowski and Hayden Kays, but also new commissions by an array of talented outliers who use humour to speak truths about society and human existence. Lucy Gregory, Michael Johansson, Ally  Rosenberg, Dion Kitson, Holly & Faith, Max Siedentopf, Gary Mansfield, Xu Yang and Esther Gamsu.

How do you feel about the hijack of the word curator by editors, stylists, DJs, z list celebs, a-list celebs, tv personalities & influencers?

Lee – To be honest, until you asked, I hadn’t thought about it. But, the word ‘curate’ does have cultural collateral. It’s the kind of word that’s dropped at dinner parties to signpost intelligence. Language is ever-evolving and words are appropriated, absorbed and regurgitated, in this case as a shorthand for ‘I’m really clever for grouping these pre-existing things together, handing them back to you and taking the credit’. We live in an age where everyone is desperately trying to improve their personal brand and the word ‘curate’ is an assist.

Catherine – I can imagine that the overuse of the word ‘curator’ understandably gets right up the noses of real curators who have studied and gained degrees and MA’s in the subject,  but as a self-appointed curator myself (who doesn’t have a qualification in curation etc) I  feel that after doing 15 SKIP shows we’ve earned the right to use that word. I do quite enjoy seeing the word being liberally spaffed around, it makes me chuckle.

The Factory Project takes place in a very large IRL exhibition space. How do you envision your exhibition to be presented?

We need big spaces to show our SKIPs, and this is the perfect environment for them. For once, we’ll have a space that’s proportional to the work.

During COVID/ lockdown what have you been reading, watching, listening to

Lee – My other job is as a music composer for television, and I’ve been curating (haha) a  personal music playlist for the last few years, which is simply called The Best of The Best,  which has been specifically designed to keep me happy and motivated. It’s the most ridiculously eclectic array of tunes, but the only prerequisite is that I have to absolutely unequivocally love it. Tracks that I thought I liked, if they come on and I’m even slightly doubtful, they get immediately chucked out without any vacillation. It’s like some musical  Darwinian battleground. There’s currently about 2000 pieces of music and it’s constantly evolving.

Also, if you have 12 mins please watch / listen to this No Plan which is like the most incredible, moving, powerful documentary within a song. Breathtaking

Catherine – I’m obsessed with the news so have been reading all the newspapers that I can get my hands on. I’ve dived into some excellent telly – Succession, Halston, Lupin alongside watching lots of ‘how to train your cat videos’ – which haven’t worked on my teenage cats. My head is too scrambled to read books at the moment, I’ve got some great  titles lined up but just can’t concentrate

Have there been any positives for you from lockdown?

Lee – Ironically, given all the social distancing and isolation, I’ve got closer to my mum. My dad died just before lockdown and we’ve been in touch constantly – with my mum, that is…

2022 what do you have planned? & do you feel confident about the future?

For Baker & Borowski things feel very positive indeed. As Catherine likes to say, we seem to be making a success of a bin, which is rather mind-blowing. We recently had our first  ‘walled’ gallery show called BUMs with Dio Horia Gallery in Mykonos and it was featured in The Guardian. We also recently started a new public art project called Graphic Rewilding, which even though it is, in many ways, the antithesis of SKIP Gallery, it has its roots in a need to bring more art into the public realm. It’s going very well so far, and we’ve already created work for Kensington and Chelsea Art week as well as the new art trail at The Forest of Dean. However, I have to say that on a global level, we are definitely feeling extremely apprehensive. Everything seems to have a thin sheen of worry and ‘what have we bloody  done to the world?’ 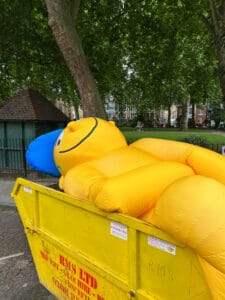 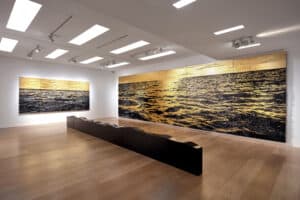 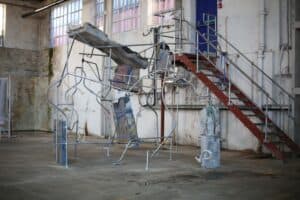 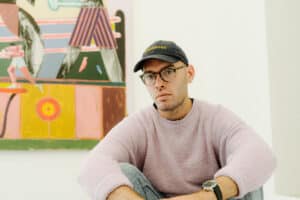