Honda Baiku is a self-balancing electric scooter standing on a single wheel. The vehicle uses gyroscope and accelerometers sensors to enable it to balance itself. The electric bike features a movable flat seat that can be retracted into the frame saving space while not in use.

The Honda Baiku’s rectangular-shaped front also includes an LED array of lights that provide a clear view during the night. The Honda Baik also features a long display that spans from the top section to the lower chassis. The top part reveals important information including speed, temperature, navigation, while the sloped section functions as a remote control for the user’s connected smartphone. 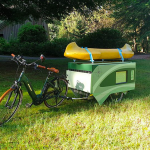 The all-new Scout Camper by CreaCon

We Love the all-new Scout Camper by CreaCon is a travelling solution for the solo traveller. 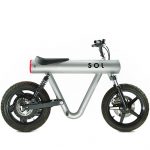 We love The Pocket Rocket an electric two-wheeler designed specifically for daily urban life. Created by Sol Motors a German company based in Stuttgart.