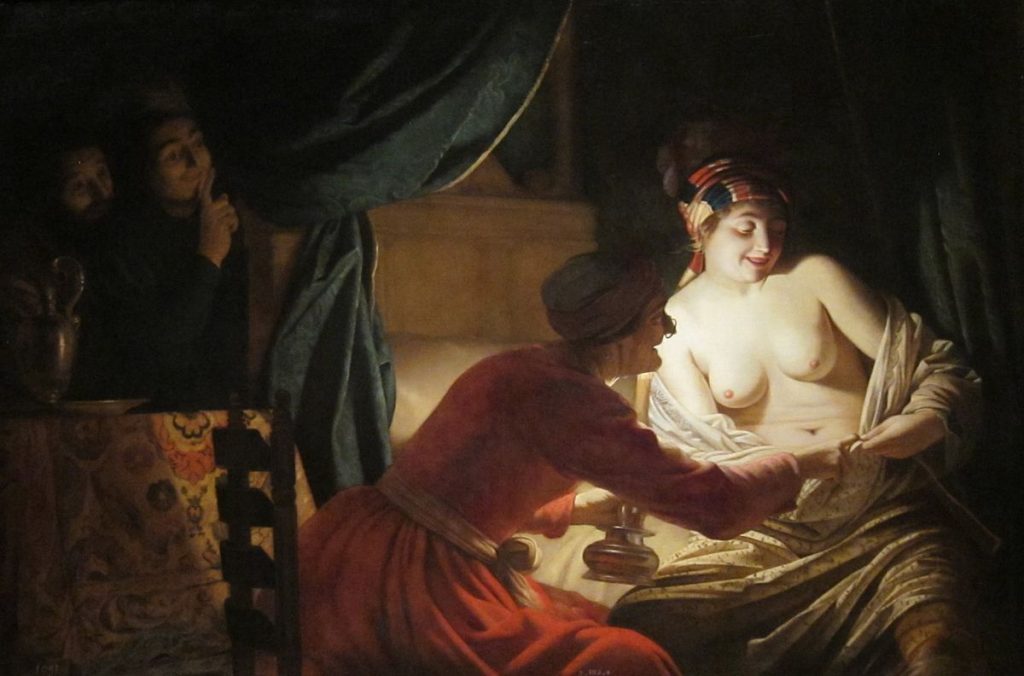 Want some consolation during the lockdown? Covid-19 is far from being as lethal as the bubonic plague which, for example, killed a quarter of London’s population in 1665-6. The plague’s main vector was the flea, which transferred it to carrier rats. Yet when the business of hunting for fleas made it into 17th century art, it tended to be for Eros, rather than Thanatos. Here are two examples, both by tenebrist followers of Caravaggio who are best-known for their skill in depicting candle-lit scenes: Gerard van Honthorst (Dutch, 1592 –1656) and Georges de La Tour (French, 1593-1652). Both allude to the long-standing use of the flea as a symbol for intimacy, in the context of the prevalent view that sex led to a mingling of bloods. That provided plenty of scope for nudge-nudge, as when John Donne wrote in the 1590’s: ‘It sucked me first, and now sucks thee, / And in this flea our two bloods mingled be’.

In Honthorst’s ‘The Flea Hunt’, 1621 (top) the well-lit breasts, assumed procuress, apparent enjoyment of the hunt, and presence of two potential customers as voyeurs make the parallels pretty clear.

De La Tour’s ‘Woman Catching a Flea’, 1630’s, is more sober and ambiguous. The burned-down candle, serious expression, less sexualised breasts and swollen belly might indicate the consequences of illicit sex. Moreover, the woman seems about to crush the flea between her thumbs, perhaps standing in for some other revenge she’d like to take.