House of Illustration will open the UK’s first public solo show dedicated to artist Tom of Finland on the centenary of his birth. - FAD Magazine
Skip to content

This year House of Illustration will open the UK’s first public solo show dedicated to gay cultural icon and prolific artist Tom of Finland (born Touko Laaksonen), in partnership with Tom of Finland Foundation and the Finnish Institute in London.

This timely exhibition, on the centenary of his birth, will celebrate the artist whose homoerotic visions had a profound effect on gay communities in Europe and North America during a pivotal period in their history and continue to have an immeasurable influence on popular culture today.

Tom of Finland: Love and Liberation will display 40 works on paper produced from the 1960s to the 1980s, both before and after homosexuality was decriminalised in much of Europe and the U.S. It will include early drawings of men fighting that constituted the only legal way to show physical contact between men before decriminalisation, as well as illustrations from his iconic Kake comics and rare linocuts produced in very limited editions.

“We are delighted to be showing Tom of Finland’s iconic and important work to the UK public, introducing audiences in London to Tom’s mastery of multiple mediums spanning his lengthy artistic career.”

Many of these works, on loan from the Los Angeles-based Tom of Finland Foundation, will be exhibited to the public for the first time.

An art director at an advertising agency by day, Tom of Finland (1920-1991) began drawing his homoerotic fantasies by night, first distributing them in U.S. bodybuilding magazines and signing them with the pseudonym ‘Tom’ to avoid censure and arrest. The general public had only to look at a ‘sports’ or ‘health’ magazine to see Tom of Finland’s sensuous hyper-masculine figures, while an underground audience could access his overt erotica via a network of sex shops and leather bars.

Tom’s drawings didn’t just present homoerotic scenes – they fetishized the uniforms of the military and law-enforcement establishment, subverting the image of these homophobic institutions in a direct challenge to the emasculating stereotypes and prejudices of the time. His unabashed and unapologetic depictions of homosexuality shaped gay identity, inspired LGBTQI rights campaigners and invigorated popular culture, influencing the aesthetics of artists as diverse as Freddie Mercury, Robert Mapplethorpe and John Paul Gaultier.

“Tom of Finland transformed his original perception of male sexuality and desire into a vital art that spoke to suppressed queer communities around the world and revolutionised the image of gay men in popular culture. Tom rejected the discrimination and conservative conventions of his time to celebrate love, intimacy and pleasure, and it’s no surprise that his message continues to resonate. We are extremely proud to present this overdue show of his work in the UK here at House of Illustration.”

On Friday 8th May 2020, Tom of Finland would have turned 100 years old… Join House of Illustration curator Olivia Ahmad at 6pm in a free 45-minute Zoom conversation with Durk Dehner, Co-Founder and President of the Tom of Finland Foundation in LA, to celebrate the 100th birthday of the legendary gay icon and homoerotic illustrator. 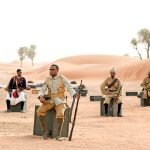 This week’s Top 5 Art Exhibitions to see in London include War, refugees, embassies, water, and snakes.