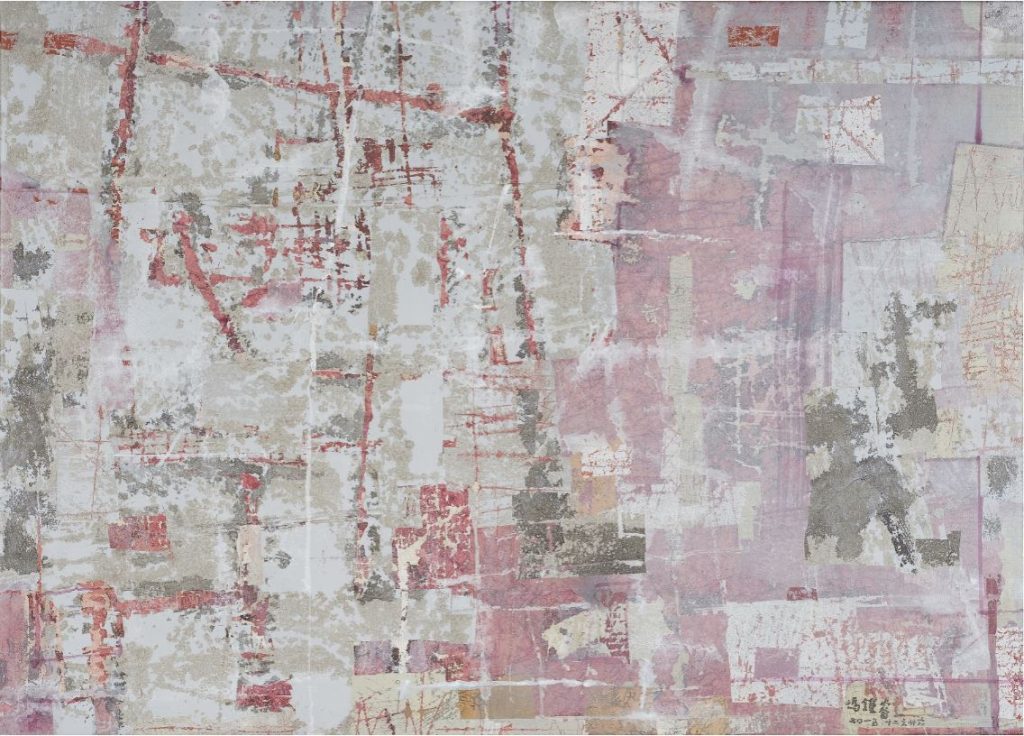 The western profile and marketability of contemporary Asian art has risen sharply in recent years, principally through the Japanese Gutai (‘concrete’) and Mona-ha (‘school of things’) and the Korean Dansaekhwa (‘monochrome painting’) schools, with their distinctive titles. They have developed through artists born in the 1920’s and 30’s, and tend towards abstraction. But what of China? Many of the comparable generation of Chinese artists relocated abroad, given that such work was frowned upon under Mao. Several of the most interesting relocated to Taiwan, where they formed the Fifth Moon Group in the late 50’s. The group embraced both the Chinese traditions in ink painting and the western influence made very present by the US occupation of Taiwan: their spirit was not rebellious, so much as accepting, reflected in art which seeks harmony. They were, then, equally aware of American Abstract Expressionism, European Tachisme and the abstract aspects of the long tradition of Chinese art – such in calligraphy. Should they be as renowned as their Korean and Japanese counterparts?

A partial answer can be formulated from a substantial solo show at the Vazieux Gallery in Paris* of prominent Fifth Moon member Fong Chung-Ray.  He relocated to San Francisco in 1975, and has kept a low profile – sticking to the Chinese community and not speaking English – and is little known in America or Europe, his principal market being China. Chung-Ray remains prolific at 85. Indeed, he may well have made his best work in the past decade.

Chung-Ray used oil – at the time a novel medium for a Chinese painter – in the 50’s, then switched to the longer established ink during the 60’s but applied with his own invention of a brush made from palm tree fibres: the gallery has some examples showing the lyrical yet slightly rough results of employing this technique on its own. Chung-Ray concentrated on acrylic in the 70’s, adding the innovations of gluing on collage elements in the 1980’s, and inscriptions in the 90’s. He has found a late style this century – on which the show concentrates – which synthesises all those elements. 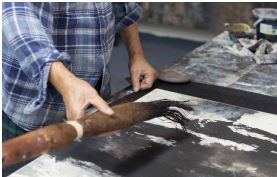 The result is complex all-over surfaces which can resemble by turns a map or aerial view; a wall, sometimes as if covered by the remnants of old posters; or an ancient manuscript. Some works feature palimpsestic writing which, while taken from canonical sutras, I am told make little more sense to Chinese readers than to me. They operate as semi-abstract components which evoke the atmosphere of spiritual and meditative contemplation to which Chung-Ray seeks to connect less explicitly in all his paintings. Visual interest is created at a detailed scale by the adhesion of some sections – evident only if you look carefully; and by the semi-controlled effects of different applications – oil, acrylic and ink – responding to each other as they dry. In particular, what looks like a geometrical craquelure develops in many passages: Chung-Ray achieves this by an elaborate process of painting colour onto a plastic sheet, scraping off the colour, painting black on top (so it seeps through the scratched marks), sticking that sheet to the painting and finally – once it is fully ‘cured’ – peeling it off to leave what he calls ‘crackling acrylic’. 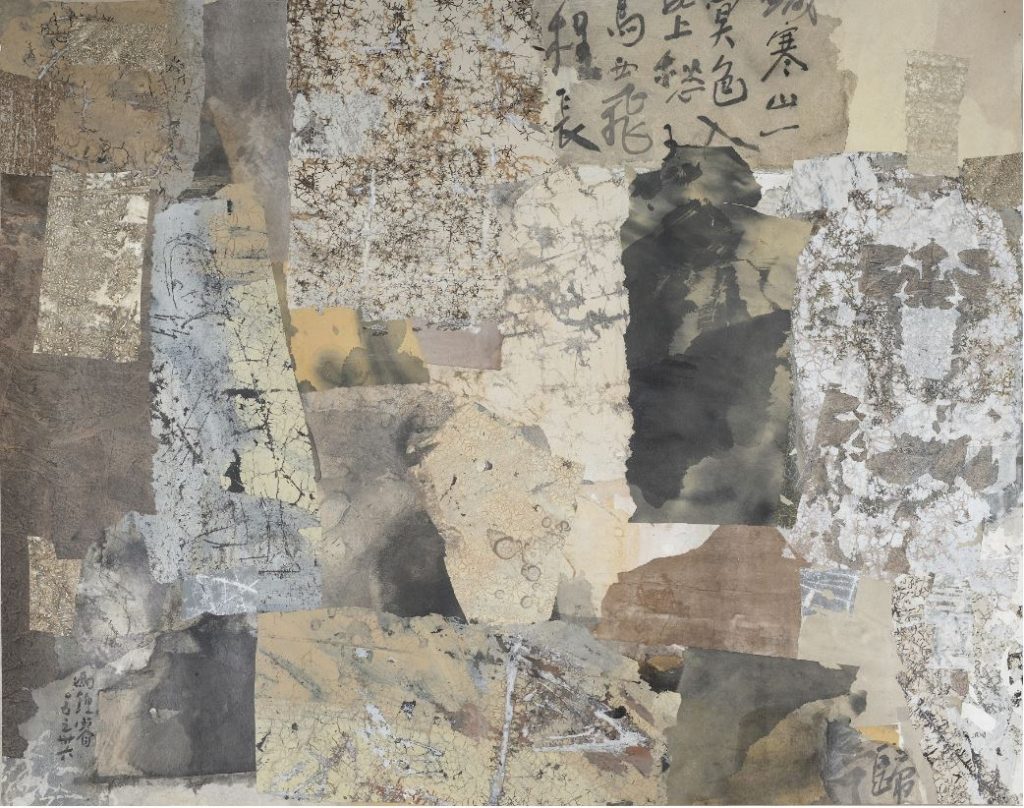 These recent works, blending calmly balanced overall composition with teeming visual incidents when you get close, made me think of a possible recipe for life: keep your bigger goals in mind as you deal with everyday vicissitudes. That combination of simple and complex, macro and micro, marks out Fong Chung-Ray’s late work as painting of some distinction. Whether – to return to my original, question – the same can be said of the overall output of the Chinese abstractionists of his generation is less clear. The helpful survey book ‘From China to Taiwan 1955-1985’** features 16 artists who fuse eastern and western techniques and thinking in various ways. I’m not convinced by them all, but Richard Lin and Hsiao Chin in particular also appeal to me. Who knows, given a catchy explanatory label – what’s the Chinese for ‘abstraction across the sea’? – theirs may yet become the next Asian tendency to achieve wider recognition. 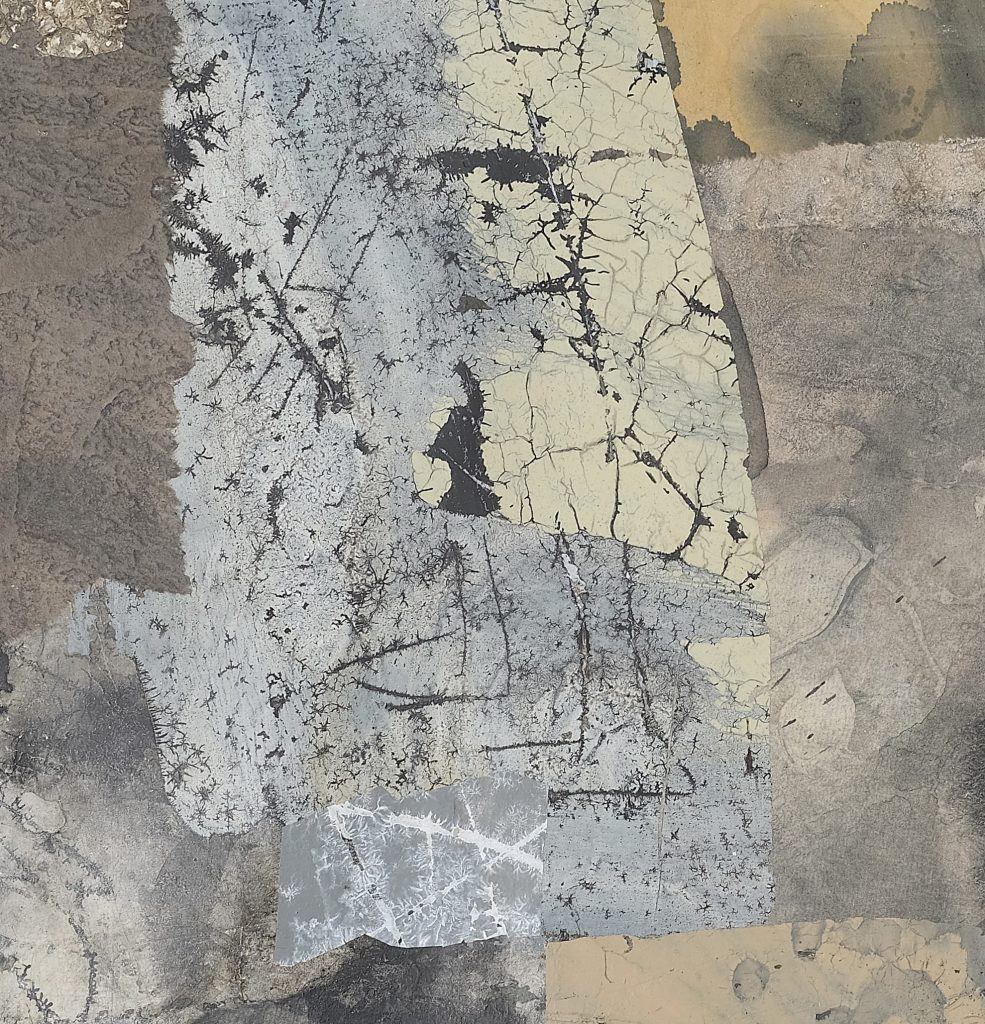