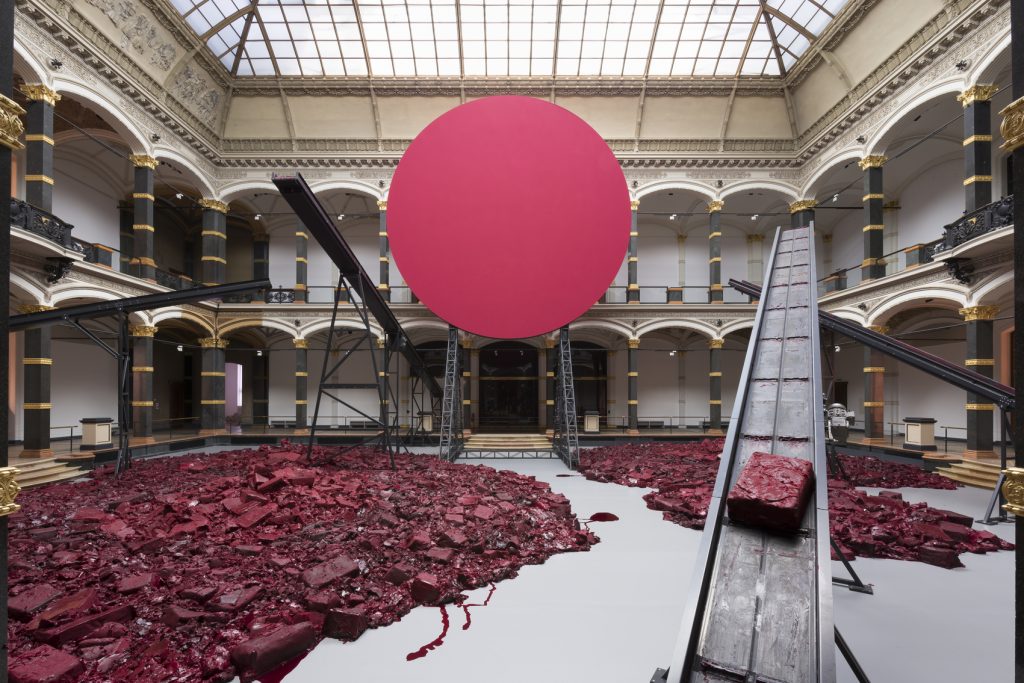 This November, celebrated British artist Anish Kapoor will open a major solo exhibition in Beijing at the Central Academy of Fine Arts (CAFA) Museum and Taimiao Art Museum of the Imperial Ancestral Temple, by the walls of the Forbidden City in Beijing. As Kapoor’s first solo museum show in China, the exhibition will present some of the artist’s most significant and celebrated works of his last thirty-five years – with powerful, self-generated installations at CAFA Art Museum and sensorial, geometrical sculptures at the Taimiao Art Museum of Imperial Ancestral Temple. 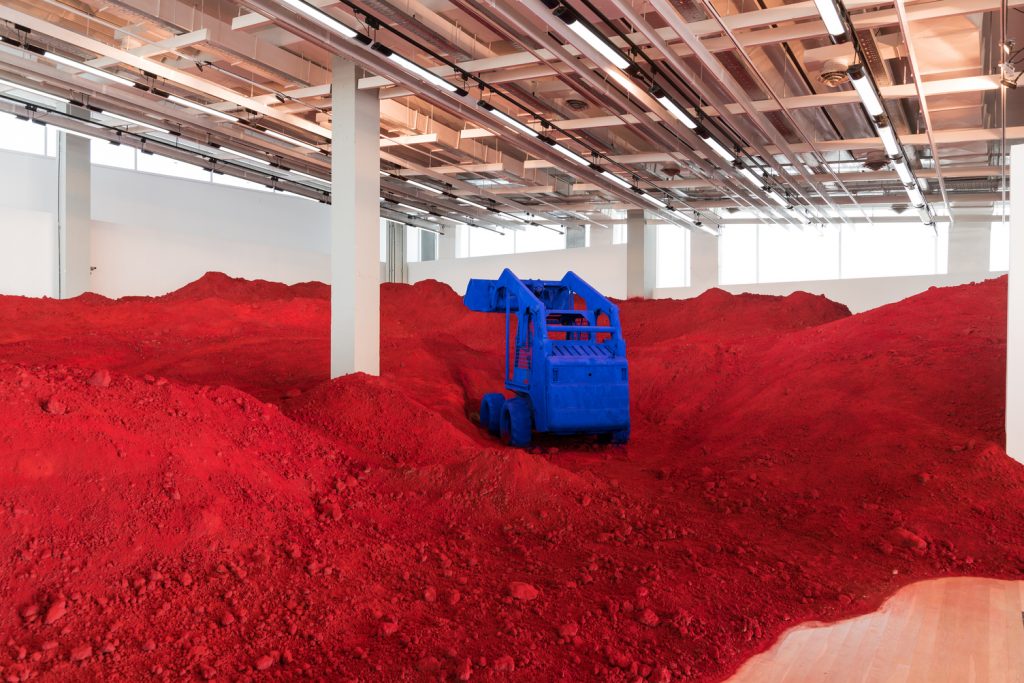 At the CAFA Art Museum, Kapoor will weave his monumental installations through the contemporary curvilinear exhibition spaces, presenting four performative artworks central to his recent practice. Symphony for a Beloved Sun (2013) will first greet visitors, transforming the central atrium of the museum into a landscape activated by a machine calmly processing masses of aggregating material. Previously exhibited at the Martin-Gropius-Bau, Berlin (2013) the work deposits bricks of red wax along several ascending conveyor belts, before dramatically plummeting into a molten heap of their own making. This system – watched over by a vast, red sun that hovers above the scene – takes place with no evident human interaction; the artist’s hand is replaced by a seemingly autonomous, invisible machine that allows the viewer an opportunity to commune directly with the mysterious entity, giving rise to a subjective, poignant experience. 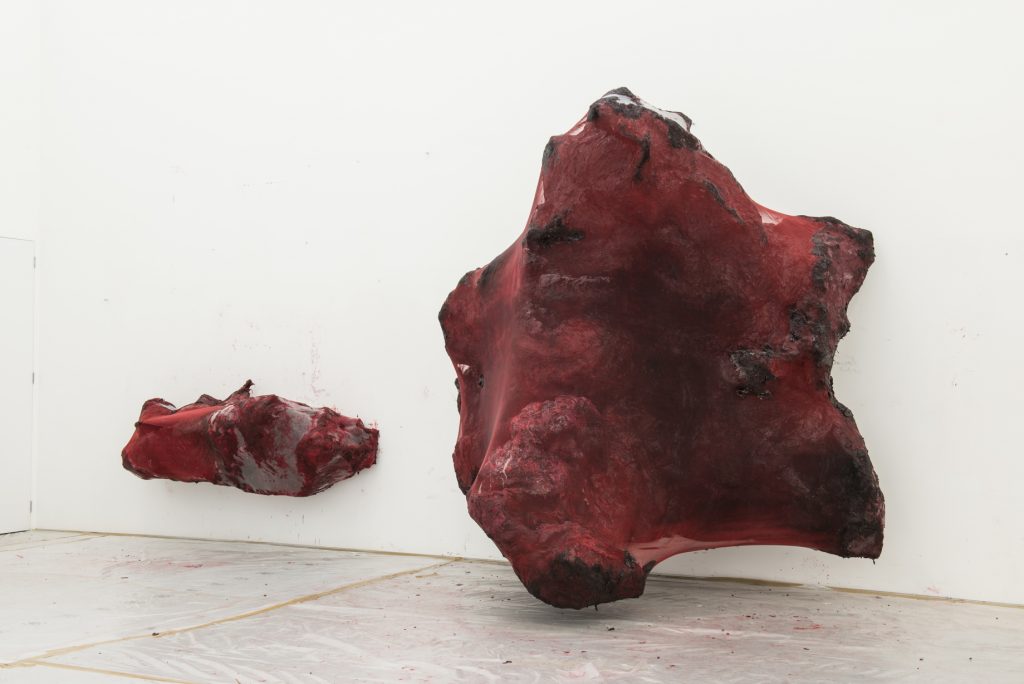 The second floor of the museum will house Kapoor’s Sectional Body preparing for Monadic Singularity (2015), initially created for the artist’s 2015 solo exhibition at the Château de Versailles, France. This ambitious construction explores the relationship between the interior and exterior, not only of the work, but of the body and the space itself. As well as experiencing its mesmerising biomorphic form, Kapoor invites the viewer inside the structure through an inconspicuous door, opening into a network of glowing red orifices, intravenously connected, conjuring powerful metaphors about the body, existence and spirituality. Alongside this on the second floor, an entire corner of the museum will be reconfigured into an industrial landscape entitled Destierro (2017), denoting ‘exile’ in Spanish. Only once exhibited before, at Argentina’s Parque de la Memoria, Destierro encompasses hundreds of tons of earth sprayed with red pigment contrasted by a solitary, ultramarine-blue digger, battling against the tides of detritus.

On the third floor of the museum, Kapoor will present My Red Homeland (2003), another large-scale, self-generating installation. Here, a metal blade is mechanically driven around an open circular container filled with 25 tons of molten red wax. Over the course of an hour, the blade slowly orbits the deep-red matter, appearing as if to churn, form and reform the wax. 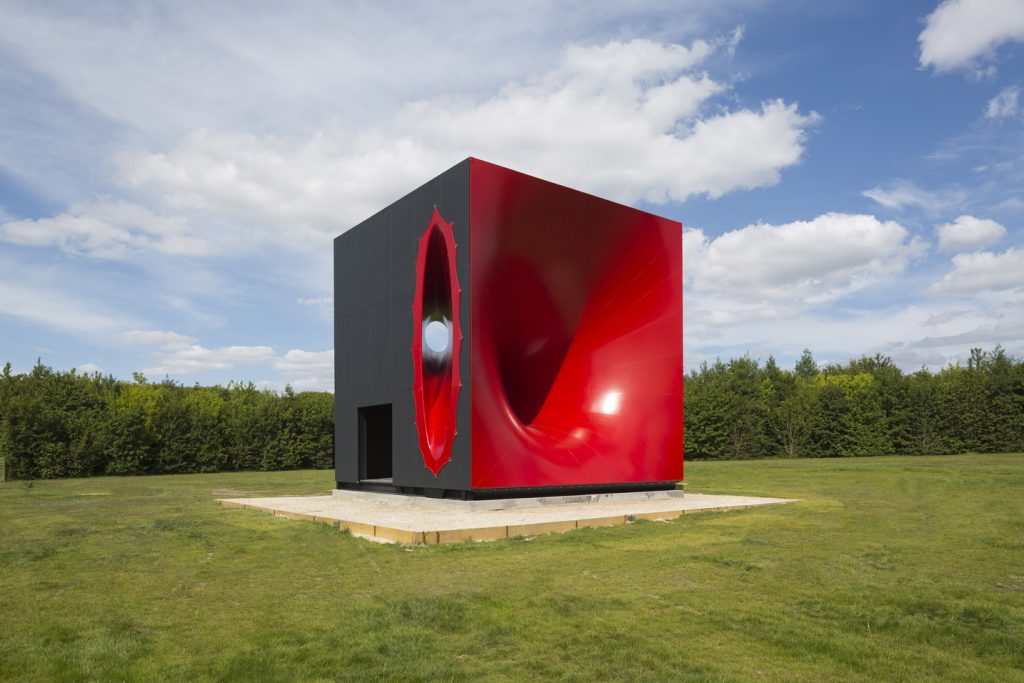 Alongside these large-scale installations at CAFA Art Museum, Kapoor will present a display of architectural scale models from his practice over the past few decades, including models for the significant publicly-realized projects, Cloud Gate (2004), Orbit (2010), Southbank Centre (2001), Subway Station, Monte San Angelo, Naples (1999-2002) and Leonard Street Model (2009).

The exhibition will continue across Beijing at the Taimiao Art Museum of Imperial Ancestral Temple, the largest ancient palatial structure in the world. Kapoor will address the architecture and spiritual history of the site, reflecting and engaging with the spaces through a series of stainless steel and pigment sculptures. The 600-year-old Temple sits within the Imperial City and just outside the walls of The Forbidden City. The central atrium of the building will present two of Kapoor’s mirrored steel works S-Curve (2006) and C-Curve (2007), which morph from concave to convex, bending and twisting their surroundings, turning the world upside down before restoring order and revealing a clear reflection of the visitors. Viewpoints are further shifted by a curated selection of Kapoor’s reflective stainless steel sculptures, including Stave (2013), Non-Object (Spire) (2008) and Non-Object (Door) (2008). Rather than simply reversing or mirroring their subjects, these works challenge viewers’ perceptions by absorbing or dissolving figurative imagery and the fabric of the building entirely, simultaneously denying bodily presence while suggesting an all-enveloping connection with the environment and each other.

Kapoor’s use of raw paint pigment – a material formed of pure colour that soaks up light and refutes the surface scrutiny allowed by his polished surfaces –was the foundation for a seminal series of pigment sculptures that will inhabit the two galleries flanking the central Temple. Indeed, the artist’s early rise to prominence stems from his innovative early pigment series 1000 Names, made between 1979-1982. The title refers to the 1000 names as an infinite series alluding to the metamorphic ability of colour to have material presence and illusory resonance. Alongside key works from this series will be the next generation of Kapoor’s pigmented sculptures, including the blue field of Angel (1990), and the multipartite, multicoloured To reflect an intimate part of the red (1981), emerging from the wall and floor, rendered in intense, alluring colours that deceive the eye through their forms and protrusions.

I am honoured to be making these two exhibitions in Beijing both in the context of CAFA and the temples of the Forbidden City. I have planned exhibitions that reach across my work of the last thirty-five years. 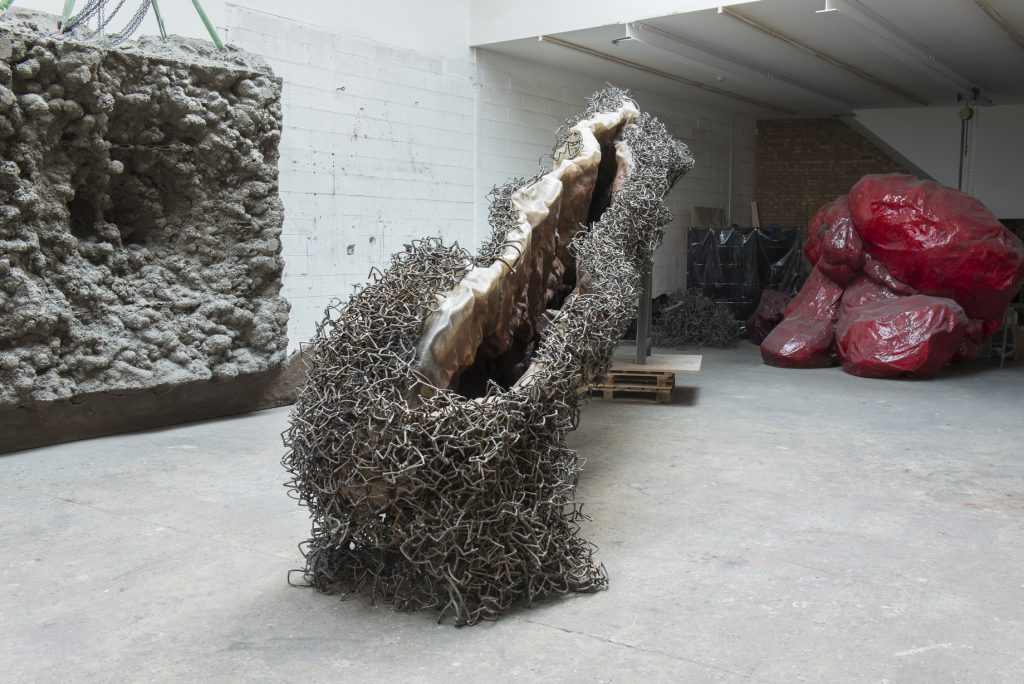 About the CAFA Art Museum, Central Academy of Fine Arts
The history of the CAFA Art Museum can be traced back to the early 1950s. Originally called the Central Academy of Fine Arts Gallery, the Gallery was the first professional university art museum built after the establishment of the People’s Republic of China. In 1998, the Gallery changed its name to the CAFA Art Museum. In October 2008, the museum’s new building was designed by the noted Pulitzer winner Japanese architect, Arata Isozaki. At the end of 2010, the CAFA Art Museum was selected to be one of the first to be listed as the Key National Museums. The CAFA Art Museum is a professional and international modern art museum that conducts academic research, presents exhibitions, restores artworks and provides art education. The museum upholds the philosophy of open-mindedness and is rooted in the concept of using knowledge to serve society. It aims to bridge the past and the future through presenting great artistic and cultural accomplishments of our humanity, and share the culture of our times with all quarters of society.

About the Taimiao Art Museum, Imperial Ancestral Temple
The Taimiao Art Museum of Imperial Ancestral Temple is a historic site and built just outside of the Forbidden City walls. Constructed in 1420, during the Ming Dynasty, it is China’s best-preserved imperial palace, and the largest ancient palatial structure in the world. During ancient festivals and ceremonies Chinese emperors worshipped within the Temple, thus making it one of the most sacred sites in Imperial Beijing. The Imperial Ancestral Temple is operated by Beijing Municipal Federation Trade Unions, Beijing Working People’s Cultural Palace and the CAFA. It is designed with multiple functions, including exhibition, collection, research, public education, domestic and international cultural and artistic exchange.

About Beijing ZONHOM Arts and Cultural Development
Beijing Zonhom Arts and Cultural Development Co Ltd. (ZONHOM) was founded in 2014 with a mission to promote the arts and creative industry as well as to establish new creative business models integrating arts, manufacturing and urban development in China. ZONHOM is highly focused on global resources integration. Working with local and international arts institutions including museums, galleries and arts foundations, ZONHOM provides comprehensive solutions for every aspect of the arts and creative industries to create high-quality art content at the intersection of art, tourism, urban renewal, and cross-cultural communications.