Juliana Cerqueira Leite just presented the catalogue for her exhibition Orogenesis, on at the Museo Archeologico Nazionale of Naples. The book, published by Trolley Books, is in the same format as Cerqueira Leite’s sketchbooks, containing crucial archival photos and many of the artist’s sketches. Find my interview with her at the end of the article. 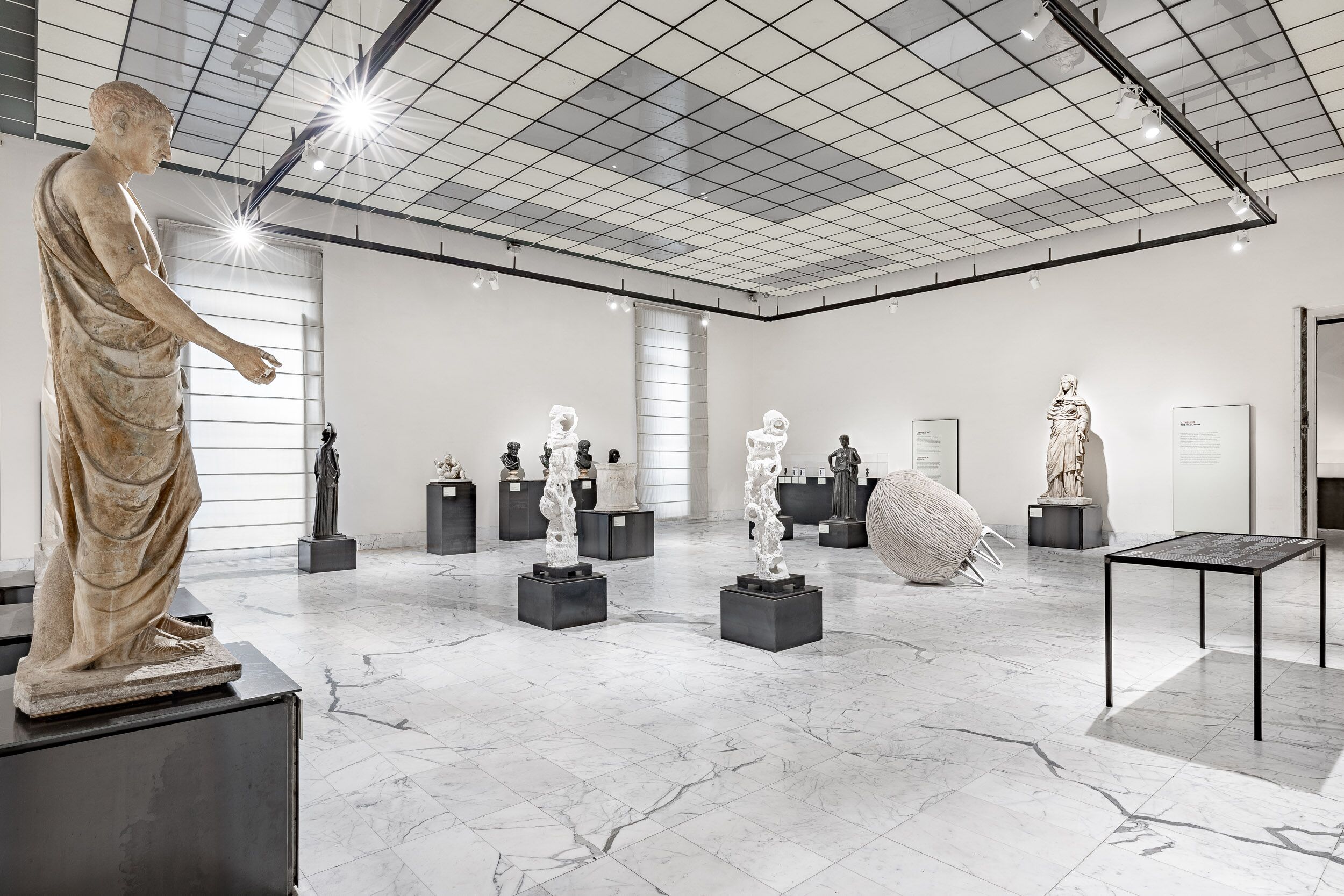 The exhibition is curated by Nadim Samman and Michele Iodice. The production of the artworks was made possible by a Pollock-Krasner Foundation Grant, and the exhibition is supported by the Juliana Cerqueira Leite Exhibition Circle, together with ALMA ZEVI. The exhibition is realised under the Matronato of Fondazione Donnaregina for Contemporary Arts.

Orogenesi is the culmination of two years of Cerqueira Leite’s research on Pompeii and the ‘calchi,’ the plaster cast bodies excavated in this world-famous archeological site. Cerqueira Leite’s sculptural works are indeed hosted alongside the finds uncovered from the Casa del Fauno, conserved in the iconic Villa dei Papiri rooms. Contemporary, 3D-printed, and taking shape from living “molds”, they enter into a piercing dialogue with the archeological collection of the museum. More specifically, they converse with the calchi from Pompeii, initiated by Giuseppe Fiorelli in 1863. The then director of the excavations poured liquid plaster onto the cavities left by decomposed bodies, obtaining a cast once the plaster had solidified. Interestingly, these bodies were found to be in a quite peculiar position—the “pugilistic attitude”, as it is known in forensic science. 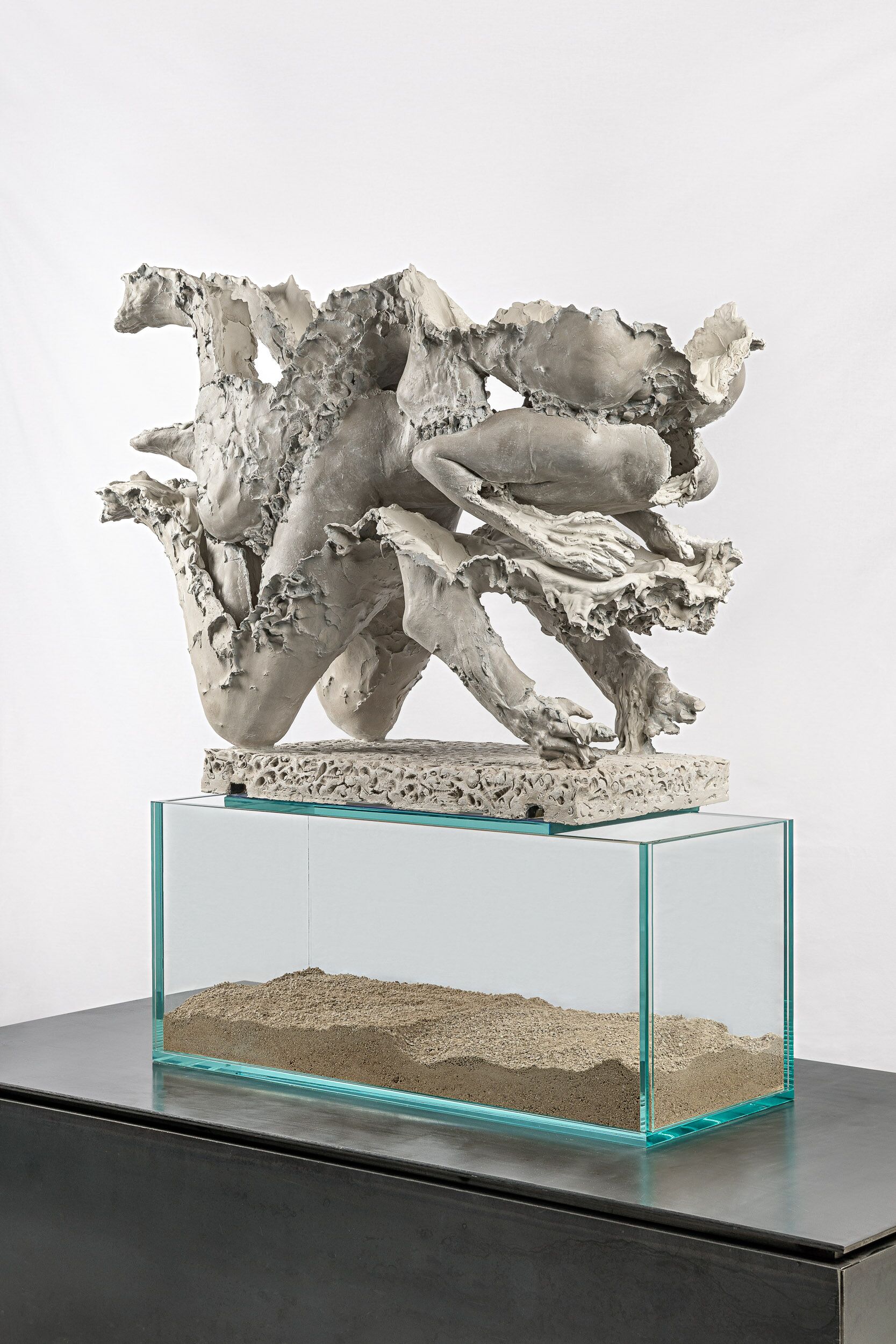 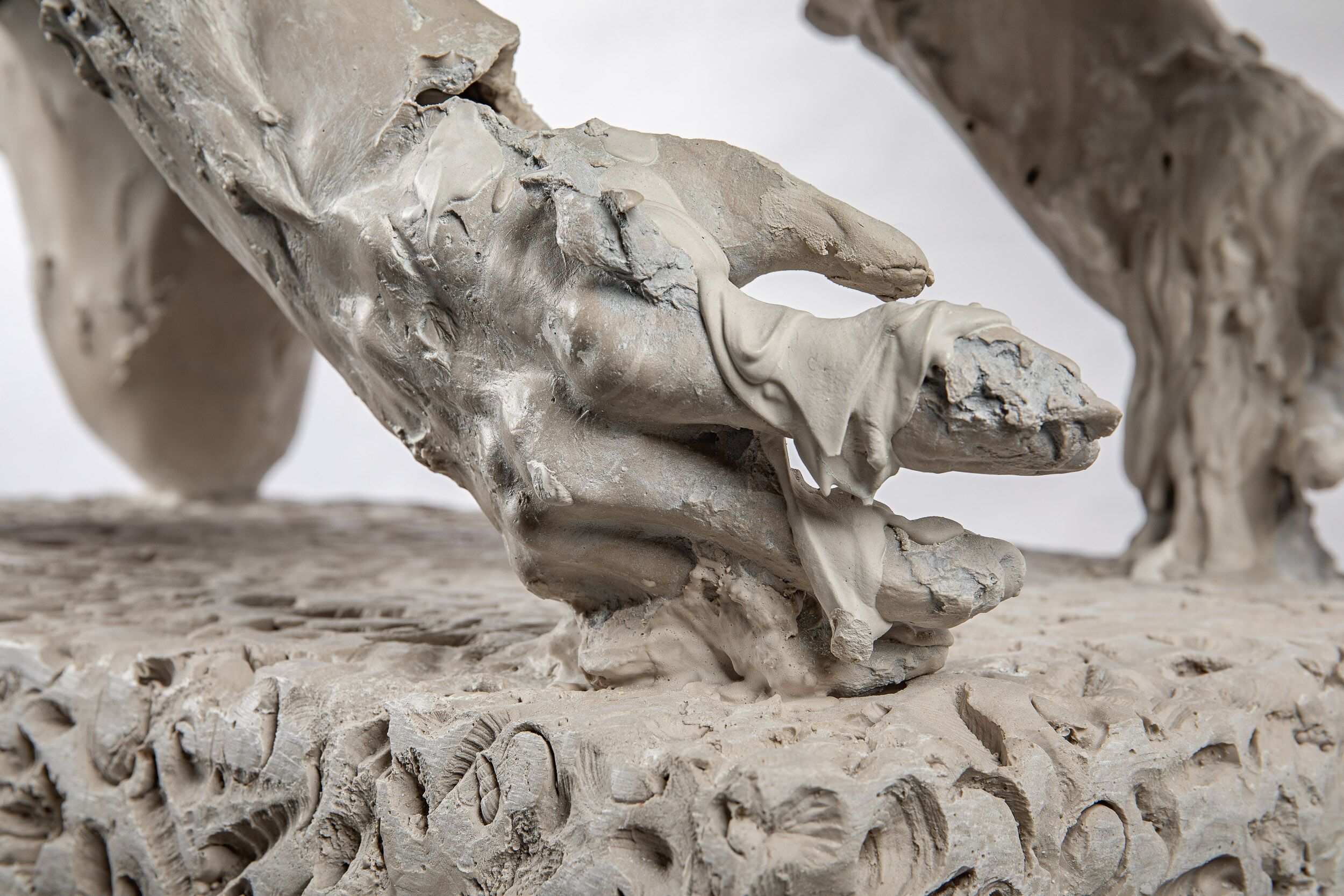 A work such as Calcify / Calcificare (2019) directly looks at the calchi. Yet it reinterprets them. Their solidified pose transmutes into a more dynamic complex; new materials also come into play. The body, from anonymous and decayed, becomes the intimate and alive one of the artist, consciously devolving itself to the project. The free-standing  piece, in fact, shows a triple-reproduction of the very (contracted, pugilistic) body of the artist, made from aquaresin, hydrocal, glass fiber, steel, clay, pigment, glass, sand. 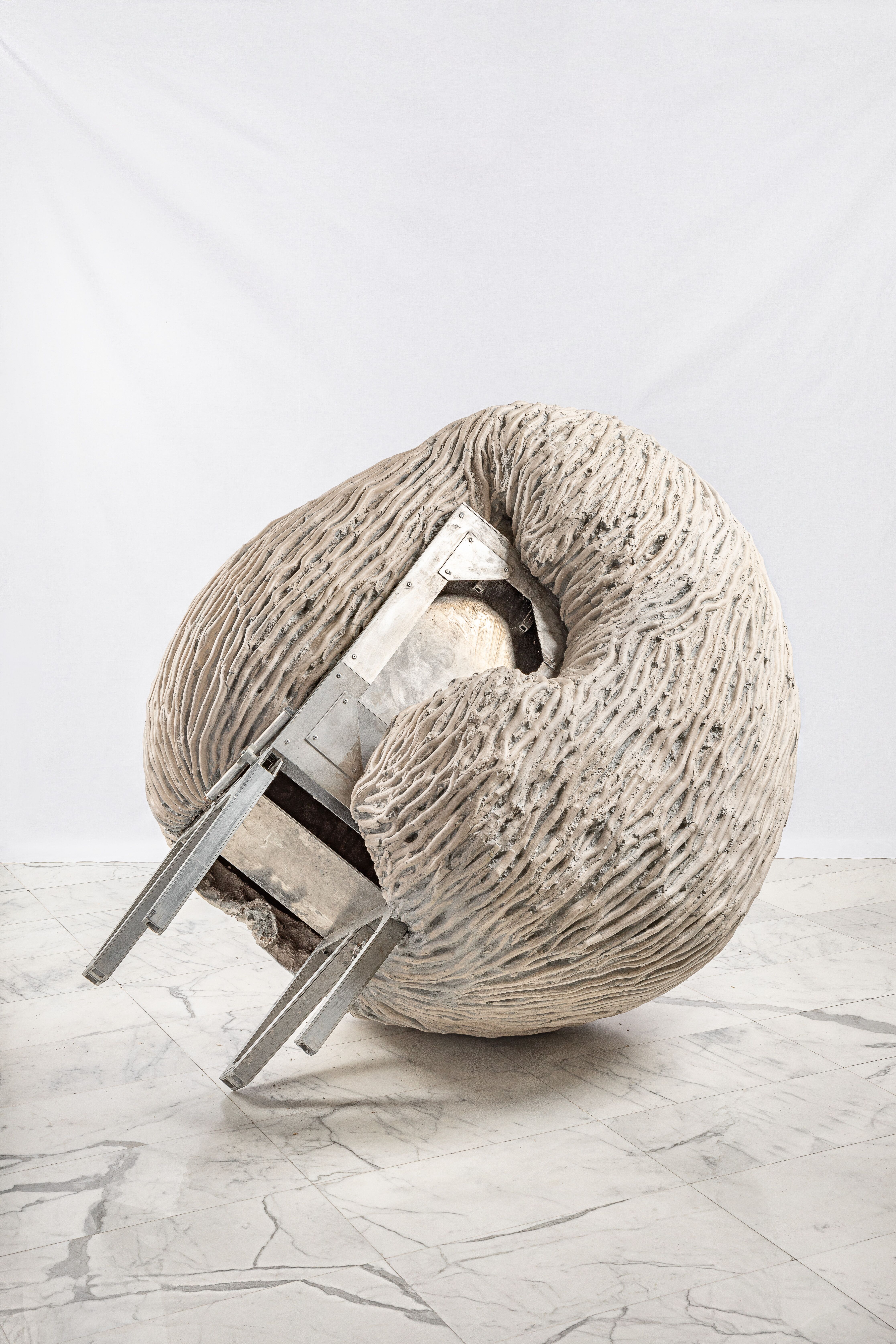 The artist’s investigations did not stop at these ancient excavations; already a demanding endeavour. It represented, instead, a remarkably wide-ranging research, extending from NASA’s manuals to Martha Graham’s choreographies. Cerqueira Leite, in fact, found the pugilistic pose to be reoccurring in all these disparate fields— archeology, space projects, and contemporary dance. 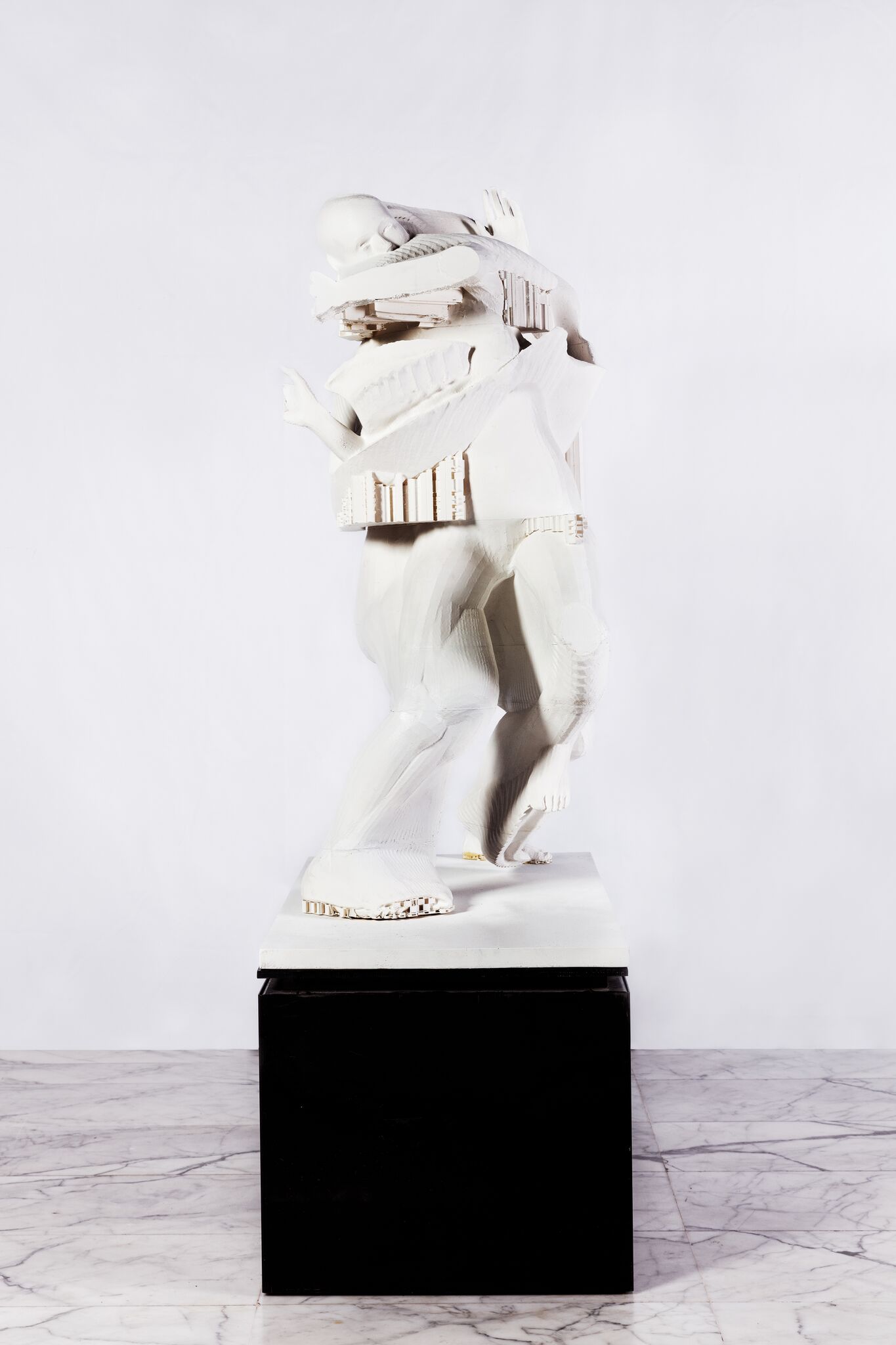 I met Juliana Cerqueira Leite in occasion of the launch of the exhibition’s catalogue Orogenesi. This was introduced by Hannah Watson (Trolley Books), and followed by a panel discussion between the artist, Dr. Sofia Gotti (Art Historian), and Michele Iodice (Curator of the show). Cerqueira Leite explored questions of feminism (“You— queer, woman…, find yourself not able to occupy space in the same way as others. You are forced to occupy a space that is not already taken up by others. Space must be a relation rather than a domination. Think about the colonising project that supports the missions on space! How can we feminise it? Creating relation instead of dominations”), and environmentalism (I don’t necessarily believe that the human species will be wiped out, but we will lose our culture and will need to mutate and re-build ourselves. I wanna create a futuristic humanism. I wanna offer new forms for new being that will navigate the space more positively. That’s why Pompeii is so relevant here, such an example of destruction by nature).

Here follows my interview with the artist:

Irene Machetti (IM): Starting from the calchi— plaster solidified inside the hole left by decomposed bodies— you became interested in their peculiar position, known as “the pugilistic attitude”. You noticed this pose (contracted back, bent legs, and flexed arms held up in front of the face) was reoccurring in two different contexts— NASA Neutral Body Posture, which the human body assumes in absence of gravity, and Martha Graham’s signature move, “the contraction”. How did you find out about these?

Juliana Cerqueira Leite (JCL): I have always been obsessed with Pompeii. The calchi were particularly important for me. Fiorelli casts showed me how to express the body from the negative. It widened the meaning and value of what I was doing. In my works, I usually work from inside of the material. I crawl into it and cast an index of my body from within. I think, in a way, working from inside of the materials is also an effect of being afraid of Pompeii. It is a reaction to what happened; to not being in control. Take the calchi, for instance. They are negatives; they are empty. Yet there’s still the skeleton inside, so they are basically cadavers. All this fragility was already in my mind.   I study dance, so I was very aware of Graham posture [the contraction]. Then, one day, a friend of mine suggested me to read the NASA’s Man-System Integration Standards (MSIS) [Manual published in 1986 for the development of space facilities]. There, I found the NBP [Neutral Body Posture: the pose that the human body assumes in microgravity. It looks incredibly similar to the position in which the fugitives from Pompeii were found], and I was like wow! This is crazy!

IM: How did you make the connection between aerospace, dance, and archeology?

JCL: It was quite spontaneous. It means nothing, I know, it is an arbitrary link. But I wanna allow myself to connect it all together. The pugilistic attitude, Graham’s “contraction”, and the NBP look remarkably alike.

IM: How does this connects to Orogenesis, the origin (‘genesis’) of mountains (‘oros’)?

JCL: Orogenesis relates to the geological creation of mountains; the formation of mountains and volcanoes that create because of the collision of forces and pressures. For me the term is not necessarily geological. It also has an expanded meaning, which I link to body and organs. It is also ‘orgon’— energy. The position we see in the show is established through pression and compression. An orogenesis acting on the body.

IM: I see the notion of body is central to your work. It is the body, dancing and reacting to psychological stimuli, that gives form to Species-specific / Specie-specifico (2019). It is the body, tied to a replica of NASA space shuttle chair, that defines the space around it, in Anthropometry / Antropometria (2019). It is the imprint of your body which is casted in Calcify / Calcificare. It is still a body that one represented holed and disjointed in Contraction 1 & 2 / Contrazione 1 & 2 (2019) and Contraction 3 / Contrazione 3 (2019). Can you tell us something about this?

JCL: As Sofia [Gotti] commented, the show [any show] has a component of archive; of choosing what to save from history and what to ‘forget’. Pompeian pugilistic attitutde, Graham’s “contraction”, and  NASA’s body floating in zero gravity (NBP) are all very similar. This repetition across time is in itself an archive. In this persistence of objects, shapes, and stories the meaning is lost, but the shape holds on. As a sculptor, I’m very interested in making things that will outlast me. I’m interested, in general, in seeing what’s persistent, what can be worthy of lasting for long. More specifically, what is ALLOWED to last. The human body is a persistent shape! We are persistent architectures.

IM: Looking at the works exhibited and talking with you, I sensed a feeling of absence and emptiness. The body, as we just discussed, is central to your creations. Yet, is never fully there, never really there. In Anthropometry, there’s a space on the back of the chair which is deprived from any sculptural attachment. Its’ an unreachable, unknown space. [The work was created by the artist enclosed in a mass of clay and strapped to a fac-simil NASA shuttle-chair. Performing the ‘grasp-reach’ experiment, she reached with her arms in all possible lengths and directions, sculpting the lines of movement she was creating.].  In the two Contractions there are holes and tunnels, which remind me of Graham’s saying how you “should have the feeling of air going through the holes in our bones”, as her collaborator Yuriko mentions in the catalogue. Anthropometry was realized with a 3D-printer, hence renouncing human manufacture. The calchi, moreover, are casts from negative spaces. Not to mention the involuntary nature of the pugilistic pose, assumed posthumously due to intense heat exposure.

JCL: And there’s the absence of control in the Pompeii disaster. Yes. There’s definitely absence. But it’s an absence being presence. This takes me back to feminism, to women, more specifically. Women not being represented, and being told what not to represent. There’s also the historical, highly problematic represenation of the feminine anatomy as a hole, as something missing, an absence. So working with my body as a negative index and leaving an impression of myself and my body is a way of turning emptiness into something concrete. I am leaving a trace, something durable. One of the tings I enjoy the most in my work is leaving an empty space for people to use. People seeing a trace and projecting themselves onto my body, that’s amazing. I make sculpture into an active, never-ending project! People don’t look at it and… that’s it. They walk into it, they try to fit the space. People try to fit into the sculpture, to find their space in somebody’s else creation. They take the space not occupied by others, they complete the sculpture. That’s also why I work from the inside. To leave an unknown space on the outside.