Tanning described her work as depicting “a confrontation between the forces of grown-up logic and the bottomless psyche of a child” in a 2005 interview with Jennifer Mundy. 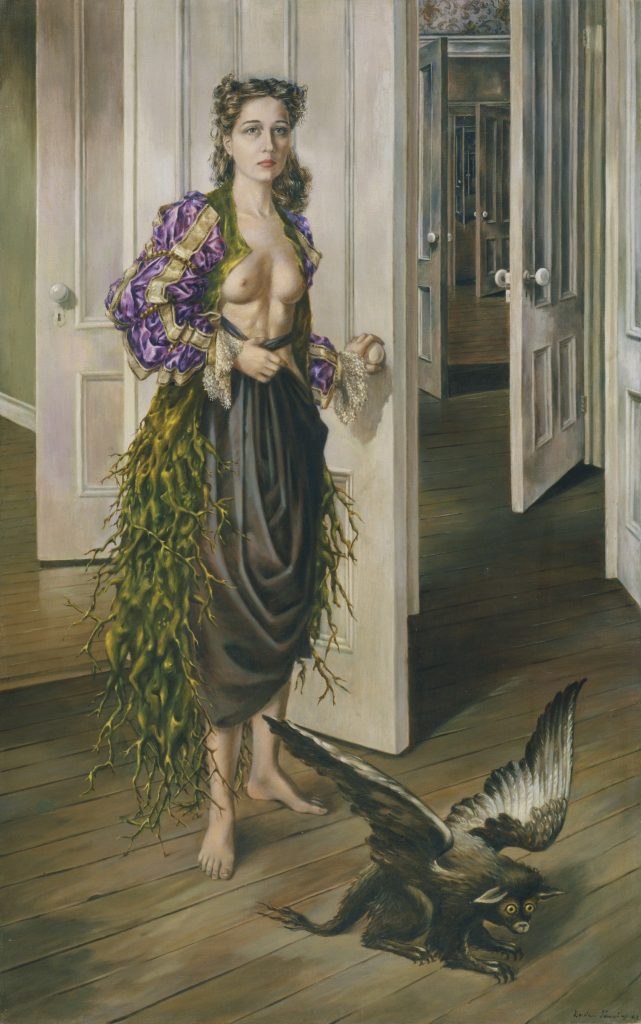 We can, as viewers, see this disturbing conflict between the “forces of grown-up logic and the bottomless psyche of a child” in the murky pallet and strange arrangement of Tanning’s work. The two long haired blonde girls in Tanning’s painting‘Children’s Games’ (1942) are reminiscent of illustrations of Alice-in-Wonderland. They wear frill-skirted, knee-length dresses and black ankle boots that have a Victorian style. The title creates a shocking contrast to the image of these wild haired young girls: the words ‘Children’s Games’ conjures in the mind an image of innocent fun, bright coloured toys and green open space under the sun. In dramatic contrast, the children in Tanning’s painting pull down the the grey walls on the long corridor that narrows drastically to reveal a distant blue sky and landscape far beyond. The tattered shreds of this wall fly out above their thank yo girls whose hands pull down a papery patch to reveal disturbingly sexual surfaces of flesh. The girl’s hair on the right is pulled up into an pink orifice that could be an anus, so that an illusion of fluid spurting out is disturbingly merged with that of the girl’s hair being sucked in. This play on sucking and spitting motions were perhaps intended by Tanning to reference Freud’s theory of a child’s psychosexual development from the oral to the anal stages. Tanning’s reference to Freud aligns her work with the Surrealist movement. 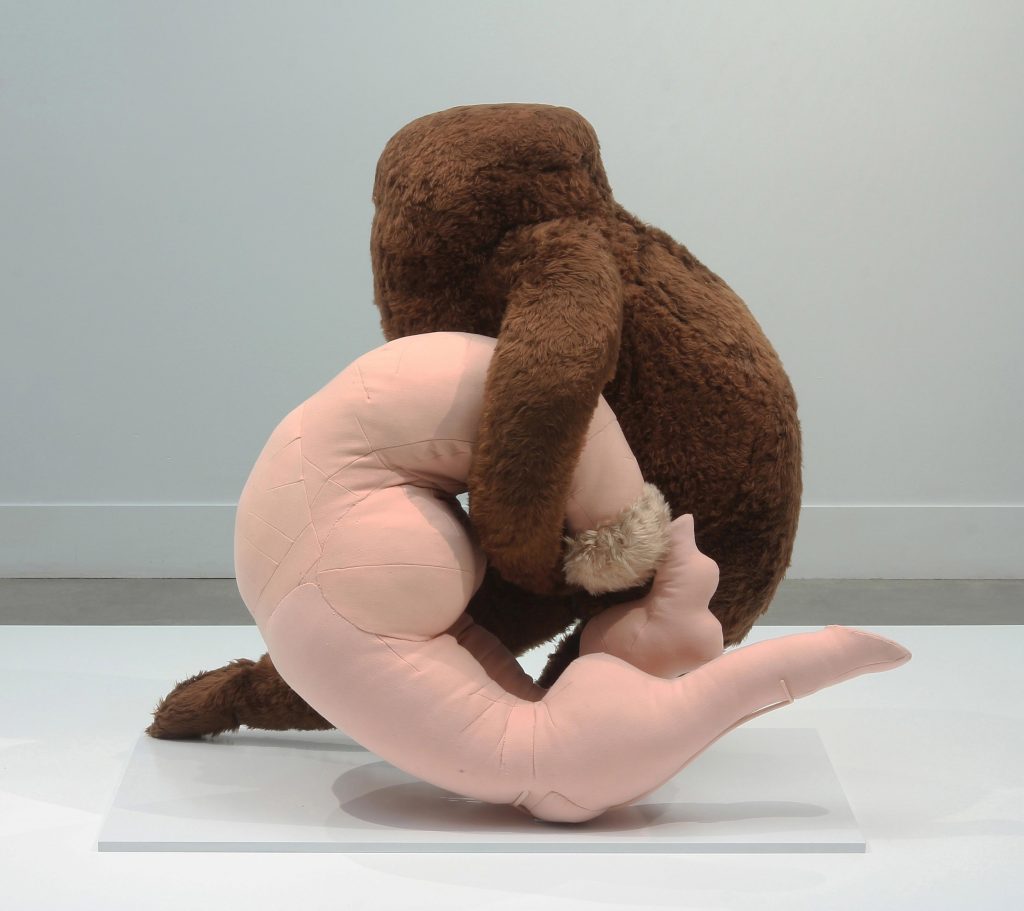 Perhaps this disturbing feeling of besmirched childish innocence was born from Tanning’s own coming of age conflict. Her iconic debut painting ‘Birthday’ (1942) is an explicit illustration of her own self-questioning. Her hesitant posture and blank expression intrigue the viewer in their extreme inexplicability. Tanning stands on the threshold of a room, holding the door handle on her left, and to her right a myriad of half open doors unfold into the distance. This tangle of half open doors can be read as a powerful metaphor for the many facets of the Self. Tanning’s portrait seems to shout out questions of uncertainty: “which way do I turn?”, “which door should I enter?”, and the ultimate, unanswerable question so many people would love to discover; “Who am I?”. This question was the foundation of Surrealism. The father of Surrealism, Andre Breton, begins his iconic story of chance encounter in ‘Nadja’ (1928) with this question: “Who am I?”.

While I wandered back through the gallery on my way out, I wondered what effect living and working in the shadow of the enigmatic artist, Max Ernst, who she married in 1946, had on Tanning as a woman and as an Artist. This shadow, I thought, can be seen to manifest in the murky colour-schemes of so many of her paintings. The contrast of bright yellow highlights on a dull grey-green background creates a confused and mournful air. Ernst clearly had an influence on Tanning and er work. This influence is most clearly seen in Ernst naming Tanning’s debut self-portrait, ‘Birthday’ 1942). However, the pair were happily married, living and working in their self-built house in Sedona, Arizona until Ernst’s death in 1976. The shift in style from this date is noticeable.

In contrast to the quivering, nervous stillness of her earlier works, such as ‘Self-Portrait’ (1944) in which Tanning is just visible standing on a cliff edge before a vast empty landscape, her later works contain a wild, frenzied movement. Does this suggest that Tanning has gained confidence in later life or does the extended, grappling limbs that fill her later canvases and seem to strain and shatter their surroundings, pushing beyond the thin frame of the canvas only illustrate her continued struggle for self-definition? Tanning’s later paintings such as, ‘On Avalon’ (1987), depicts a naked female form, striding towards the left with an arm lifted above her head, which is hidden under a large white cloud-like form. The striding nude seems to be bending under the weight of this formless white form. The monumental canvas is filled with large loose brushstrokes of green, white and dark blue that swirl threateningly around the striding legs and raised arm of the nude in the left corner. This human form is rendered in enough detail to be recognisable and grounds the abstract composition in the rest of the painting. The suggested narrative of this image can be found in the Ancient Greek myth of Atlas, the Titan who was condemned to hold up the world. However, Tanning has cleverly twisted this myth by giving the striding figure supporting the stormy forms of light and dark orbs a female form. Tanning was clearly well aware of the challenge she faced as a woman artist and the great efforts being made in the 1970-80s with the birth of Second and then Third Wave Feminism. 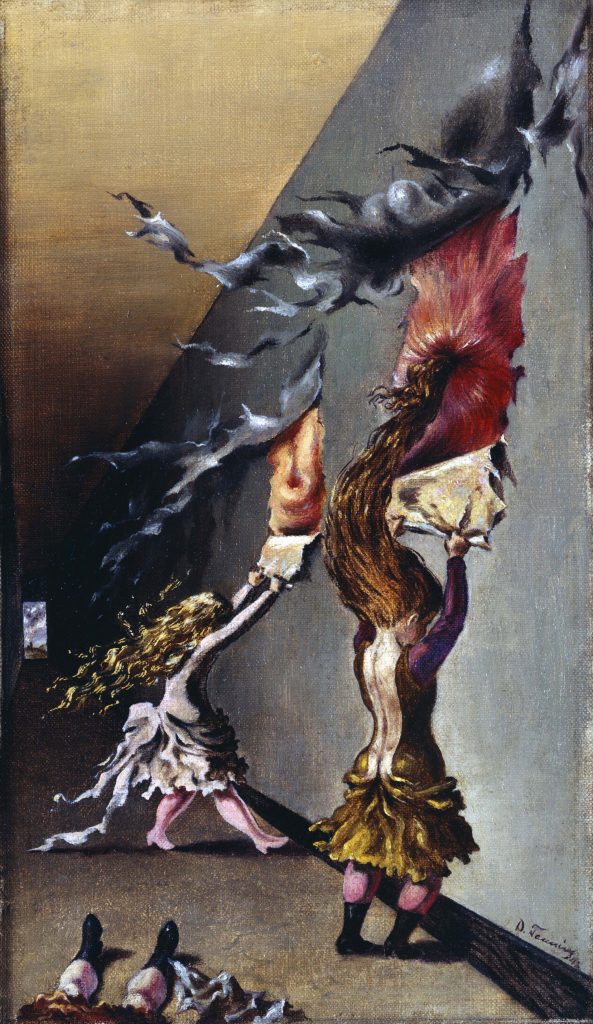 The Alice-in-Wonderland quality of Tanning’s work never vanishes completely, as the Tate’s retrospective shows. The last few rooms of the exhibition present Tanning’s phantom-like ‘Soft Sculptures’. These ‘Soft Sculptures’ are reminiscent of childhood soft toys, but they have been horribly distorted into a tangle of limbs. Throughout all of Tanning’s work, the earlier French Surrealist, George Bataille’s concept of ‘Informe’ (formlessness) is prominent. The concept celebrates the base material as a way to deconstruct the old hierarchies within art. The use of visual shapes as metaphors for conceptual forms is clearly visible in Tanning’s paintings ‘Children’s Games’ (1941) and ‘On Avalon’ (1987). These works stand as powerful images of self-doubt and self-questioning, the ambiguity of their compositions and the forms within create a feeling of uncertainty for the viewer. Tate’s retrospective shows that Tanning succeeded, again and again, in displaying a provocative “confrontation between the forces of grown-up logic and the bottomless psyche of a child”. 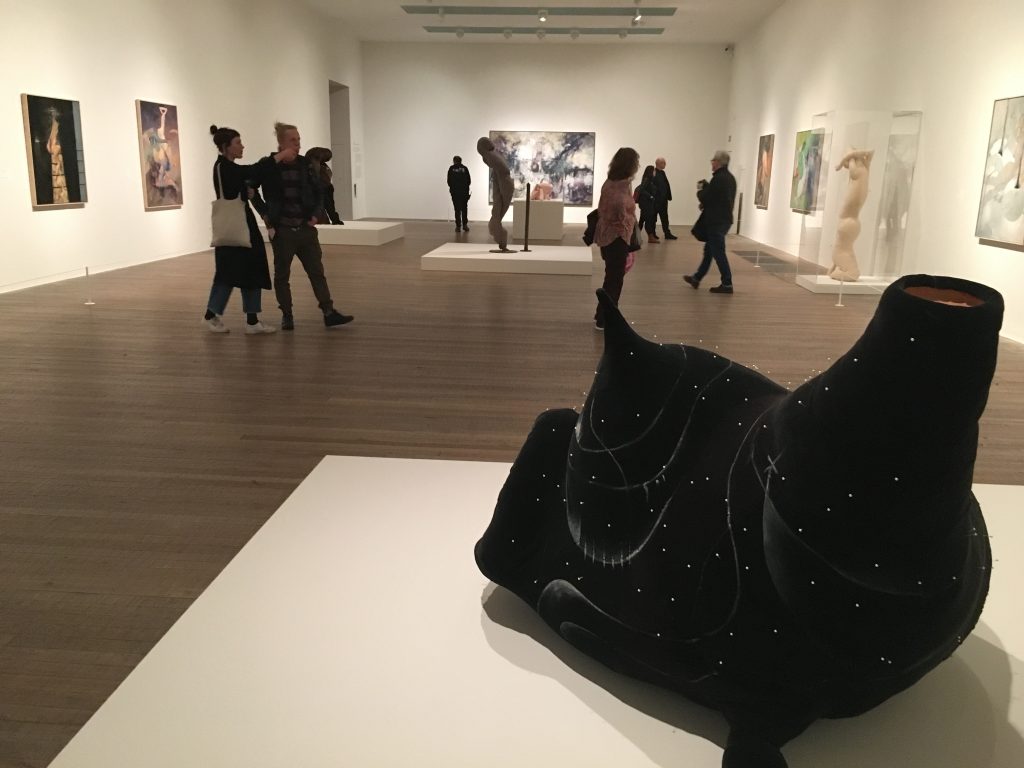 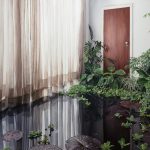 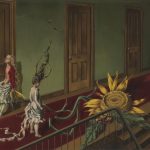 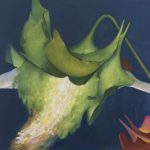 Proof, perhaps, that that being an artist isn’t a proper job is that you don’t normally get to retire. 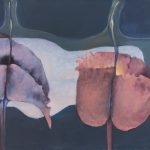 Alison Jacques Gallery is to exhibit Dorothea Tanning’s final paintings, which will be, shown together for the first time since 1999.