Los Angeles-based artist Keith Mayerson upcoming exhibition Heroes and Villain continues his career-spanning celebration of the public figures (both real and fictional) who shape America’s culture and consciousness, and their monuments to freedom. Though we are living in politically divisive times, and there is much recent evidence to the contrary, Mayerson’s ongoing project can be characterized as a hopeful representation of America as a generally progressive and morally good nation that moves, slowly and determinedly, toward greater inclusiveness, social justice, and peaceful coexistence. 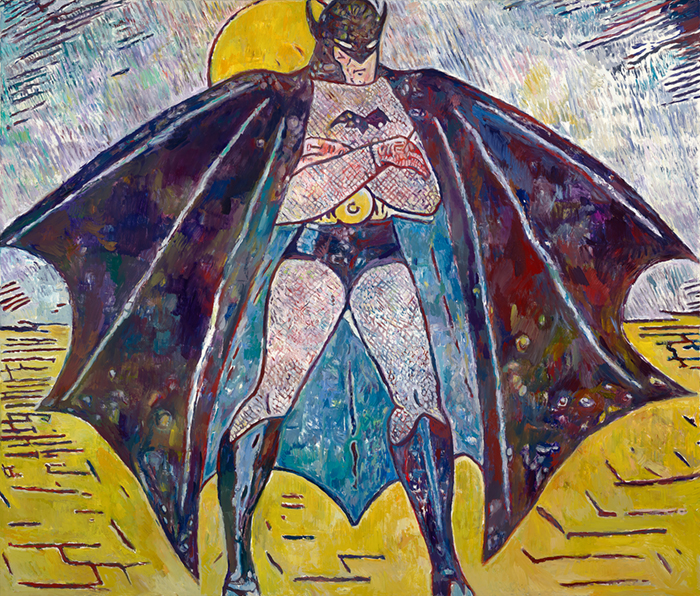 Mayerson’s optimism is grounded in his reverence for our greatest leaders, pop-cultural icons, political dissidents and commentators. Working from photographs, he employs a method actor’s strategy of immersion in his subject—listening to recorded biographies or albums as he paints to channel the spirit and determination of the figure and transmuting them into a complex accumulation of brushstrokes. It is precisely this emotional investment and commitment that imbues these portraits with a tactile manifestation of the artist’s earnest ambition to conjure images that transcend their sources.

A once-polarizing figure such as Malcolm X is rendered in razor-sharp detail but with a surprising, almost
impressionist conglomeration of color. The triumphant rebels of the Stonewall uprising, painted from a historical photograph, embodies the exhilaration of newly exercised freedom. Elsewhere, a view from the rim of the Grand Canyon (the flag at half-mast for the Sante Fe, Texas school shootings) is executed more freely en plein air reminding us that the symbolic sites of our national mythology are to be lived in and experienced first-hand, in the moment and for all the sublimity that they can offer. Youthful survivor-activists of recent school shootings, from a generation often dismissed in the media as disengaged, are immortalized here for their courage and sacrifice in standing up for their own safety and survival.

Strength and sensitivity are hallmarks of Mayerson’s ethos and aesthetic, and fictional voices join the chorus of goodwill here as well. Comic book superheroes and Kermit the Frog make appearances as representatives of our bravest and best selves. And, as every story must also have a villain, Donald Trump fills this role succinctly as the antithesis to the artist’s uplifting worldview.

Reflecting the artist’s practice of also creating and teaching comics, these paintings are deliberately installed to speak to one another, ultimately creating a collective, non-linear narrative spanning generations and disciplines. While operating as lovingly and laboriously crafted individuals, the works should be experienced, in exhibition, as another chapter in Mayerson’s cumulative amalgamation of paintings that make up his evolving, expanding American Dream. 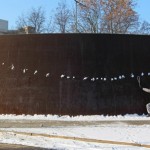