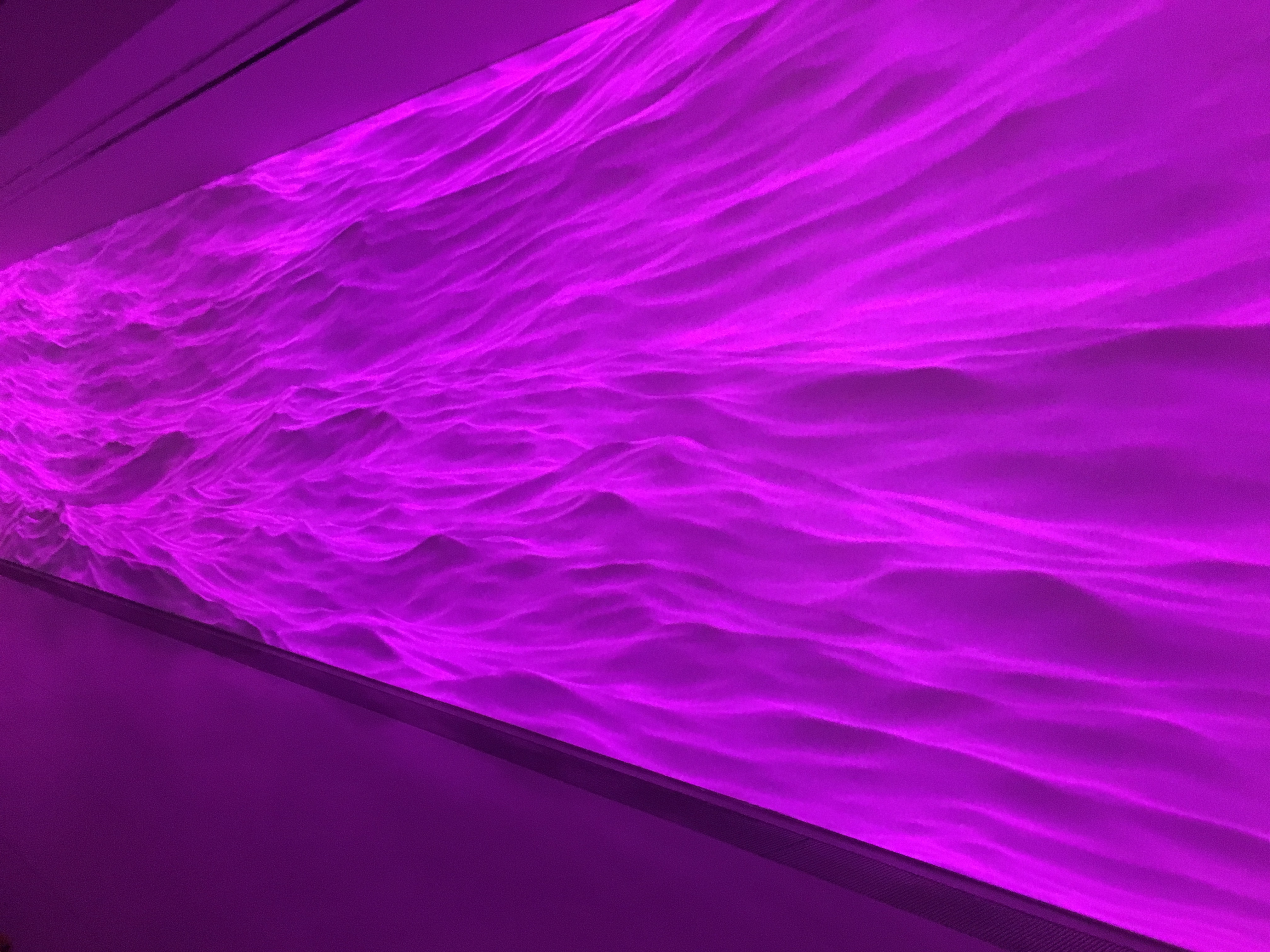 This week gave me a chance to consider human intervention in our environment. If Sondra Perry’s opening at the Serpentine uses digital tools to make our dark history extremely contemporary, Open Space Contemporary’s Adventitious Encounters exploits its location to explore our desire for nature in a technologically saturated world. The former analyses our interactions with race throughout history, whilst the latter observes us in our surroundings.  On the other hand, Hiraki Sawa’s Fantasmagoria takes us on a beautifully surreal sci-fi adventure driven by an extremely personal request and displays us humans as aliens in what we deem to be our own environment. 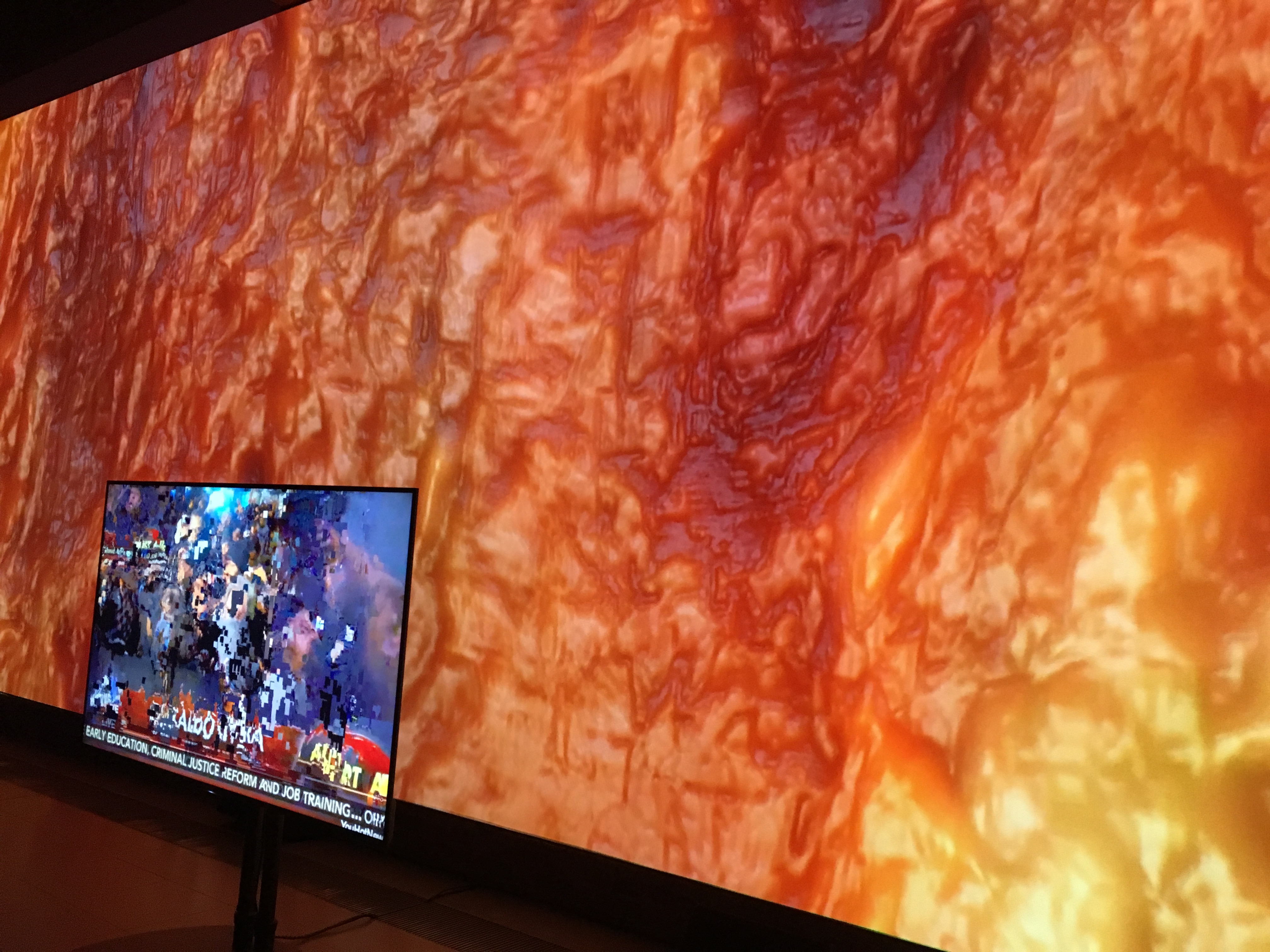 On Monday evening I made my way to Hyde Park’s Serpentine Sackler Gallery for the opening of Sondra Perry’s first solo exhibition in Europe. Upon entering a purple light bathed the room from both sides. As I walked around, this beautiful wave rippled across the walls of the gallery, occasionally morphing into a manipulated version of Turner’s Slave Ship (Slavers Throwing Overboard the Dead and Dying, Typhoon Coming On).  Perry uses her highly digital art to conduct an historical analysis. The warped Turner shows captain Zong drowning 133 slaves to claim compensation under an insurance policy. Whilst this bleak story isn’t figuratively apparent, it constantly dances around us, setting the tone for the exhibition. As we progress, within the two partitioned sections of the gallery, Perry seeks to elicit a greater reaction. In _TK (Suspicious Glorious Absence) an enlarged version of Perry’s skin becomes the unsettling backdrop for a series of video collages. We follow the unsteady camera through houses, rooms and suburban parks at night. We are intruding, just like the police officers described in the interview which plays over the footage. Perry’s most powerful and engaging works are her three-monitor workstations. In one, we are made to use a rowing machine, with heavy water resistance. As we row, the three screens facing us display the purple ripples and warped Turner whilst delicate chimes and Missy Elliot’s track play in our headphones.  Perry wants us to experience, albeit in a highly contained way, what it would have felt like to be on Zong’s ship. The heavy workload and soothing music are at odds and generate confusion within us. The second workstation involves a bike. As we pedal and grip the handbars, Perry’s bald avatar is extremely close to our face, confronting us with a monologue which focuses on colonialism and capitalism. She succeeds in generating an extreme sense of unease in us by luring us into a seemingly tranquil purple ocean, and then introducing more and more distorted, disturbing and inescapable bleak realities – all of which are the product of human intervention.

If Perry’s investigation explores human intervention from a more historical angle, Open Space Contemporary’s latest exhibition ‘Adventitious Encounters’ looks at our relationship with the natural world from an environmental point of view. 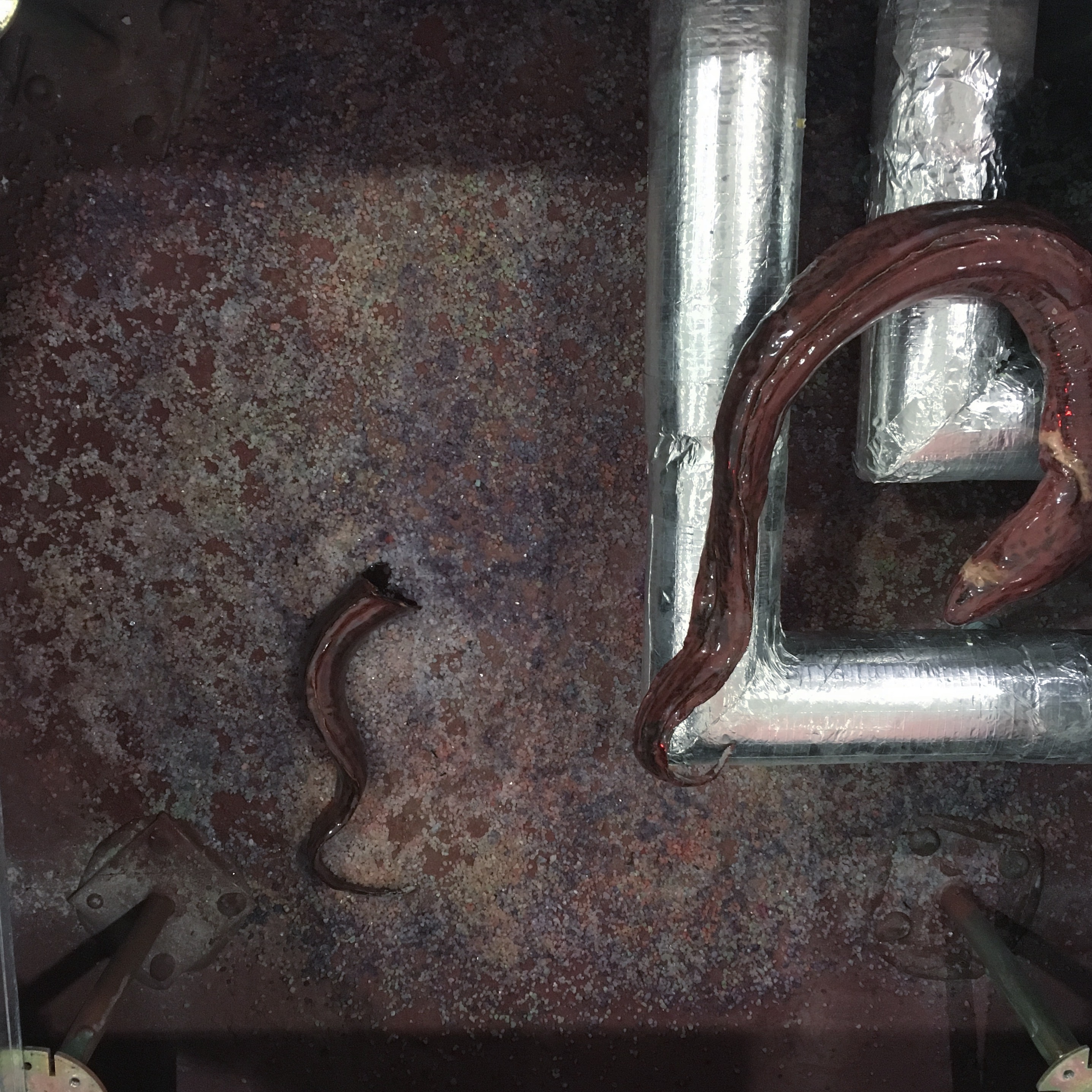 On Wednesday night, I was invited to the preview dinner on the fourth floor of Whiteleys Shopping Centre (and attempted to live stream it all on our Instagram). The location truly enhances the spirit of the show curated by Huma Kabakci and Anna Skladmann. The glass dome, inspired by the Crystal Place exhibition in 1851, was always supposed to host an Italian garden. Yet this vision was never completed and the entire floor was left unused. As Whiteleys is due to close soon, Open Space Contemporary populates it with plants, sculptures, canvases, video installations and performance pieces in an attempt to show that despite all our technological advances we still need nature and seek it.

Walking around we find Alexandre Mussard’s delicate chairs, whose limbs at times resemble twigs, as well as Samuel Padfield’s cube structures, which double as a home for silver ants and crickets. Paloma Proudfoot’s blackberry coloured snake finds a home suitable for its pigmentation beneath the floorboard. Soojin Kang’s natural pods hang from the ceiling, as if this were their natural habitat, and further along Kate McMillan’s panels oscillate ever so slightly with the breeze. McMillan herself gave an incredibly intense performance at the dinner, as she handed each of us a chalk stone whose form was replicated on her silk dress and the very panels displayed. 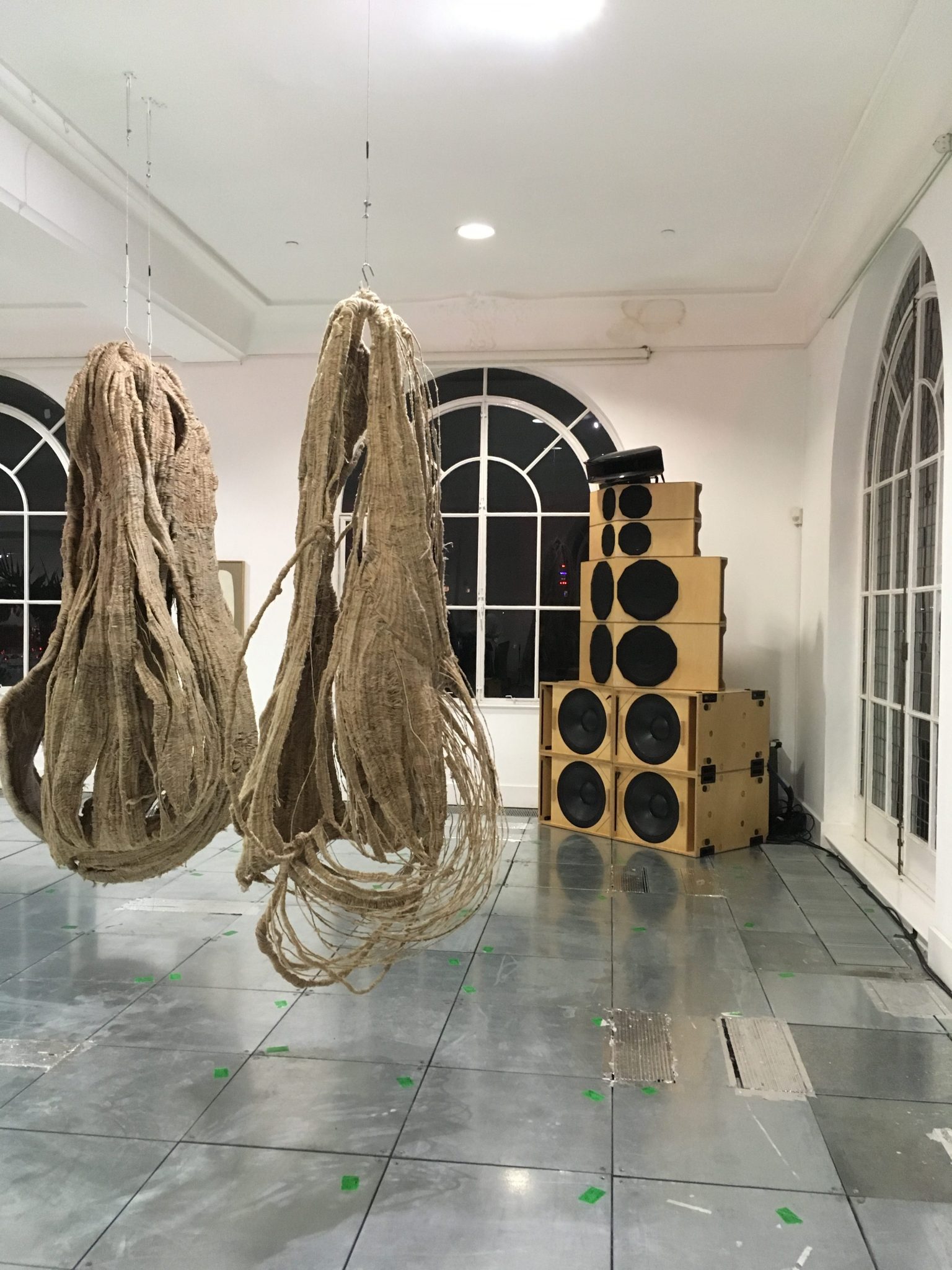 Adventitious Encounters seeks to engage all of our senses and as such, a series of events will be taking place during the course of the exhibition which we have listed here. Given how incredible the dinner was, and how it really brought not just the exhibition but the very shopping centre to life, I would highly encourage attending.

I concluded my week with a quiet gem, found at Parafin – namely the UK premieres of Hiraki Sawa’s new film works. In Sawa’s films, human intervention is perceived as absurd alien-like behaviour. 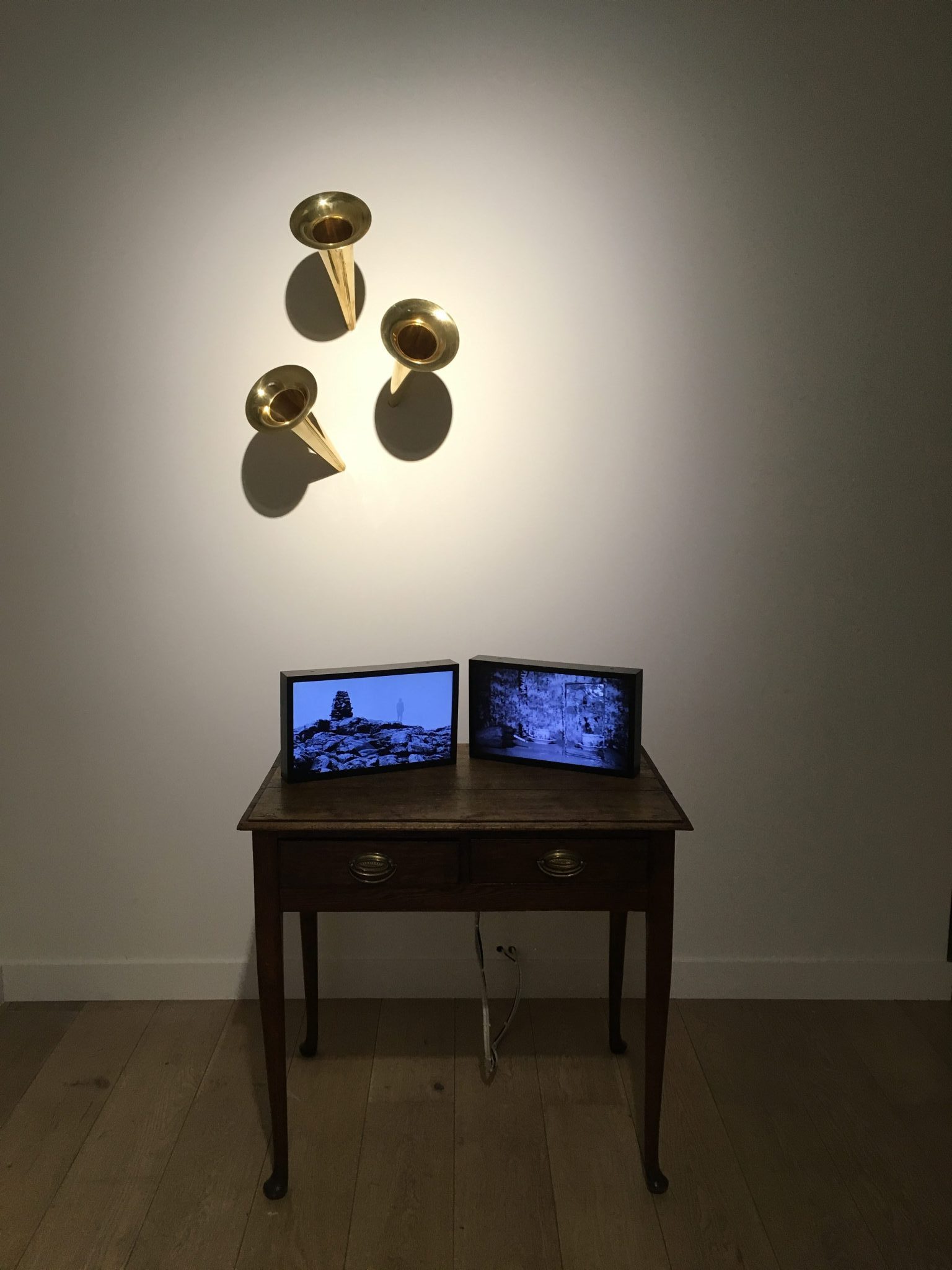 The two pieces that hypnotised me are fantasmagoria and fish story.  They are linked by a deeply personal story. Sawa’s grandfather suffered a stroke when young, so his wife, the artist’s grandmother, had to find ice in order to keep his bleeding in check. As they lived in an extremely remote part of Japan, this task was no easy feat. Sawa creates a mythical and fantastic journey on land and sea, whose focus is an ice block passing from landscape to landscape. In fantasmagoria, we see the beam of a lighthouse turning and turning and turning, suggesting we are approaching it. As the lighthouse isn’t visible though and we are in complete darkness Sawa makes us enter a parallel realm, one where the actions of fish story make complete sense. 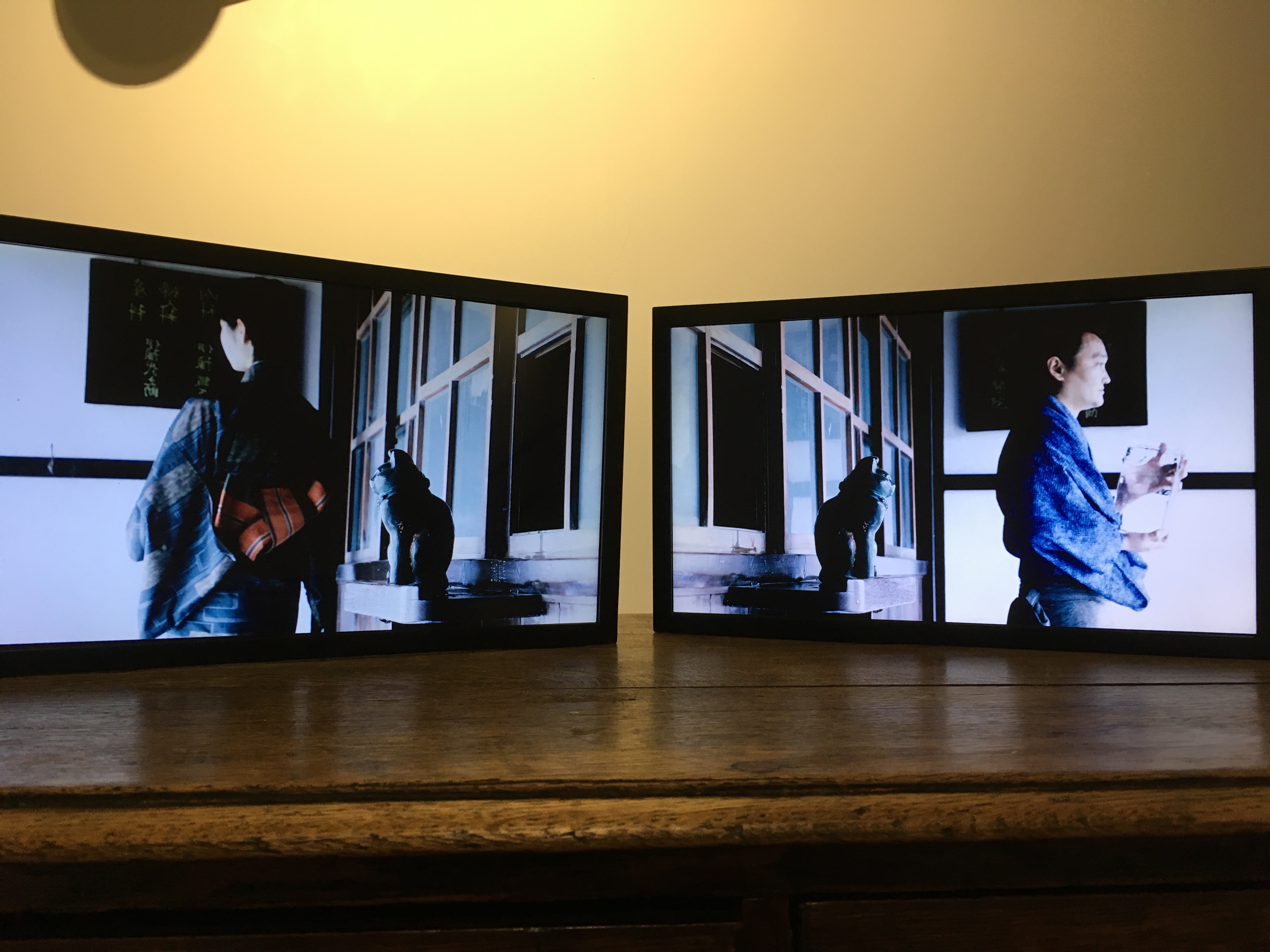 As we turn our attention to the two screens placed upon a desk, the three trumpets emerging from the white wall appear perfectly natural. The ethereal soundscape accompanies us as we observe the block of ice at a table, where tea is being served, then on a ship, then again near a man smoking a cigarette amongst tall grass. The block of ice is not solid at all times, rather, much like other figures in the eight minute film, it occasionally assumes the qualities of a ghost. Here the determination to fight nature is not seen as a human imposition. Rather, as this strength is deeply rooted in a personal relationship, the actions only appear alien and absurd if taken out of context. Again, Sawa shows how connected we are to our environment and how we depend on it. 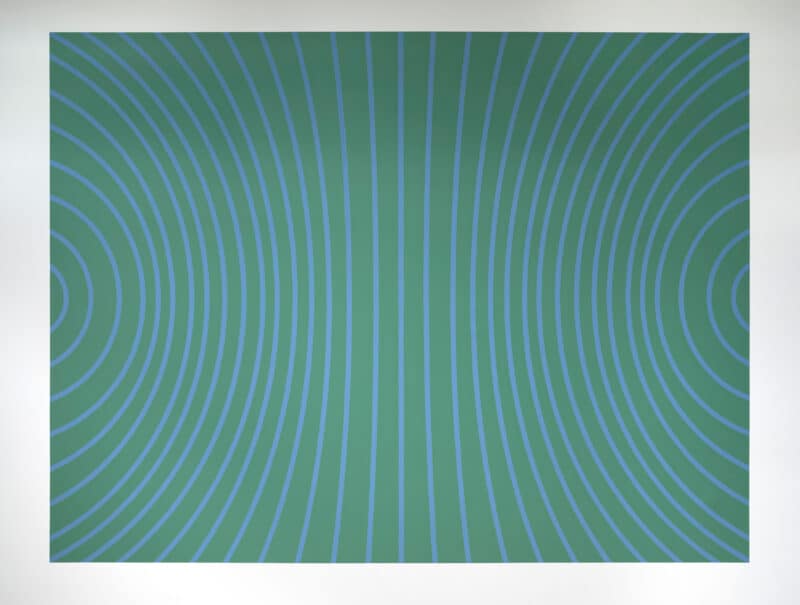 This is Fred Sorrell’s second show at Parrifin, alongside new paintings and works on paper the exhibition includes Sorrell’s first ever large-scale wall painting. (and it’s super-cool) 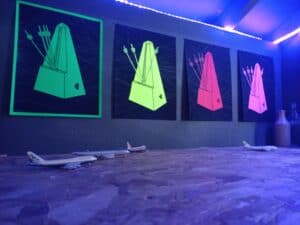